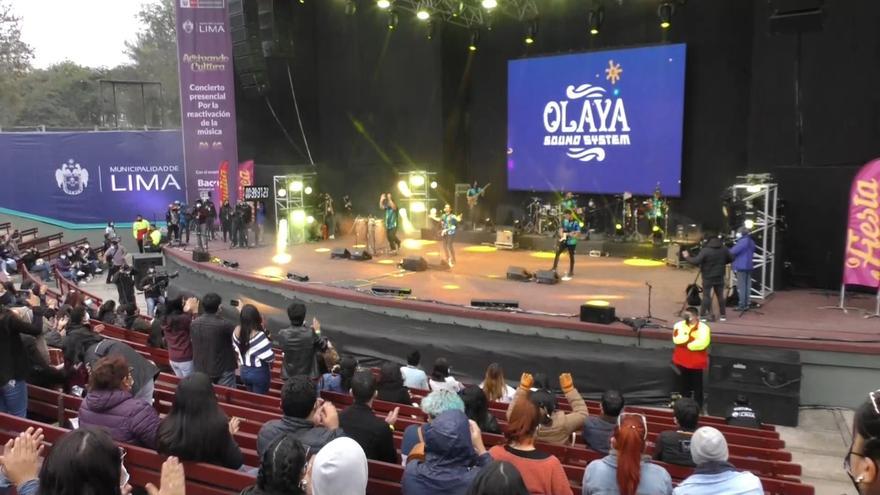 Lima, Jul 17 (EFE) .- Lima was the scene this Saturday of the first massive face-to-face concert that, in the open air, with limited capacity and biosafety protocols, has been held in Peru since the arrival of the coronavirus pandemic, in March of the year last, in order to reactivate the music industry affected by the health emergency.

This first large-format cultural event, under the title “For the reactivation of music”, convened for more than five hours about 1,000 people in the open space of the amphitheater of the Parque de la Exposición, in the center of the Peruvian capital.

The Ministry of Culture and the Municipality of Lima wanted to test the current biosafety protocols to promote the reactivation of the country’s cultural industry with this pilot show, which featured the participation of five musical groups of cumbia, salsa, folklore, fusion and electronic music.

“(This concert) is a very important proof that, with all the security protocols, we can begin to have more massive events, which are important, beyond the economic reactivation, to also reactivate the spirits of the people and above all of the cultural world, “the Minister of Culture, Alejandro Neyra, told Efe.

The minister specified that, although the performing arts protocols had been approved since the end of last year, the second wave of COVID-19 infections prevented this pilot concert from being held in January, as was initially planned.

He recalled that the initiative, launched “luckily at the lowest moment” of the pandemic and in the month of the bicentennial of Peru’s independence, is part of the “Activating Culture” program, which has a program of artistic activities in public spaces from different regions of the country.

As explained to Efe Fabiola Figueroa, manager of Culture of the Municipality of Lima, the Exhibition Park, where the show took place, “has a capacity of 4,000 people and for this activity about 25% have been delimited, which are 1,000 people “.

Before entering the venue, the organizers took the temperature of the attendees, verified the use of the double mask and sprayed their hands with disinfectant gel, in addition to placing a bracelet that indicated in which sector of the public they should be located with their bubble group.

Figueroa added that “all the artists, technical and production staff have gone through covid discard tests previously.”

Among the audience, he highlighted the presence of young people who, in the words of Minister Neyra, “of course have all the desire to experience again what they have not lived for more than a year.”

Asked about the convening power of this first massive appointment, the holder of the Culture portfolio mentioned that, “the possibility of registering for the raffle” of tickets, which were free, was barely opened, “almost 10,000 people entered”, that is, , ten times more than the capacity allowed for this occasion.

The young Rosana Vera, one of the lucky ones who managed to enter, acknowledged to Efe that she felt “very happy to be able to appreciate the culture” of her country and “feel better emotionally.”

In the same vein, Erick Carranza, a 23-year-old young man who called this initiative “very good” “to reactivate the economy” and that people have fun, was expressed to Efe.

“That it continues like this and that everything is reactivated because we are already tired of the pandemic,” said Carranza.

The show began with the presentation of DJ-Chemical Neon, who was followed by Amaranta and the group Olaya Sound System.

Then it was the turn of the salsa orchestra Son Tentación and, finally, the show closed with Armonía 10.