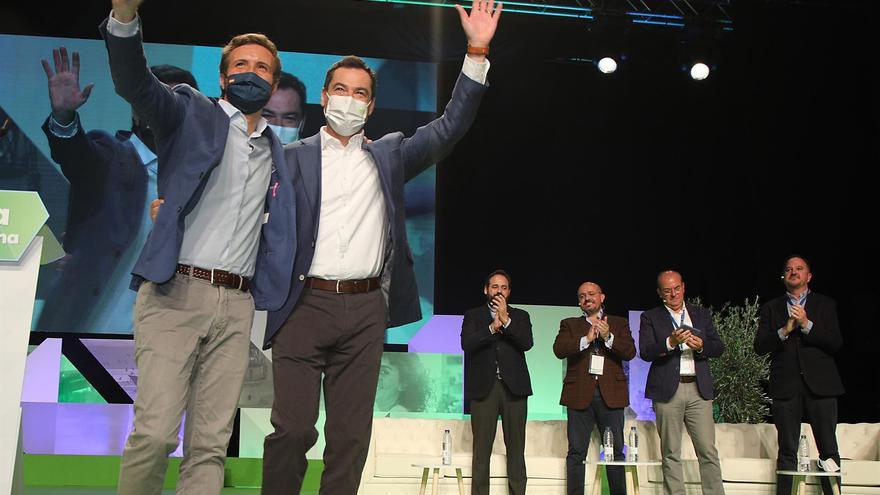 The president of the PP, Pablo Casado, has closed this Sunday the XVI Congress of the PP of Andalusia, which has re-elected Juan Manuel Moreno for the third time with a majority to the Bulgarian who has touched 99% of the votes of the more than 1,000 delegates who have participated in the three days that the conclave has lasted. A congress that was marked by the leak of an old audio of the vice president of the Board, Juan Marín, which has exploded the negotiating strategy of Moreno’s fourth budgets, until Isabel Díaz Ayuso arrived. The Madrid president arrived on Friday and took all the headlines when she snapped: “I want to recommend that you fly free, that you make your own decisions, only those who behave like a puppet wears out.” A phrase that the entire PP interpreted as a reproach to Casado for possible interference on when the Moreno elections should be called. The party leader has responded in his long speech in Granada: “Personalism does not fit in the PP, this is not a ‘talent show’ of megalomania.”

Casado has not skimped on metaphors to harshly criticize the individualistic drift that, without mentioning it, he has attributed to Ayuso. “We are a great team, a great orchestra. There is no room for soloists, we are a tuned, harmonic orchestra, in which the main thing is a project. With a strong, united, synchronized score. We are not the sum of individualistic plans. The personalism does not fit in the PP, “he said, at the beginning of a long section of his speech that can only be noted as an internal key message.

“We are too important to put the interests of each one above and risk the immense responsibility that we have in a bonfire of vanities that leads nowhere,” he continued. “This is not a talent show of megalomania, it is an instrument to improve people’s lives. It requires humility, unity, to be clear about things and dedicate ourselves to what is ours, to solve the problems of our compatriots, “he added.

But they have not been the only internal references. Casado has also launched a message about his own project, about its validity, and has defended the decisions he has made since he was elected president of the PP in July 2018. “The sand on Sánchez’s clock is running out,” he said. “Our time has come. The change is unstoppable and we are doing well. Keep in mind that we are doing well,” he proclaimed. “We have a fixed course, the sail oriented. Sometimes there will be more wind, more swell, but a calm sea has never made a good sailor,” he said.

“We know what our trajectory is and we are very close to our destination,” he insisted. “We are the clear alternative of the Government. Despite whoever it may, despite everything and everyone. I know what I have to do and nothing and no one is going to mislead me from that path,” he added. “We have shown that we do not admit pressure,” he defended himself. “We did not admit them when they told us to make Pedro Sánchez president or when they said that we had to support I do not know what motion,” he assured, in two references that can be placed in the drawer of responses to the recent book by Cayetana Álvarez de Toledo .

Casado has concluded: “No insidiousness, no insult is going to divert me from that path. We have our own Resistance Manual [título del libro de Sánchez]. I ask you to move on, with examples such as the Junta de Andalucía with Juan Manuel Moreno “.

Casado has also addressed in his speech the other issue that has mediated, and overshadowed, the XVI congress of the PP of Andalusia, the alleged interference of the national leadership for Moreno to advance the elections, scheduled for the end of 2022, and thus reinforce the ” alternative “to Sánchez who, he said, represent him and the PP.

The president of the Junta de Andalucía was seeking an agreement with the PSOE to get the Budgets for next year, but the leak of Marín’s audio ruined the options and allowed the Socialists to leave conversations that not everyone had of course they could benefit. The leader of Citizens in the region and vice president of the Board pointed to his former partner Fran Hervías and, therefore, to Genoa, where he works now.

Be that as it may, the leak starred in the days before the conclave and the differences in strategy between the national and Andalusian leadership were unearthed. In this context, Ayuso’s words occurred last Friday, which forced Genoa to make it clear in public that they would give Moreno the “freedom” to convene when he prefers, although with minimal options for the 2022 accounts to be approved. which makes it difficult to conclude the legislature.

He did it on Saturday number two, Teodoro García Egea. And the leader has done it again this Sunday. “What has to happen in Andalusia was decided, has been decided and will continue to be decided by Juanma and the Andalusian PP”, he said. “Some are very interested in the issue of the date of the elections,” he added, a subject that, he assured, “they have never” talked about, except in March 2021, when the motion of censure was presented in Murcia that caused the electoral advance of Madrid that supposed the rupture between Casado and Ayuso.

Then, Casado recalled, he told him “something that I literally repeat in front of you today.” “I told him by phone from Congress: ‘Juanma, you have my full support to do what you consider. Think first of Andalusia and then of the party, because the interests of the Andalusians are the interests of the party.” The leader of the PP has settled: “All the support, the hands free, to do what you consider to be the best for Andalusia, which will be the best for Spain.”

Married claims back support for his project

The national president of the PP has also recalled before the more than a thousand attendees to the plenary session of the Granada Conference Center that he “turned” in the Andalusian elections of 2018, held a few months after his triumph over Soraya Sáenz de Santamaría, who had received the support of Juan Manuel Moreno in the internal conclave that decided the succession of Mariano Rajoy.

Casado has made a slight reference to the media noise of recent days, a consequence of his war with Ayuso, starring, he said, “for those who entangle”, a quote from the speech that Moreno gave on Saturday, and in which he asked to be left ” from sterile tangles that do not interest to nobody”.

The leader of the PP has said that “those who entangle” are the same ones who told him in 2018 “be careful, this may not go well, you have just arrived” in reference to the December elections of that year in Andalusia. “But when the elections were called, I took to the road. I did 75 events, in small towns, big cities, on the coast, in the mountains,” he pointed out. “They had to inject me with urbasón, we used propolis and medicines,” he recalled. “But it was worth it. Some did not believe in him, but the majority of the party and the Andalusians always believed in Juanma Moreno,” he pointed out.

“The entire party at the national level supported the PP of Andalusia,” he said. A message that, with the Ayuso war totally unleashed and with no signs of closing, connects directly with the “our time has come” that he said minutes later.