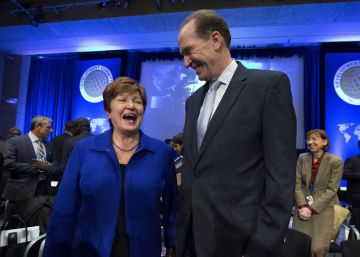 A few letters have shaken in the last two weeks the two large multilateral institutions based in Washington: the International Monetary Fund (IMF) and the World Bank (WB). Two of the couriers were signed by their top leaders, and both announced the progress of some of their heavyweights. All these ceses are surrounded by controversy.

David Malpass, president of the BM, announced on February 5 his regret for saying goodbye to Penny Goldberg, the first female chief economist of the institution only one year and three months after his arrival. In the second email, dated February 7, the IMF managing director, Kristalina Georgieva, affirmed – without too many detours – that she had decided to do without number two of the agency, David Lipton. The Fund also dispenses with its administrative director, Carla Grasso, only a few days after having renewed it.

The storm is more intense at the World Bank. The goodbye of Goldberg has coincided with the appearance of a report signed by an investigator of the own organism that related the flow of international aid of this organization with the exit of money to tax havens. The idea that the funds that the World Bank distributes go to the elites of the country in need, and not to the supposed recipients of the aid, is explosive material for an agency that is dedicated precisely to assist developing countries. And more if it bears the signature of a house economist. The Economist detailed this week how the publication of this scientific article had been blocked by senior World Bank officials.

“Do elites capture development aid? We document that aid disbursements to countries highly dependent on international aid coincides with a significant increase in bank deposits in low-tax financial centers known for their banking secrecy and wealth management private, “researchers Jorgen Juel Andersen (of the Norwegian Business School), Niels Johannesen (of the University of Copenhagen) and Bob Rijkers (of the World Bank) write in an article dated December 13. The version of this article available online specifies that it is still pending approval by the BM research department.

“The draft of the article Elites that capture international aid was subjected to several revisions in which its result was improved. The revised text addresses several comments that emerged during the review process,” the WB said in the controversy with a statement released on Tuesday.

Goldberg is not the first to leave the BM ahead of time. His predecessor, Paul Romer, was left without his post in January 2018 two weeks after admitting in an interview that Chile chaired by the socialist Michelle Bachelet had been punished for political reasons in the classification prepared by the publication of the BM Doing Business. Romer left the agency only 15 months after his landing in Washington, a record that now his successor.

“It has been a difficult decision, but I feel that this is the right time to return to my work at Yale,” Goldberg wrote to his colleagues in an email to which this newspaper has had access.

But more mails have shaken these weeks around 19 Washington DC, the street that separates the headquarters of the two agencies. On February 7, just two days after Goldberg’s farewell email, the IMF chief announced to her staff the march of David Lipton. “I have decided to make some changes in the team that leads the Fund,” Georgieva wrote to his subordinates, without hiding that Lipton’s departure was his decision.

A few hours later, the affected person sent another email in which he did not go through the branches, and acknowledged leaving without another professional project. In addition to taking nine years as deputy managing director, this American who worked in the Obama Administration had the day to day of the agency and was respected for his knowledge of the international economy. For the previous managing director, Christine Lagarde, more focused on carrying the message of the Fund – and her own projection – outside the agency, this did not seem to be a problem. But Georgieva has made it clear that the reorganization is his business and that he wants to have a more direct interaction with the department directors. Neither she was comfortable with Lipton, nor Lipton was comfortable with her. His march was a surprise even for the highest leaders of the Fund.

The question now is who is in charge of the IMF. Lagarde teamed up with his prestigious chief economist, Olivier Blanchard, and with Lipton. Now, the two are out. Blanchard was succeeded by Gitah Gopinath, a powerful economist who lacks the influence of his predecessor. And it is speculated that Lipton’s replacement – with a broad political, professional and academic career – is the Acting Deputy Secretary of the Treasury Geoffrey Okamoto, a 35-year-old former KPMG consultant without extensive experience in international finance before being signed in 2017 for Donald Trump’s team.

Surprisingly, the president of the United States did not touch Lipton despite his past in a Democratic Administration. But Georgieva-driven reorganization is a golden opportunity for Trump to put one of his own in the IMF dome.