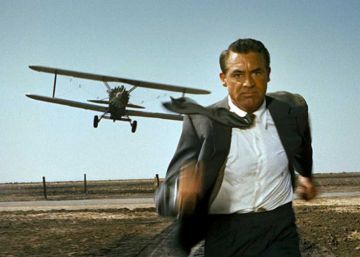 We were wondering last week by the construction of the Gray code in the decimal system. As our "featured user" Manuel Amorós points out:

That is why Gray himself called "binary code reflected" to the binary version of his code.

In the last weeks we have talked about the alphabet Morse, the I Ching, the code Gray, the Bacon encryption… I invite my readers to comment on other variants and applications of the binary system.

And a problem posed by the same reader about a swimming mouse that tries to escape from a cat (see comments of last week) has aroused interesting geometric reflections and has brought up a classic theme of logical riddles: that of the persecutions. Without doubt the most famous is that of Achilles and the turtle, a classic paradox rather than a riddle; but the subject is inexhaustible. Let's see some examples.

Let's start with a classic "trickster" to de-numb heated neurons:

In a speed race, you advance to the one that goes in second place; Where do you go after overtaking?

A hare carries an initial advantage of 60 of its jumps to a dog. The hare gives 4 jumps while the dog gives 3, but the dog in 5 jumps advances as much as the hare in 8. How many jumps should the dog give to reach the hare?

And an example of the complementary theme of the persecution, which is the distance:

Two cars leave at the same time a roundabout on different rectilinear roads. After one hour a car has traveled 20 km more than the other, and the distance between them exceeds by 20 km the one traveled by the fastest. What can we deduce from these data?

And since we are in time of baths and-unfortunately-water accidents, one of rescue: