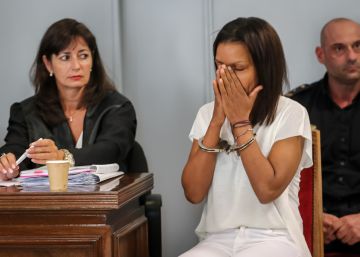 Ana Julia Quezada He has received in his cell of the prison of Almeria the sentence that the sentence to permanent prison revisable for assassinating with luck to Gabriel Cruz, The eight-year-old son of his partner. Judge Alejandra Dodero, from the second section of the Almería Hearing, has imposed eight years and three more months of imprisonment for two crimes of psychic injuries and against the moral integrity of the child's parents. In the decision the aggravating relationship is applied.

The Dominican immigrant, 45, is the first woman to receive this controversial grief, a de facto life sentence, requested by both the prosecutor, Elena Fernández, and the lawyer of the child's parents, Francisco Torres, after the popular jury found her guilty of murder with alevosía on September 19. He received the hieratic verdict, without tears for the first time throughout the course of the trial, which lasted for 11 days. In the litany of proven facts, as in the sentence, the narration of Gabriel's last day of life, on February 27, 2018. Quezada surprised the boy that afternoon, after taking him to a family estate in Rodalquilar (Almería) , and asphyxiated him until his death. Then he buried him and spent 10 days feeding the hope of Ángel Cruz and Patricia Ramírez, the parents shaken by grief and uncertainty. Until she was arrested with the body of the child in the trunk of his car.

According to the sentence, Quezada will not be able, if he leaves prison, to live in Níjar for the next 30 years. In this Almeria municipality, the child's parents live. Nor can you go there or approach within 500 meters of the parents. The sentence forces you to pay them 250,000 euros each for moral damages. You will even have to pay what the State spent looking for Gabriel, 200,203 euros.

The ruling states that the boy left with Quezada on the afternoon of his death "before the trust granted by the accused, a person closely linked to his family environment," to a remote farm in Rodalquilar. The father of the child and the damned were a couple and lived together. Therefore Gabriel also did it in the periods that corresponded to him being in paternal custody. "It should be added that the accused was aware of her superiority over the child," the sentence continues, "which weighed only 24 kilos and measured 1.30 meters." "In this situation of trust, away from the urban center and in the case of a child of only eight years, Quezada, taking advantage of the situation described suddenly, suddenly and obviously intentionally took the child and threw him against the floor or wall" . Then, "with his own hands he covered his nose and mouth tightly, until he conquered his resistance and caused his death."

The magistrate recalls that when the surprise and convivial alevish takes place, the law contemplates that the crime of murder be punished with 15 to 25 years in jail and being the victim under 16 years of age the penalty that corresponds to it is a permanent reviewable prison.

Gabriel's search lasted for 11 days, at which time the damned "pretended to be afflicted and upset, encouraging the moods of relatives, and generating false expectations about the appearance of the child, getting involved in the search, developing an attitude of simulation, pretense and public and notorious farce ". In this sense, the ruling emphasizes that he told the parents: "Today we will find him, today he will appear, we will give him Coca-Cola, the boy told me that morning that he wanted to call you - referring to the mother - and I told him that in the afternoon when his father arrived. "

Also remember how on March 3, to distract attention in the search for the child and in order to address suspicions about his ex-partner, as well as with the "intention of adding more suffering to the parents", he placed a child's t-shirt on you kill, in a reed of a secluded place and difficult to access. Already on March 11, he unearthed Gabriel's body from the estate of Rodalquilar, put it in the trunk of his car and on the way to Vícar (Almería) uttered expressions of "absolute contempt" to the child. "All these acts carried out by the accused made them wanting and being aware that the suffering of parents increased, impairing their psychic health, and also with them deliberately wanted to vilify, humiliate and vex both parents," he concludes.