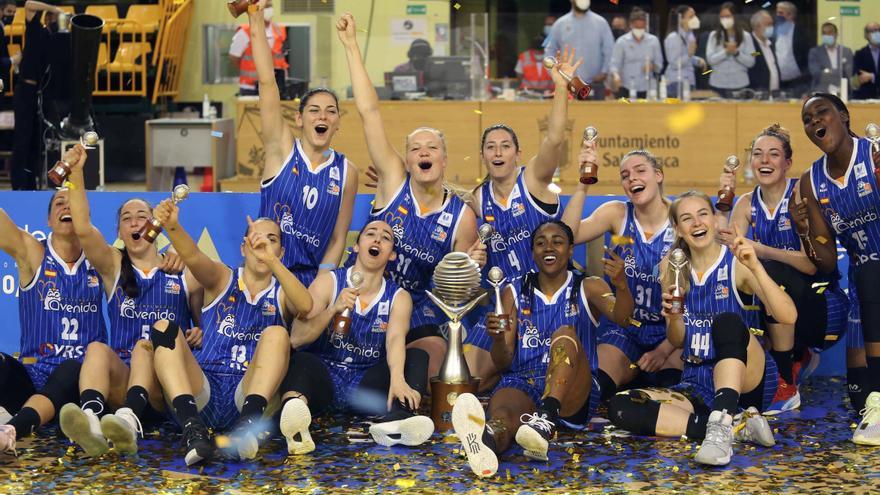 The Perfumeries Avenida He beat Valencia Basket (76-61) this Thursday with a great defense and achieved his seventh Endesa Women’s League against a too erratic opponent.

The first 20 minutes were even, like the rest of the games that the two teams have played this season, although from minute five of the third quarter and, above all, in the last quarter, the Salamancans closed the defense and flew in attack , while the Valencian women fell into a pothole from which they could not get out.

It was the match with the most difference between Perfumerías Avenida and Valencia Basket, forged in a great defensive game by the locals and in their success in shooting.

The first quarter started with great intensity, with the same system as in the other two games of the final, although Valencia began ahead of the game in effectiveness, with a triple by Allen that led to Roberto Íñiguez to call the first time out with a 2-9.

From that moment, Avenida began to close the defensive rebound and have more success in the shot, especially from Hayes and Silvia Domínguez, as well as a triple from Mayte Cazorla, with two minutes remaining. put the Salamanca women ahead.

The attacks beat the defenses in the first quarter, with great equality both in game and in effectiveness, with a certain offensive madness in which all the players put what they threw.

Valencia started the second quarter with a zonal defense to avoid the game of Samuelson, although Leo Rodríguez quickly broke it with two consecutive triples that led Rubén Burgos to request a time-out at the minute of play.

But from that moment on, Perfumerías Avenida had its best moments, with triples of Hayes, Silvia Domínguez or Mayte Cazorla, which made the Salamancans go on the scoreboard by nine points of difference (37-28) with five minutes to go.

However, the Valencians managed to recover, hand in hand with Queralt Casas, and they maintained the differences between four and six points until going to rest with a 42-37.

The return of the changing rooms made Valencia Basket resume the game with force in defense and with more success in attack, which led to it reducing the difference to two points thanks to an unsportsmanlike offense by Hof made to Trahan-Davis with four minutes to go, although Mayte Cazorla and Katie Samuelson returned the tranquility to the Salamanca with two consecutive triples.

Not a technique to Roberto Íñiguez prevented him from reducing the differences, especially because Valencia Basket did not hit his shot, neither inside nor outside, and, in addition, the game of Perfumerías Avenida continued to be intense in defense and agile and effective in attack, which resulted in a 57-50.

In the last quarter there were some errors in defense on the part of the Valencians, while the Salamancans followed their own, very iron under their hoop, with Silvia Domínguez in the game direction with intelligence.

In the absence of 6:40, Avenida went on the scoreboard with 12 point difference and Valencia Basket made too many errors in defense and was erratic in the shot.

From that moment on, The women from Salamanca insisted on their strong defense, while the Valencians did not have their day and little by little the difference on the scoreboard widened.

Pavilion: Last match of the Endesa League final played in the Salamanca pavilion in Würzburg before 700 people due to the capacity control for the measures to deal with the pandemic. Among those attending the meeting were the president of the Junta de Castilla y León, Alfonso Fernández Mañueco, and the president of Mercadona and maximum shareholder of Valencia Basket, Juan Roig.