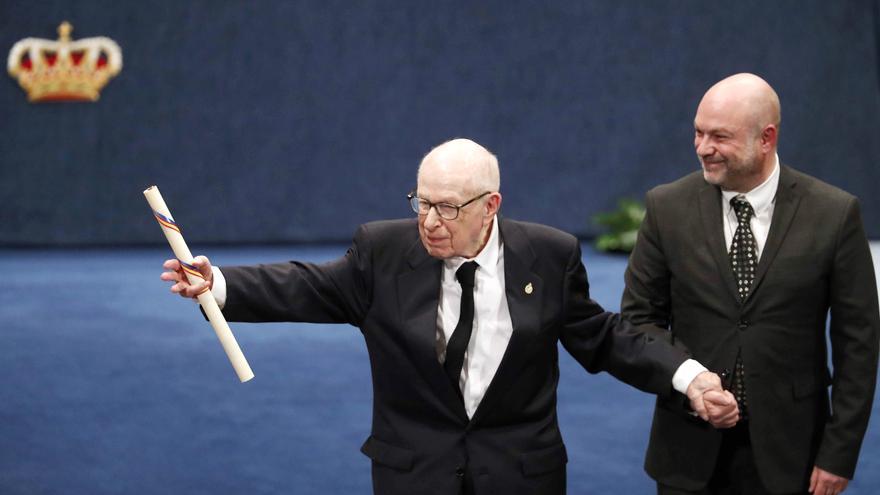 Barcelona, ​​Jun 30 (EFE) .- At 96 years old, Peter Brook, one of the greatest living European theater creators, continues to “search for the essence” in each of his productions and distrusts those who seek perfection and believe they know where it is found because, in his opinion, “perfection does not exist.”

Brook made these reflections today with a very fine thread of voice, almost inaudible, and a smile, during his visit to Barcelona, ​​the city where he will premiere “Tempest Project” at the Grec Festival next Friday.

The British theater director continues to enjoy the creative process intensely and has traveled to Barcelona to closely follow the rehearsals and be present at the premiere.

But age is unforgiving and the meeting he had this Wednesday with a group of journalists had to be interrupted shortly after starting because he felt weak.

Before retiring, he had time to emphasize that “the important thing is to bring to light the essence, which is usually hidden, precisely because it is essence.”

A work to which he has dedicated a lifetime, since he began in the theater as a young prodigy, who at the age of 22 was already director of the Royal Opera House.

A search that never ends, as he has stated, because “perfection does not exist” and “we have to be modest and respect the unknown.”

“When sometimes I hear someone say, for example, that an interpretation of Hamlet has been perfect, I think that that person is simply an idiot, although he can also be a fascist or even a criminal,” he has sentenced.

For this reason, he has no problem going back over and over to the same works, with the certainty that each time he will discover something new and no montage will be the definitive one.

As he has done with “The Tempest”, a Shakespearean play that he has staged twice and about which he now returns for the third time in “Tempest Project”.

In this theatrical piece “human beings are not puppets, they are people, all different from each other, who carry a storm inside that they have to calm down,” he pointed out.

According to Brook, “there are characters devoured by greed, by anger, by the desire for revenge, but there is also a desire for freedom and the ability to forgive.”

“The latter is very important – he insisted – because everyone commits faults, but you have to forgive.”

“Resonance” is another concept that greatly interests Peter Brook, who started the work of “Tempestad Project” in workshops with actors from different origins who “repeated Shakespeare’s phrases looking for resonances”, as Marie-Hélène Estiennev has pointed out. , who signs the adaptation and staging with Brook.

“In Shakespeare, each word makes sense and in each sentence there are things that cannot be explained. It is poetry, but also simplicity,” said the director.

“Tempestad Project” is conceived as “a project in progress, a rehearsal” that has only been seen “in a workshop format” in Montpellier (France) and which will be premiered next Friday for the first time in a normal theater, according to the director. del Grec, Cesc Casadesús.

This work represents Brook’s return to Barcelona, ​​a city that he fondly remembers because his montage “La tragedia de Carmen” marked, in 1983, the conversion of the Mercat de les Flors into a scenic space.

The last time he passed through the Grec was in 2011, when he brought to the Montjuïc stage a minimalist version of Mozart’s opera “The Magic Flute” (“Une flûte enchantée”).

In 2019, the director received the Princess of Asturias Award for the Arts in recognition of his work as a great renovator of European theater, whose followers and disciples are counted by dozens among the best authors of later generations.