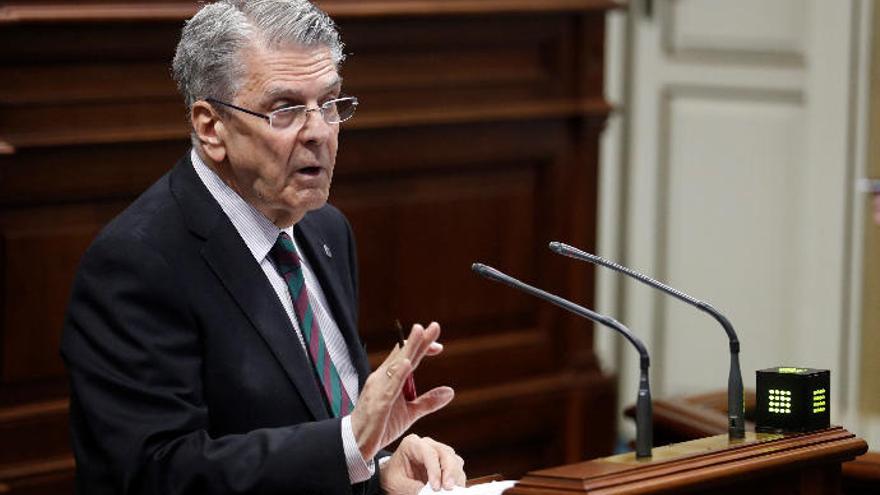 The Minister of Public Administrations, Justice and Security of the Canary Islands Government, Julio Pérez, has warned this Tuesday that immigration will never end and that, before it, the Executive has exercised its responsibilities within the margin of its powers and has demanded responsibilities on the matter to other administrations like the European Union or the central government.

During his appearance at the request of the Nueva Canarias, nationalist and socialist groups, Julio Pérez stressed that the archipelago can expect from the EU a comprehensive agreement to regulate immigration again or a reinforcement of Frontex, and the State, the increase and improvement of reception spaces, recovery of repatriation or increase of referrals.

The counselor has quoted the president of the European Commission, Ursula von der Leyen, on the future European pact on immigration which intends, among other aspects, to address the phenomenon from a humanitarian point of view, in a coordinated manner among all the governments of the Union, and which ultimately provides a continental solution based on the principles of solidarity.

Because, Julio Pérez added, migration has always existed and will continue to exist, it will never disappear and, therefore, all of Europe and the entire Canary Islands must learn to live with it and manage it in the best possible way.

“There is no single solution. The problem does not disappear whether or not there is one government or another”

The counselor has also said that the debate on this issue is not established between political right and left, between good and bad, or between opposition and government, but simply between those who know or do not know that immigration is inherent to human beings and a A complex phenomenon that is not subject to the risk of the management of a specific government.

“There is no single solution. The problem does not disappear whether or not there is one government or another, that idea is a very serious mistake. We try to ensure that the impact of immigration on the Canary Islands is one that cannot be avoided or avoided, “insisted Pérez, who recalled along these lines that the Canarian borders are unique throughout the world because they do not coincide with the beginning of another country and they are especially dangerous.

Competences distributed throughout the migration process

Pérez has reviewed the powers distributed throughout the entire migration process, which begin by preventing departures from the sending countries, for which the European Union and the General Administration of the Spanish State intervene.

During the voyage, the main objective is to avoid shipwrecks, an effort that also falls to the EU, although in maritime regions near the archipelago’s coasts the Canary Islands rescue services intervene.

The State is once again the main agent both on arrival, with a view to providing health and humanitarian assistance, and on subsequent stay, to offer them decent accommodation, as well as the expatriation, repatriation or expulsion processes, although in both cases they may intervene somehow the Canarian administrations.

And he has reviewed the figures to date, which determine the arrival of almost 5,600 immigrants to the Canary Islands, 20 of them deceased, that 3,243 of which are housed in reception centers “in dignity conditions”, and that some 1,400 have probably been transferred to the peninsula.

“I say probably because Interior does not officially distribute a figure. She thinks that if she distributes it, she creates a knock-on effect, “the area councilor observed.

However, the spokesman for the nationalist group, Mario Cabrera, and the popular, Astrid perez, have been very hard on the Government of the Canary Islands, and have reproached them abandonment of functions and lack of interest and demand to administrations with more powers in migration matters.

Mario Cabrera has accused the regional Executive of promote xenophobia among citizens for their improvisation in the matter, for being irresponsible and disorganized, for avoiding demands on the Government of Spain regarding a compromise around the immigration problem, and for hiding behind their lack of competences without noticing that at the same time it is their responsibility.

Astrid Pérez has described the migration data so far this year as a “political shame” for the Canarian Government, a lack of interest and “dehumanization”: “Allowing what they have allowed is xenophobic”, has finished off.

“Allowing what they have allowed is xenophobic”

And he has linked the numbers of arrivals during the term of Mariano Rajoy (PP) with those of the current president, Pedro Sánchez, a fact in his opinion “revealing”: “during the first half of 2018, 17,000 irregular immigrants arrived in Spain. Six months later, with the PSOE, 45,000. And we heard the left during those years say that it was the PP’s fault, but now it is not theirs, “said the popular spokeswoman.

To which Julio Pérez has responded, in his last turn to speak: “I condemn the intervention of the PP. Is it the change of government in Spain that makes more immigrants come? it is the simplicity, the ignorance, the ignorance of the migratory complexity. Do you think that governments do nothing? I won’t say it’s not our responsibility, but is that your outstretched hand? ”

Melodie Mendoza (Agrupación Socialista Gomera), Francisco Déniz (Sí Podemos Canarias), Nayra Alemán (PSOE) and Luis Campos (Nueva Canarias), spokespersons for groups of the parties that are members of the Government, have agreed to regret the facts, the figures and the lack of sufficient means to face an immigrant arrival that in no case causes a call effect, but rather comes from a “flight effect”.