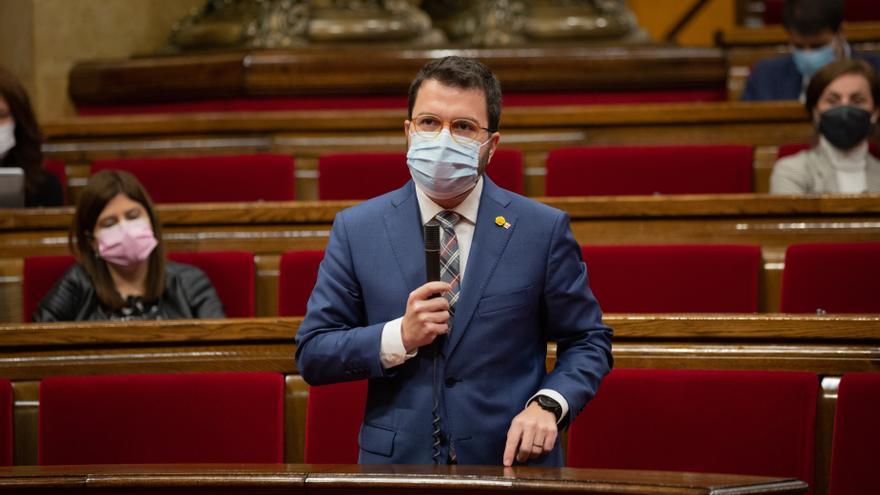 The vice president of the Government and ERC leader, Pere Aragonès, denied this Wednesday during the control session in Parliament that the Health Department or any other has made irregular contracts in the management of the pandemic, as investigated by the judge that the Last week he directed the Volhov operation against several businessmen linked to the independence movement. “No, there is no contract for the supply of tests by Salut with the people who are involved and accused in this procedure, nor any contract in the field of residences”, has rejected the economic head of the Generalitat, who has encouraged to the opposition has to look in the registry of public of contracts on these awards.

In understanding Aragonès, the investigation carried out by the court of instruction number 1 of Barcelona is based on a “police malpractice” and has “many loopholes.” “An attempt is made to build a story based on conjecture,” said the vice president, who highlighted the trust he maintains in all public officials who are managing the pandemic. “No fraudulent investigation by the Civil Guard should distract them from their objective, which is now to save lives,” he added. The ERC leader has also denied that there was any parallel health crisis committee, which is another of the researchers’ conjectures.

The summary of the investigation known last week against several pro-independence businessmen such as David Madí and Xavier Vendrell includes indications about how they would have used their relationships with members of the Government to try to favor their private interests. In addition, in the follow-ups carried out by the Civil Guard, it discovered that last month Vendrell ate with the Minister of Health, Alba Vergés, to, as he himself said, “make some reflections” on a public contest. The councilor this Wednesday has declared “very calm in this regard”, because as he said, all hiring were regular.

Aragonès and Vergés have thus gone into the past to the requests for explanations that the opposition has made them unanimously in the control session on Wednesday. For the leader of Miquel Iceta, the information about a crisis committee parallel to the official one is “very worrying”, for which he has required that as much information as possible be offered. “Have you ordered the departments of Health and Social Affairs to prepare a report to reassure public opinion about a possible diversion of public funds,” the first socialist secretary has claimed.

“You could at least have apologized,” the head of the opposition and Citizen leader, Carlos Carrizosa, has reproached him, “because when there is wiretapping in an investigation, it is the voices of people who say what they want to do or what they have done”. For the leader of Cs, Aragonès and his people “cover corruption with the flag, today with the flag.” “You were the one from Spain, you steal from us, but the one who robbed us was Convergència, ERC and now Mr. Vendrell,” Carrizosa charged.

After an exchange of gestures in the rifirrafe, Aragonès has accused Carrizosa of playing the “clown” in the Parliament. “You do not have any kind of credibility to answer you. You are charging not only the presumption of innocence of citizens but you are also using conversations that have nothing to do with what is being investigated and that are put into judicial investigations with him. The only intention of doing political wrong, “said the leader of Esquerra.

“All the information that we have affirms that it has acted correctly. When it was wanted to say that there was one and we have gone to look, there are none of these procedures on which there could be irregularities. And therefore trust in public workers and complaint about the political bias of the Civil Guard, “Aragonès added.