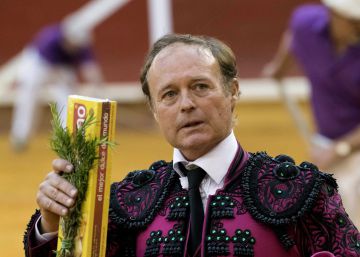 Right handed Pepe Luis Vázquez (Seville, 1957) is hospitalized in the clinic of Fatima in the Andalusian capital because of a stroke, whose first symptoms arose last Sunday, and that has kept him in the ICU of the health center until Wednesday. You are likely to be discharged this afternoon, after the last exams, but you must follow an intense rehabilitation process to recover the mobility of the right part of your body, which has become paralyzed.

The life of the bullfighter has not been in danger at any time, although the family insists that the stroke he has suffered has been of a serious concern. According to his sister, Mercedes Vázquez, the bullfighter felt unwell on a family farm near Seville, where Pepe Luis Vázquez lives alone. The next day, and with serious problems in his right arm and leg, he traveled to the capital in his car and, in the face of the persistence of discomfort, asked one of his brothers to transfer him to the health center, where he was admitted to the ICU After being examined in the emergency department.

On Wednesday it was uploaded to the plant. The analyzes indicate that it keeps cholesterol levels and blood pressure well above its normal values, and the most worrying thing is the paralysis that you suffer in the right part of your body. However, the doctors who treat him rely on the complete recovery of the bullfighter, given his strength and physical preparation, although they estimate that the rehabilitation will last months.

Pepe Luis Vázquez dressed shortly again on October 12 to participate in a charity festival organized in the Plaza de la Maestranza by the Brotherhood of the Macarena of Seville. Although he never retired from the arena permanently, he was separated from the profession, although in 2017 he reappeared in the Plaza de Illescas (Toledo) at the hands of his friend Morante de la Puebla and José Maria Manzanares, and acted at the fair of the Corpus de Granada of that same year.