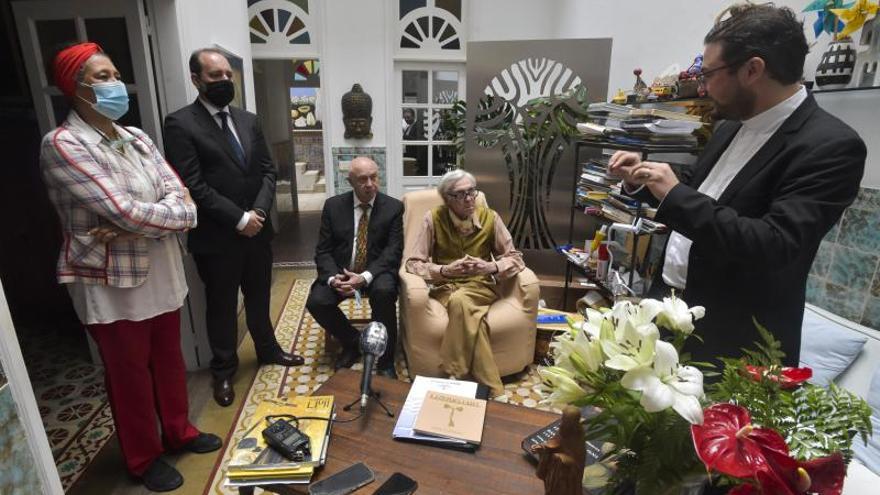 The Gran Canaria artist Pepe Dámaso has donated to the Diocese of Mallorca three series of paintings and a sculpture that he made in 2015 on the occasion of the seventh centenary of the death of Blessed Ramón Llull, which represent the best you can give: “spirituality and beauty”.

In his workshop house, located in the La Isleta neighborhood of the capital Gran Canaria, the signing of the donation of this thirty works (paintings, photography and collage, apart from sculpture) has been carried out, which Dámaso has affirmed that they have a “very special” meaning due to the admiration he feels for the figure of Llull and because he concluded it after overcoming a health problem.

This work is the fruit of “constant Damasian effort” and it served him to “come back to life”, has stated the artist, who has pointed out that Llull was interested, above all, in the “creative world” that he captured in his books, which are kept in the diocesan archive of Gran Canaria.

“They are the oldest books in the Canary Islands”, Dámaso has remarked and they constitute the legacy left by the Mallorcan missionaries who were in the islands and that this Friday the Episcopal Vicar for Heritage and Culture of Mallorca, Fancesc Vicens, had the opportunity to see: “A bibliographical gem”.

The vicar, who has signed the deed of donation in place of the bishop because he could not travel to Gran Canaria, has expressed his gratitude to Dámaso and has assured that it is “a privilege” to have these works that will expand the “cultural and cultural heritage of faith of the island “and that” believers and non-believers “will enjoy.

The intention of the Bishopric is to exhibit them temporarily in Mallorca, in the church of Santa Eulalia (12th century), which was where the exhibition “Luz de Llull” was held in 2015, and then they will already think about where to exhibit a significant selection. indicated.

For Vicens, the work donated by Dámaso is a “luxury opportunity to value beauty, which is inherent to faith” and “essential” to improve the world.

Further, In difficult times like these, due to the crisis caused by the coronavirus pandemic, kindness is valued in a special way, said the vicar.

Dámaso, who has trusted that his donation will serve as an example for other people who can also give a lot, explained that in the works he created about Llull, there is “surrealism” and a game with “letters, creation, the cosmic and Canarian spirituality and vegetation “.

Of all of them, the sculpture has stood out, as it symbolizes the story that is told about the persecution of Llull on horseback of a young woman who had breast cancer and whom he followed inside the church of Santa Eulalia.

The Mallorcan gallery owner Juan Guaita, who was the one who encouraged Pepe Dámaso to delve into Llull’s work, as well as Carmensa de la Hoz, who has been the curator of most of his exhibitions, have accompanied the Gran Canaria artist in a An emotional act that has brought back memories of his childhood in Agaete, his hometown, as he has revealed.