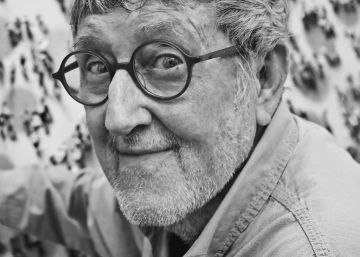 I read in the newspaper that he's dead Juan Genovés and the next day I find out as soon as I open it that he's dead Elena Aub. One sign that you are getting older is the frequency with which you read obituaries from people you have met. For many years I had an intermittent and close relationship with Elena Aub, more made of letters and then emails than personal encounters. I had admiration for Juan Genovés long before I met him. The year he turned 80, I was invited to write the text for a book about his painting, and thanks to that commission I had the opportunity to visit his home and his studio, to see him work and talk a lot with him. The painters I have met are extremely articulate when they explain their work or when they reflect on art, or on the visual world. They speak with the precision of someone who has spent a lifetime dedicated to a trade. I started to really learn about art by listening to José Guerrero in Granada, at the beginning of the eighties, and looking at the things he did with his big, rough hands, stocky in old age, the hands of a carpenter or a cabinetmaker. Juan Genovés also came from a working family, from the popular and republican enlightenment of Valencia, and that origin, sealed by the childhood memory of the war, and by the horror of what came later, marked his identity as an artist and his political conscience. .

When I met Juan Genovés, his most reproduced work, ‘El abrazo’, had been buried in the warehouses of Reina Sofía for 30 years

Once, while I was preparing that book with him, we met for lunch in a rice restaurant. I arrived a little earlier and sat down to wait for him on a bench. I saw Juan approach the restaurant, with his black jacket that had some artisan blouse, his glasses, his summary haircut, his bangs like Bertolt Brecht's, his light gait, despite the years, hardly with a point of fragility, his way of looking at things, between abstracted and alert. Spain is such a memoryless country that even those who claim to be supporters of historical memory contribute with their sectarianism to the great general amnesia. Juan Genovés, at 80 years old, was a painter who had achieved admirable personal freedom and who treasured in his biography all the pain and courage of the anti-Franco resistance; He was also a teacher who had not stopped experimenting with his work since the sixties, in tune with the best that happened in his time and also in constant revolt against the established, against the orthodoxies of the avant-garde as well as against those of tradition. . Juan Genovés had risked his life and liberty by militating in the Communist Party against the dictatorship and had created a visual world that was fully his and contemporary, and had seen an international success not achieved then by almost any other Spanish painter of his generation. But when I met him his name was rather absent from the official repertoire of Spanish art, and the original by his most reproduced work, Hug, As he said, he had been buried for 30 years in the warehouses of the Reina Sofía Museum.

Genovés was disgusted, or sad, but not bitter. He was too busy painting to waste time or the prodigious energy of his spirit, his fondness for his art, the joy so visible that his work produced him, the simple fact of being in his workshop, of getting up without laziness long before dawn. to enjoy the maximum concentration, the pure calm of the silence, the slow arrival of daylight and the rumors of the world while he worked. He said that fear had been a constant presence in his life, but that the great novelty of old age had been the disappearance of fear in front of the painting: if it went wrong, he would paint another; If the critics didn't like it, nothing happened either. He was not posing when he said these things. Old, not yet old, he radiated an affable mixture of freedom and rectitude, of peace of spirit and radicalism against the injustices of the world, against a present in which he had seen some of the most reasonable hopes of his youth fail.

I knew Elena Aub less, but I intuit that her long years of life in Spain had not erased her feeling of exile, just as she had not lost a trace of the Mexican accent. Elena, a year younger than Juan Genovés, had also been born in Valencia, and had been a child of the Republic and the war, but she was one of those who left. Juan Genovés painted with a simultaneous desire for free expression and political resistance. Elena Aub vindicated her father's literary work, Max aubAnd in doing so, he was also defending the republican and exiled culture to which his father had belonged, the other Spain that, despite the return of liberties, did not seem to find a true place in the present, to integrate itself into a living, aesthetic and civil memory. .

It was not fear, nor the presumed endurance of Francoism, that failed this generous reconstitution of Spanish culture. It was the reluctance, the daze, the fascination with fashion, which is even more powerful in literature and in the arts than in clothing. Elena Aub found herself many times very alone in the task of preserving her father's legacy, very neglected by the institutions that should have helped her the most. Juan Genovés has died without having the great exposure he deserved, and in 2017 Max Aub, a seemingly progressive City Council, wanted to strip him of one of the few official recognitions he ever had in Spain, his name in a small theater in the Slaughterhouse.

I like having met Juan and Elena, preserving their memory, passing it on to other younger people, just as they transmitted their memories of people they had known to me. José Guerrero bequeathed to me the memory of having seen García Lorca in Granada, and Jackson Pollock and Willem de Kooning in New York. I asked Juan Genovés to tell me in detail one of his most beloved personal memories: one afternoon in New York, when he was very young, at his first exhibition in the city, when the gallery was about to close, he saw enter a shy man who looked very closely at the pictures and who was Mark Rothko.