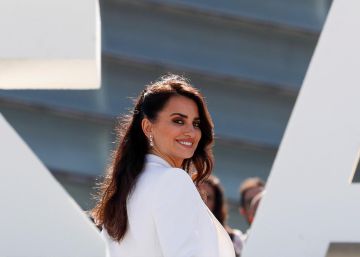 It is the youngest Donostia prize in history. But Penelope Cruz It is irrefutable. For curriculum, for awards, for artistic results and even for his public appearances: either for social reasons or, as today in San Sebastián, for an award: the actress was in a pure white, showing off and taking pride in her 45 years.

Cruz began his meeting with the press reflecting on the cinema: "He has taught me a lot about myself. I have grown up in the cinema. I started working with 14 years, and I filmed Ham Ham with 18. In the cinema I have learned about human behavior, something that fascinates me because the human being and his motivations have no background. That fascinates me in the interpretation. I played as a child a lot alone to interpret, which forced me to explore within myself. The ego has no place in the preparation of a character. "And he deepened:" You grow because it makes you have empathy and understanding for all your characters, and that with some of them would not take me a priori a coffee in real life. "

How is the life in Spain today of an actress of her size? "I spend a lot more time now here than there. Years ago it happened the other way around. Today I am a mother and I look a lot where I roll, and I fit the schedules. I still occasionally go around the street of my childhood, and it impresses." When Rebordinos called to announce the award of the Donostia prize, he asked if it was time, for his youth. "As I am a little Almodóvar character I thought something bad would happen later. I have already done the job of accepting the prize"; He finished laughing. "Remembering my trip to Hollywood, my story was never to take a suitcase and a return ticket. That would have scared me more. That is why I was calmer that first time to shoot with Stephen Frears. For the first five years, It happened like that. I never wanted to give up on filming here or in the rest of Europe, in France or Italy. "

A journalist asked him about three creators who have helped him boost his career: "Pedro (Almodóvar) has read his mind almost from the first day I met him. Bigas Luna missed him a lot, especially on days like today He gave Javier and me the first opportunity, we couldn't say goodbye to him, because he kept his illness a secret, a decision that I respect, and Fernando Trueba is also a very important filmmaker in my life. Belle Epoque arrived just after Ham Ham".

In the future of the Oscar winner for Vicky Cristina Barcelona, the address has always been. "The first time I verbalized that I wanted to direct it was Pedro Almodóvar. I told him at the Gloria bar. He told me to do it at that time, when I was young. Today I am 45 years old and I still think about it. I have not had time. for that, a good sign, right? "

At the actress's house there were no similar artistic references. "When I said that I wanted to be an actress, it sounded the same to me as if I had said that I wanted to be an astronaut. I am grateful that no one laughs at me, your support," he said with some emotion. "In the cinema I have found friends like Goya Toledo, Salma Hayek and now Edgar Ramírez. To say a few. You create such intense links in the shootings that when the end of Ham Ham, The first, I sank. I thought that maybe I would never repeat, and Bigas Luna snapped at me: 'Quiet'. Thank God, that's how it has been, "he said about his travel companions. He then explained:" We are here to serve a story and a character. I have never been attracted to repeat roles or to incarnate someone similar to me. In the distancing of yourself is when you fly. "

Within his family he lived the "work" values. And he stressed: "It's what I saw in my house. I started working young and at the same time it came from a lot of classical ballet, which gave me an almost military attitude at work. Now that I live from it, my way of thanking life is to dump in each shoot, try to do my best. Then things go well or badly. "

The Madrid has attended the press – he has only participated in the press conference and then attended some TVs – in a room full to overflowing. His presence at the festival is also motivated by the presentation of The wasp network, where he plays Olga Salanueva, wife of one of the spies who were part of the Cuban spy plot that in the 1990s infiltrated the anti-Castro associations of Miami. These groups planned – and executed – terrorist attacks in Havana. Directed by Olivier Assayas, in the cast they are in addition to Cruz, Gael Garcia Bernal, Edgar Ramírez (husband of Cruz's character), Leonardo Sbaraglia, Wagner Moura and Ana de Armas. The film already participated in the last edition of the Venice festival. "It has been the most difficult accent of my career"; He confessed to the press.

Cruz, who in his curriculum hosts the Oscar, two other nominations for the Hollywood statuette, the Caesar of Honor, three goyas, a Bafta and the award for best female performance in Cannes – shared with her co-stars in Return-I knowhas become the second Spanish to receive the Donostia, after Carmen Maura, since it began to be delivered in 1986. And the fifth Spanish interpreter, after Fernando Fernán Gómez (1999), Paco Rabal (2001), Antonio Banderas (2008) and Carmen Maura (2013). Madrid has participated in San Sebastián three times in the Official Competition Section of the festival with Everything is a lie (1994); Volavérunt (1999), and the Italian To be born again (2012). In 2017 Cruz visited the contest to present Loving Pablo (2017), together with Javier Bardem and the director Fernando León de Aranoa, in a massive projection – more than 3,000 people – in the Velodrome of Anoeta.