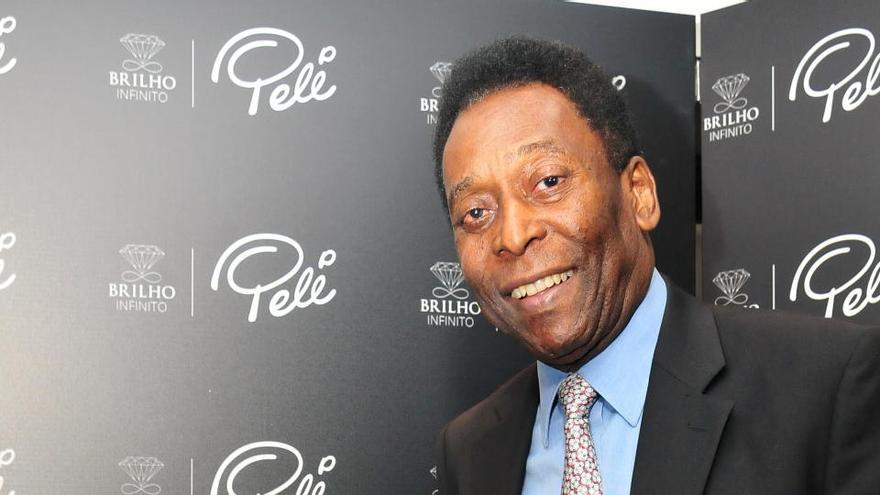 Edson Arantes do Nascimento ‘Pelé’, The king turned 80 this Friday. He did it “lucid”, despite his health problems, and sure of having “made a little mistake” in a life marked by records that placed him at the top of the football Olympus.

If the Brazilian star is absolutely certain of something, it is that God was “very good” to him in his eight decades of life, in which he won three World Cups, more than 1,000 goals and the title of the best player of the 20th century.

Not only did he internationalize football, but he also made it possible for the world to achieve place Brazil on the map.

“With Santos we dignified and made the name of Brazil known to the world. Until that time in many parts of the world they asked us if the capital of Brazil was Buenos Aires “, said the former soccer player on one occasion, who remains confined to his home in Guarujá, on the coast of Sao Paulo.

Pelé was born in October 1940 in Three Hearts, a small town in Minas Gerais, where for years he kicked a fabric ball barefoot before moving with his family to Baurú, in Sao Paulo.

Before becoming a myth, Pelé was “Dico”, a boy who polished shoes on the street to help his father, the true “architect” of the legend who dazzled the world with some unprecedented dribbles.

Pele used to say that his father could not contain the tears during the ‘Maracanazo’, as is remembered for the “tragic” final of the 1950 World Cup in which Brazil lost 2-1 to Uruguay, and, while still a child, made him the oath of his life: “Don’t cry daddy, I’m going to win a World Cup for you “.

Just ten years later, in 1958, at the age of 17, he fulfilled his promise. The eternal ’10’ was a key piece in the final of the World Cup in Sweden, in which Brazil won by 2-5, with two goals from teenager Edson.

Brazil crowned their new king, a master in the art of scoring goals and a born dribbler who showed the world that soccer was also a thing for the poor and black.

With the national team, after the glory in 1958, Pelé played the World Cup in Chile’62, but he celebrated the title off the court due to injury. England’66 was a tournament to forget, again injured by the tough tackles of the rivals and with Brazil eliminated, but the striker returned with more strength in Mexico’70, when many did not believe that at thirty he would be the great bastion of that World Cup. No other player ever won more World Cups than him.

He dedicated practically his entire career to the Brazilian Santos, a team in which he played for almost two decades and won six of the eight League titles and two of the three Libertadores Cups that the São Paulo club has in its showcases, in addition to the only two Club World Cups. Of the entity.

The living legend of Santos left the club in 1974 and went to the American Cosmos, where he played until his final retirement, in 1977, in the first big step to professionalize ‘soccer’ in North America.

After hanging up his boots, Pelé, who was married three times, the last in 2016, and has seven recognized children, was a UN ambassador and minister of sports of the former President Fernando Henrique Cardoso (1995-1998).

He tried his singing facet, made his first steps in the world of cinema and profited from advertising, a business that has led him to tiptoe over some controversial issues such as racism.

Best Athlete of the 20th Century

His unmistakable talent was discovered at the age of eleven by the footballer Waldemar de Brito, who in 1956 took him to the modest Baurú and He presented him as the “boy who will be the best soccer player in the world.”

De Brito was not wrong. Decades later, the FIFA crowned him the best footballer of the 10th centuryX, a distinction that he shares with Argentine Diego Maradona.

Their recognition went beyond the borders of Brazil and they say that in 1969, during a civil conflict in Nigeria, rival forces declared a truce so that Pelé and his team, Santos, could perform in the African country, although the version has been questioned by some researchers.

That same year, Pelé was the great protagonist in his country. Several Brazilian cities wanted to celebrate the player’s thousandth goal without caring the fans that it was scored against their own team, even reaching booing goalkeepers and home defenders who avoided the historic touchdown.

But it was at the mythical Maracanã stadium, in a match against Vasco da Gama, when Pelé got that personal brand and dedicated it to children.

Around that time a new anecdote emerged in its history. When Santos was touring Colombia, local referee Guillermo ‘Chato’ Velásquez sent him off to the disappointment of the public at the El Campín stadium. The judge was pressured to withdraw and Pelé returned to the field of play.

Pelé’s health is weakened, which has kept him confined in his home with his closest family and friends and away from the media spotlight.

He has been admitted to the hospital several times in recent times and his mobility is reduced due to his hip problems, which they have forced him to use a wheelchair.

It was precisely this lack of mobility that, according to his son, caused him a depression earlier this year. Pele, however, took the issue away and assured that it was “good”.

He ratified it just a few days ago, at the gates of his 80 years, when he sent a video to thank God for everything achieved in life,

“I have to thank God for the health of getting here, at this age, and lucid, not very smart, but lucid “, joked the eternal Brazilian king.