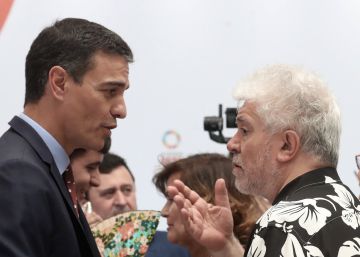 The President of the Government, Pedro Sanchez, has received this Wednesday at the Moncloa Palace a large group of LGTB activists and leaders of the world of culture on the occasion of the Pride, which has been directed to transfer that the Government "will stand firm" and will not allow "or a step back" in the defense of their rights. The LGTB collective did not step on the Moncloa since 2005, when they were received by the then Vice President of the Government, María Teresa Fernández de la Vega, after the approval of the homosexual marriage. At that time, Pedro Zerolo led the delegation of activists who, this Wednesday, has returned to the seat of the Executive without him, but with many of the references that accompanied him.

Boti Garcia, Federico Armenteros, Carla Antonelli, Jordi Petit and many other names of the group that these days celebrates its big week, that of the Pride, were those summoned by Sánchez. There were also other LGBT personalities visible, such as Pedro Almodóvar, Los Javis, the designer Palomo Spain, the actor Pepón Nieto or the first secretary of the PSC, Miguel Iceta.

The first to speak was the Minister of the Interior, Fernando Grande-Marlaska, who read the institutional declaration approved last Friday by the Council of Ministers. coinciding with the 50th anniversary of the Stonewall Inn revolts of New York, considered as the beginning of the LGBT and Pride movement.

Then came the turn of the historic activist Boti García, who for years was president of the State Federation of Lesbians, Gays, Transsexuals and Bisexuals (Felgtb), which is still linked. "We have been burned in the bonfires, locked in hospitals, ridiculed before the public, we are to celebrate our survival," he declared before the President of the Government and three of his ministers: Grande-Marlaska, Vice President Carmen Calvo and María Luisa Carcedo ( Health).

Pedro Sánchez has narrated the story of Antonio Ruiz, a homosexual man who was imprisoned in 1976 for three months on the basis of the Law of Danger and Social Rehabilitation, considering him a pervert. "This did not happen in 1950 or 1960, it was 1976, dictator Franco had died, they are not remote persecutions, in historical terms we are talking little
less than yesterday, "said the president.

The head of the Government added that today "the whole of society no longer understands discrimination based on sexual orientation" and has ensured that Spain is "a LGTB reference". In addition, he thanked the collectives for their work. "You are a strong, solid, very active and with mobilizing capacity and claiming capacity."

He has also promised that "the government will stand firm" against aggressions or threats against people because of their sexual orientation or gender identity, and that "never again" will question "the right to be" happy of a person because "to prohibit love because it is different becomes a colossal nonsense".

Jordi Petit, a prominent Catalan activist, has focused his speech on the countries that are still pursuing homosexuality, while criticizing the lobbies "ecclesiastics" who, in their opinion, try to interfere in government actions to limit the rights of the LGBT collective. "I invite all progressive countries to fight this conservative wave," he concluded.