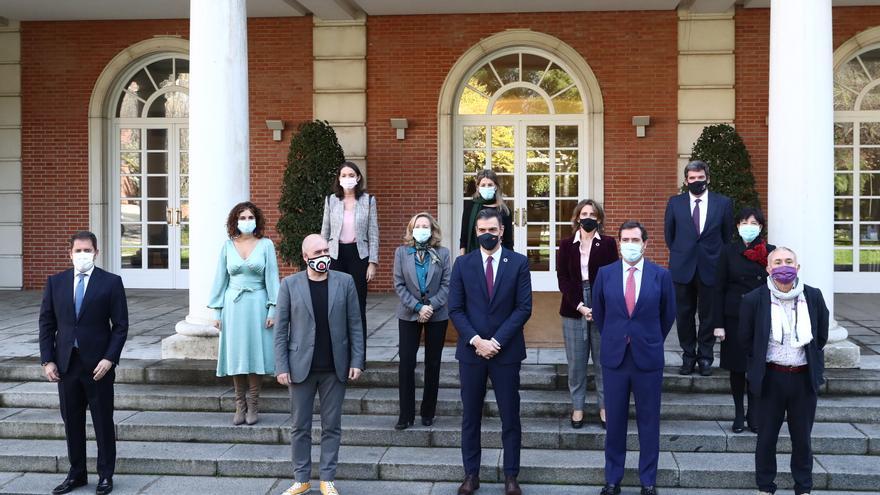 The President of the Government has once again framed in a large photograph the alliance between the Executive and social agents to seek solutions in dialogue to the economic consequences of the pandemic. On this occasion, to jointly address the projects and plans for recovery with the European funds that Spain will receive. Pedro Sánchez received this Monday the leaders of the businessmen and the majority unions in Moncloa, in a meeting in which a good part of their ministers were present and which made visible the launch of the “Social Dialogue Table for the Recovery, Transformation and Resilience of the Spanish Economy ”, with the main challenge of negotiating how to channel the 140,000 million European funds that Spain will receive for the exit from the crisis due to the pandemic.

“Through this Table the Government undertakes to keep the social agents informed about the Recovery Plan that is being prepared and negotiated with the European Commission and that will be financed with the Recovery Fund-Next Generation “, have highlighted from Moncloa in a statement on the act attended by the presidents of the CEOE and Cepyme employers, Antonio Garamendi and Gerardo Cuerva, and the general secretaries of the CCOO, Unai Sordo, and UGT unions, Pepe Álvarez. Pedro Sánchez has surrounded himself with the vice-presidents Nadia Calviño and Teresa Ribera, as well as a large number of ministers: Finance, María Jesús Montero ; of Transport, Mobility and Urban Agenda, José Luis Ábalos; of Education and Professional Training, Isabel Celaá; of Labor and Social Economy, Yolanda Diaz; of Industry, Commerce and Tourism, Reyes Maroto; and of Inclusion, Social Security and Migrations, José Luis Escrivá.

The Government has explained that the table will have continuity over time and “will serve to keep social agents regularly informed about the execution and monitoring of the Plan over the coming years.” The economic vice president Nadia Calviño has been in charge of informing from the Government about the opening of this new dialogue table, at the end of the meeting, in which the Executive has announced to the social agents that it also finalizes a royal decree-law with measures to “eliminate bottlenecks, reduce unnecessary procedures, controls and reports and shorten administrative deadlines,” Moncloa reported, as the CEOE employer had claimed.

In addition, the Executive has announced that it is finalizing “the creation of a new figure, that of Strategic Projects for Economic Recovery and Transformation, to include new instruments of public-private collaboration in the legal system.” Under this figure will be included “projects of a strategic nature, with a significant potential for dragging the rest of the economy and that require collaboration between administrations, companies and research centers to ensure that operations in our country scale up”, highlights Moncloa .

The start of the dialogue table this Monday comes after several agreements between the coalition government, employers and unions, forged especially in the Ministry of Labor and Social Security led by Yolanda Díaz and José Luis Escrivá, respectively, as the extensions of the ERTE. Social dialogue “has allowed to date the signing of six agreements in defense of employment, social measures, ERTE or telework,” they underline in Moncloa.

President Pedro Sánchez himself has raised these pacts with various acts, and he forged his own from Moncloa in July, which have valued the Executive’s dialogue with representatives of businessmen and unions in a context in which unity and alliances are being very complicated in the political arena. The summer one, had more of a message to Brussels than of content or concrete measures, in full negotiation of European funds for recovery. Now, the Executive faces the task of planning the channeling and destination of these resources that seek to recover from the economic crisis derived from the pandemic, with an eye on the next six years and a way out towards a more digitized and sustainable economy with the environment.

The Government avoids ruling on the labor reform

Highlighting these agreements and the Government’s “spirit” of dialogue has been one of the maxims of the economic vice president, Nadia Calviño, in the press conference that she gave after the meeting. The union leaders have explained in their appearances before the media that have reminded the Executive of their commitment to dismantle the labor reform of the PP, whose modification “is not conditioned” to the receipt of European funds for the recovery, Unai Sordo insisted. and Pepe Álvarez.

To questions on this subject, Calviño has avoided referring specifically to the labor reform, although he has affirmed that the debates are not being raised “in terms of conditionality and less with respect to past reforms. The economic vice president, who has already shown her reluctance several times to this promised dismantling of Rajoy’s labor reform, has argued that the Government’s objective is to look “to the future”, “how to walk together” with the social agents towards the modernization of the working market.

Business leaders have confirmed that the modification of the so-called “most damaging” aspects of Rajoy’s labor legislation, which the employers do not consider to be the time to review, has not been addressed in the meeting, but in any case they have insisted on their Willingness to speak “always” about everything, “as we have done for 40 years”. Antonio Garamendi and Gerardo Cuerva have insisted on the need to approve a shock plan for the sectors most affected by the pandemic, such as the hospitality industry, in which the Ministry of Industry is already working, as confirmed by Calviño.

The Council of Ministers this Tuesday will approve several economic measures, such as the expansion of ICO credits, added the vice president, who did not want to advance details in this regard.