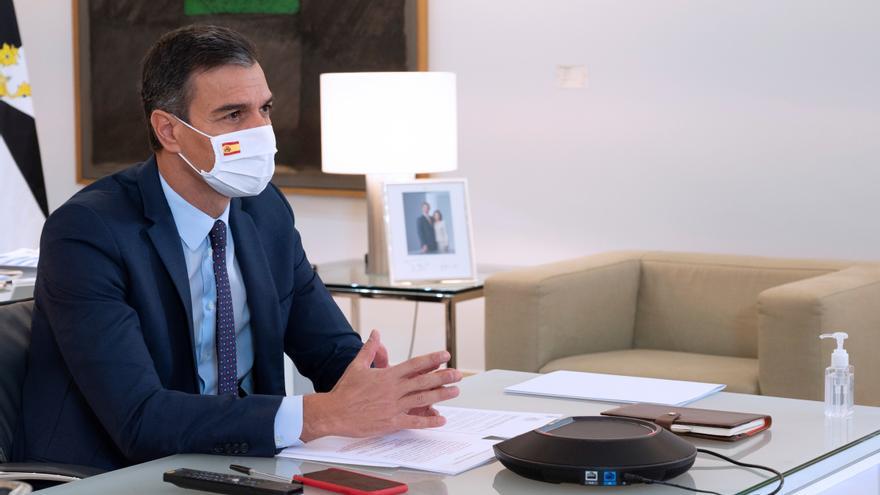 Pedro Sánchez assures that the Government and the PP negotiated the renewal of the General Council of the Judicial Power (CGPJ) this summer and that agreements were reached “practically 99%” in the conversations that took place this August, mainly led by the Minister of Justice , Juan Carlos Campo, and the person in charge of the area in the Popular Party, Enrique López. However, the president lamented that “inexplicably the PP broke those agreements.” This has been pronounced in an interview in La hora de La 1 (TVE) about the failed attempt to change the governing body of the judges, which has been in office for almost two years.

The president has confirmed that there were contacts that “bore fruit” until practically having an understanding. The start of the negotiation came as a result of a WhatsApp message between Sánchez and Pablo Casado in which the opposition leader expressed his willingness to renew the CGPJ, as published The country. Although Sánchez has not wanted to go into that detail, he has assured that the talks took place during the month of August. On the reasons that led Casado to break up the talks, the president has assured that it is the PP that has to give explanations.

Casado closed the door to any type of understanding with the Government for the distribution of the CGPJ while Unidos Podemos is in the Council of Ministers and linked this rejection, fundamentally, to the position that those of Pablo Iglesias maintained regarding the departure from Spain of the emeritus king Juan Carlos I as well as his defense of a change in the state model in favor of the republic. “We cannot accept that Podemos is going to be an interlocutor in this renewal of constitutional bodies,” settled the leader of the PP.

To change the governing body of the judges, the participation of the two major parties is essential, since the Constitution establishes that at least eight of the twenty members that comprise it must be elected by a three-fifths majority in the Cortes. The other twelve are regulated in the organic law of the Judiciary, which at this time also states that they must be appointed in Congress and the Senate by that reinforced majority.

However, Sánchez has asked the rest of the parties to seek “alternative” majorities to the rest of the institutions that remain to be renewed and that they do not require this broad consensus: “I have urged all groups to, since the PP is installed in the blockade, to articulate parliamentary majorities that allow the unblocking of institutions.” This option could be valid, for example, to complete the contest for the election of the board of directors of RTVE.

Asked about Operation Kitchen, which splashes the Government of Mariano Rajoy squarely by the messages exchanged between the then Minister of the Interior, Jorge Fernández Díaz, and his number two about the espionage of Luis Bárcenas, Sánchez has limited himself to saying that “it belongs to a dark time in our country. “Let’s hope that justice sheds light on this case that is very worrying,” he has settled.

Regarding the main negotiation that the Government has to face right now, that of the General State Budgets for 2021, Sánchez has ensured that it is not proposed that the public accounts fail, as happened in 2018, causing an electoral advance. “I do not put myself in this situation. It is unimaginable that budgets, which are the main weapon, the instrument, to recover economically in our country do not find the support of a majority in Congress,” said the president, who trusts that get ahead not only because “they are urgent but also because they came out with the greatest possible support.”

He will contact Torra to meet the dialogue table

Despite the fact that the socialist part of the Government entrusts the approval of the accounts to Citizens, Sánchez has winked at the pro-independence formations, such as recalling the commitment to reform the Penal Code for the reduction of the penalties for the crime of sedition -which would lead to an acceleration in the release from prison of the leaders of the you process-. “It is an objective that I announced in my inauguration speech,” said the president, who has acknowledged that “there is still no date for this modification in which the Ministry of Justice is working:” My commitment is to address this update. He has also assured that this week he will contact Quim Torra to try to close a date for a meeting of the dialogue table between the Government and the Generalitat, which is one of the ERC’s demands to sit down to negotiate.

In addition, Sánchez has confirmed that the Government will negotiate with the four JxCat deputies who have not left with Carles Puigdemont “if this split occurs, if the PdCAT parliamentary group breaks up. Initially, the PDeCAT leadership did not consider a change of strategy in Madrid or vote differently from what his four colleagues who have gone to Junts can do, but after the crisis of the Government in which Quim Torra dismissed the only councilor of the PdCAT, the management announced that it would summon its deputies both in the Catalan Parliament as well as in the Congress and Senate, to define “their role in the next course”.

Sánchez has assured that the programmatic agreement sealed by PSOE and United We can “bind” and “compromise” the budget negotiation, but has admitted that they have to “mold our political and economic objectives, such as a fiscal reform, to the economic situation.”

What the president has made clear is that he trusts the durability of the coalition and has ruled out a government crisis: “I am comfortable with the coalition government, I have full confidence in each and every one of the members of the coalition government.” . In that sense, has justified that this part of the Executive was not informed of the possible merger of Bankia and Caixabank and it has shielded itself in the necessary “confidentiality”. Thus he has ensured that only the economic ministers had the information. In any case, and contrary to the opinion expressed by United We Can, Sánchez has assured that “the operation has very positive aspects.”

Although he has avoided saying whether the State will recover the nearly 20,000 million from the Bankia bailout, the president has defended that the objective is to “maximize” the State’s presence in the financial entity’s shareholders. Likewise, he has been in favor of a public bank, although for him the closest thing is the Official Credit Institute (ICO), which has recalled that it injected 100,000 million liquidity to SMEs during the confinement and has launched a line of 40,000 million for economic reactivation.

As for other measures implemented during the pandemic, such as the ERTEs, he stated that it has been “a successful experience”, but explained that the intention now is to prolong them and prolong them “to the extent of the impact of a pandemic”: “We are willing to extend the ERTE, but we want to continue to encourage the reactivation of these jobs “. On the possibility of approving a paid leave for parents who have to take care of quarantined children due to contact with a positive, the president has left it in the hands of social dialogue.