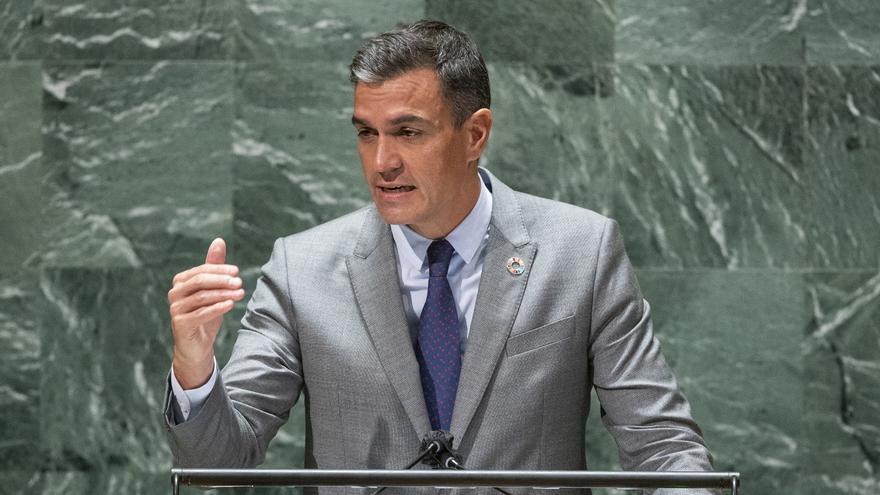 The President of the Spanish Government, Pedro Sánchez, warned this Wednesday before the UN General Assembly that democracy in the world “without a doubt” is “threatened”, and before this he asked the international community to protect it and confront extremism and those who call to hate.

Sánchez launched this warning in his speech at the opening of the 76th session of that United Nations body – with whose Secretary General, Antònio Guterres, he met shortly before – and before which he made two commitments that he had already advanced.

Specifically, that Spain will increase its donation of vaccines to the COVAX mechanism by 7.5 million doses in the first quarter of 2022 (to add a total of 30 million) and that it will contribute 30 million euros to the adaptation fund to face to climate change.

His concern about the situation of democracy in the world came from the hand of an analysis of the situation in Afghanistan, before which he said that the evacuated population is a victim “of the terror associated with fanaticism and extremism and of the lack of a state strong that nurtures a free society. ”

Faced with this, he called on the international community to defend solid states with resources that guarantee the well-being of citizens according to values ​​of justice, progress and equality, and also defend democracy “as the only alternative to any totalitarian, exclusive and intolerant”.

After lamenting the special difficulties for women and girls in that country, he recalled that the Afghan crisis has led some to question the way in which certain countries participate in the international arena.

“Against these voices, I want to declare here today that the democratic model is the only one that guarantees the defense and protection of human rights and individual freedoms, and that it will continue to be the beacon and guide for our actions,” he proclaimed.

In his opinion, the fight for democracy is not only in Afghanistan, but it affects the five continents and is also fought in the most developed countries of the world.

“It is a daily fight against those who want to impose inequality benefiting a few, who seek to exclude or blame the most vulnerable minorities, who call for hatred for reasons of origin, sex or belief, who appeal to walls and borders to prevent progress of the ideas of equality, freedom and fraternity, “said Sánchez.

To the 22.5 million vaccines against the coronavirus that Spain had stated that it would donate to the COVAX mechanism, it will add another 7.5 million in the first quarter of 2022, thus reaching 30 million. Of the initial 22.5 million, 7.5 were going to be for Latin America and the Caribbean, but he reported that this figure will eventually double and a total of 15 will go to that region. The rest, another 7.5 million doses will be destined for the countries of sub-Saharan Africa and the southern neighborhood of the European Union.

Sánchez stressed that Spain was the first country in the European Union to immunize 100% of the population over 80 years of age and of the countries that are donating the most vaccines (the seventh in the world and the third in Europe). Something that, he said, shows the solidarity of Spanish society with third nations. In this same context, he advanced that Spain is going to contribute an additional two million euros to the “Accelerator ACT” initiative, launched by the World Health Organization.

His second announcement before the UN Assembly and a month after the COP26 summit in Glasgow in which commitments on climate finance have to be set, is that Spain will contribute 30 million euros in 2022 to the so-called adaptation fund. Sánchez assured that Spain will work to make that Glasgow summit a success and stressed that “the time to act is now.”

“We cannot wait,” said the President of the Government, before emphasizing that the transformation that the world needs must be fair and, therefore, we must respond to the climate emergency with an integration perspective. Sánchez took advantage of his stay in New York to hold a meeting with the Secretary General of NATO, Jens Stoltenberg, in which they discussed the preparations for the summit that the Alliance will hold in Madrid in 2022.

In that meeting, both also addressed the crisis between the United States and France on account of a defense agreement of the Biden administration with Australia and the United Kingdom that has frustrated a Paris contract with Canberra for the sale of submarines. Sánchez transferred to Stoltenberg his full willingness to collaborate in whatever is necessary to restore trust between those he described as “two historical allies.” At the same time, he expressed his solidarity with French President Emmanuel Macron, for the loss of the submarine sales contract.

He has not intended to hold any meeting on this visit with any member of the United States government and stressed that this is a trip to the United Nations in which he had planned another series of activities, many of them of an economic nature, which were ultimately not possible. for cutting his schedule and which he hopes to be able to resume soon.

“No one will be left homeless on La Palma”

The President of the Spanish Government, Pedro Sánchez, also guaranteed before the UN that “no one will be left homeless” on La Palma after the volcanic eruption that is affecting this Canary Island.

As Sánchez had advanced, he began his speech before the United Nations General Assembly referring to the situation La Palma is experiencing and which forced him to postpone his trip to New York and reduce his agenda in this city. “Our government is devoted to its inhabitants, who see how the lava takes away homes, agricultural lands, farms, fertile lands and an enormous emotional memory whose value no one can measure,” he added.