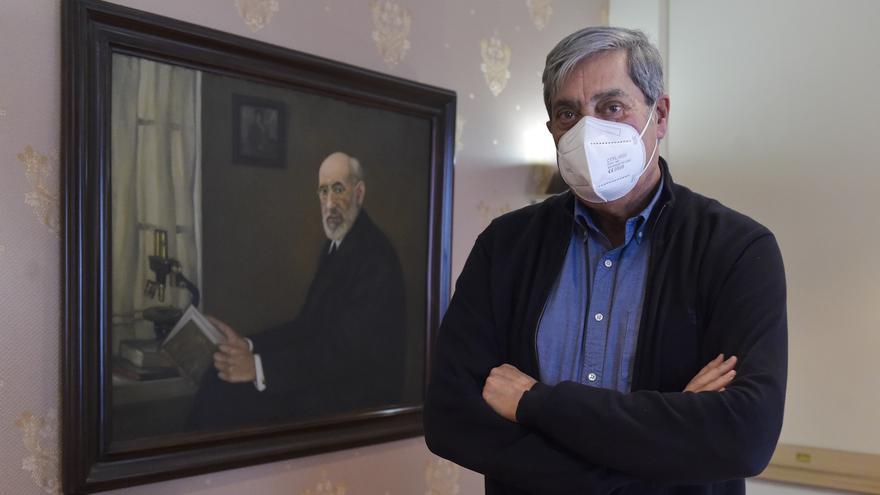 Dr. Pedro Cabrera, leader of the plate called Doctors for Science, was imposed yesterday with un 51.5% of the votes to Luis Miguel Pérez, representative of Doctors for Change, for which he will renew his presidency in the body for the next four years, which will be the last of his mandate. Of the 6,004 members called to the polls, only 24.9% participated, which represents a total of 1,494 physicians. Taking into account the data disaggregated by Islands, in Gran Canaria 1,235 professionals voted; in Lanzarote 159; and in Fuerteventura 100. The polls were open from 10 a.m. to 6 p.m., although it is true that those members who were on duty this Friday, or outside the province, had the opportunity to vote through the notaries assigned to each island between March 17 and 18. Participation in this way was estimated at 278 people, in the case of Gran Canaria; eight in Fuerteventura; and 18 in Lanzarote.

Precisely, the delay in the scrutiny of these ballots implied that the result was known after 1.20 hours. In Gran Canaria the event took place in the Alfredo Kraus Auditorium, which in view of the long delay and for reasons associated with the curfew, had no choice but to close its doors, so the count was transferred to the collegiate headquarters, where the count continued from 22.21 hours.

It should be remembered that this process led to the resumption of the elections called in April 2018 in the College and that they were contested by the group of Dr. Pérez, who presented a judicial appeal on May 15 of that same year, after the Electoral Board reject his candidacy for appreciating notable differences between two of the rubrics of one of the physicians that at that time was part of his list, those of José María Morán from Lanzarote, who also guaranteed that those signatures were his own. However, this conflict led the Electoral Board to proclaim the sole candidacy of Pedro Cabrera, who renewed the presidency of the body, a position he has assumed since 2006.

Finally, last November, the Contentious-Administrative Court number 6 of the capital of Gran Canaria declared the process of these elections invalid and the Board of Directors chose not to appeal. On February 22, Doctors for Change presented the documentation required by the Electoral Board and, on March 4, their participation in the process was admitted.

The morning began with the staggered arrival of dozens of doctors who, strictly complying with the security measures against Covid-19, were casting their votes in the main hall of the Auditorium. One of them was Dr. Eduardo Rosario, a Primary Care specialist at the Schamann Health Center, who did not hesitate to show his satisfaction with the holding of the elections. “It seems to me a very fair decision and what has to prevail now is democracy,” he stressed.

In the doctor’s opinion, the institution “is crying out for a change”, especially at the communicative level, which is where he observes the most deficiencies. “I have been a member for 11 years and I hardly know anything that happens inside. I am one more member and I only remember the College of Physicians when they charge me the fee every three months. I don’t even know if they send emails, and the Board of Directors has not held meetings with us to inform us of the problems, “lamented the specialist, who also highlighted the need to reinforce the support offered to Primary Care professionals.

Another voter was a surgeon from the Gran Canaria Island University Hospital, who preferred to remain anonymous, but wanted to point out the changes required by the collegiate body. “We must modernize the statutes, adapt them to the times and circumstances. For example, an online voting system could be established, ”he suggested.

A few meters away was a pediatrician who also expressed the desire not to reveal his identity. In his case, he has already put an end to his professional stage in public health, but he continues to exercise his functions in private. “Collegiate members need more attention to be paid to us, especially retirees. In addition, I believe that it is necessary to create a structure so that the College gives greater coverage to doctors who are sick, ”defended the doctor, moments after depositing the envelope in the ballot box.

However, he valued as “very positive”, the management of Pedro Cabrera during his extensive career. “From my point of view, your group has worked very well. In fact, he decided to vaccinate the doctors at the College against the coronavirus and that is a very important action, “he stressed.

Immediately afterwards, the specialist in Family and Community Medicine María Amor Guerra left the room, who was delighted with the holding of the elections and took the opportunity to highlight the need for more resources in Primary Care. “It is necessary to revalue the role of Primary Care. We are the ones on the front lines of the battle and we have to have more support, more personnel and more means to be able to move forward ”, the doctor argued firmly.

In addition to the problems already described, from early in the afternoon, several health workers alerted to the exchange of messages by Pedro Cabrera, who called the opposition plate “unscientific” and accused it of belittling women. After being questioned by this newspaper about this matter, the pulmonologist chose not to comment on it.