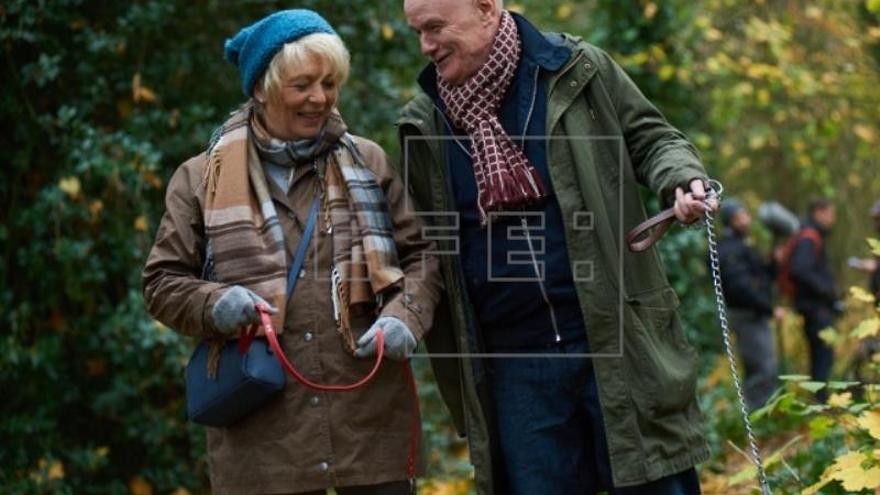 Madrid, Jan 13 (EFE) .- British film director and psychotherapist now retired, Paul Morrison (London, 1944) argues that the need to establish new relationships of love and intimacy does not disappear over the years, a topic that he addresses in his last film, “23 walks”, which will hit theaters next Friday.

“At a certain age you have more luggage on you, more history, and that sometimes catches you but it also gives you wisdom, I wanted to show both things because both happen in real life,” the filmmaker, nominated for an Oscar for best film, told EFE foreign by “Solomon & Gaenor” (1999).

Starring Dave Johns (“Me, Daniel Blake”) and Alison Steadman (“Pride and Prejudice”), “23 Walks” marks his return to directing a feature film twelve years after “Limitless”, a film about friendship between Lorca, Dalí and Buñuel in the Madrid of the 1920s, with Robert Pattinson as the poet from Granada.

In today’s London, Dave and Fern meet as they walk their dogs through the park, and over 23 walks a romance blossoms between the two. However, neither has been entirely honest with the other and when their secrets surface in the middle of the plot they compromise their future together.

QUESTION.- It is not common to see stories of falling in love in the cinema after 60 or 70 years. Was that scarcity a motivation for making this movie?

ANSWER.- The need to be close to someone does not end at a certain age, the need for intimacy, love, connection, also sexual. But what usually happens is that the elderly are either ignored or emotionally annulled, with empty lives. I wanted to show that older people can have a rich, comfortable life, just like anyone else.

Q.- However, it is also evident that at that age love has its peculiarities.

A.- You have more baggage on you, more history, and that sometimes catches you, but it also gives you wisdom, I wanted to show both because they both happen in real life. On the other hand, there are young people who carry many stories and problems. Falling in love is not easy for anyone.

Q.- The leading couple meet while walking, an activity that we have rediscovered with covid-19 and confinement. Are you one of those who believe that the pandemic will eventually bring us some learning?

R.- From the period of confinement I remember the empty streets. From my house, which is on top of a hill, I have views of London but never before have I had such a clear view, without pollution, in silence. On the other hand, I have lost two friends to covid, so I have mixed feelings of sadness and calm.

Q.- Dogs have a great role in the film. Are you a dog lover?

A.- I’m not crazy, I like them but not all of them. The movie is dedicated to Benji, a golden retriever that I had for 16 years. Remembering my dog ​​after his death was one of the motivations for telling this story.

Q.- Several recent films, yours included, reflect the problems that English people have with housing or social security. Are things that bad in the UK?

R-. In the last 10 or 12 years the welfare state has suffered deep cuts, so when the covid arrived we were not prepared. It is something that has also happened in other European countries, the lack of capacity to serve those who need it. It seemed important to include a look at this topic.

Q.- For 25 years you have combined psychotherapy with film directing. Why?

A.- I like both disciplines and they are actually connected. Psychotherapy is discovering the story underneath, let’s say it’s about removing layers to discover the story, while cinema is built by adding layers.

Q.- You filmed a film about the friendship between Lorca, Dalí and Buñuel (“Without limits”) and in “23 walks” Spanish culture also appears. What is your relationship with Spain?

A.- As a child I spent a lot of time in Spain and a few years ago, before going to shoot “Sin Limits”, I met a person walking my dog, we started talking and I told him that I did not speak any Spanish and she offered to teach me, as it happens in the film, only that we did not fall in love, my wife would have been very upset.

Q.- Releasing in these times is really difficult. How do you see the future of cinemas?

R.- I think there are many people who love to go to the movies and are looking forward to coming back. On the other hand, it’s a good time for a movie like this, people need stories that give hope and at the same time recognize how difficult things are in life, and this movie has both.

Pope calls for courageous journalism and controls against fake news