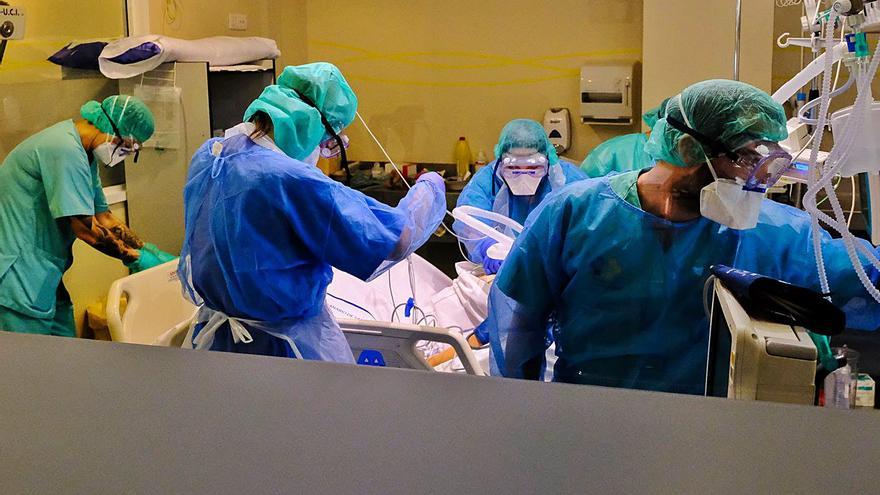 Patients hospitalized for Covid-19 are subject to a higher thrombotic risk than those requiring admission for other infections. This is supported by various studies. And is that the new coronavirus can trigger severe inflammatory processes, thus increasing the chances of suffering thrombotic phenomena. Today, precisely, the World Thrombosis Day, a date that aims to create social awareness about this pathology and the complications it causes in the state of health of those affected. “There are some infections that, due to the inflammatory state they cause, cause alterations in blood clotting. The frequency of these episodes in patients with Covid has been very striking since the first wave, as we have observed many more cases, “explains the doctor. Laura Quintana, specialist in Hematology in the Hemostasis Unit of the University Hospital of Gran Canaria Doctor Negrín.

Faced with this reality, professionals are committed to prevention by resorting to heparin. “It is an anticoagulant that can be given intravenously or subcutaneously and whose effectiveness has been demonstrated. Furthermore, it does not interfere with the drugs that patients who fight against the virus in hospitals may need ”, indicated the specialist. In fact, patients with Covid-19 previously anticoagulated with other therapeutic resources, “usually have their usual medication substituted for heparin when they are hospitalized.”

It should be noted that, at the pulmonary level, SARS-Cov-2 infection awakens a inflammatory response in the alveoliSince it is a foreign agent that drives the cells of the immune system to attack it. “In this process there is also an attack on all the surrounding structures, which causes substances that stimulate coagulation to be released and it is easier for a thrombus to occur”, details the health company. “Taking all this into account,” he continues, “it is essential to act early to avoid complications.”

Thrombosis is a condition characterized by the appearance of a clot within a blood vessel – a vein or an artery. The body has mechanisms to eradicate it, however, when it cannot do so, or the clot is formed without damage, the consequences can be very serious. “The clot occludes the blood vessel. If it is a vein, we speak of a venous thrombosis. If, on the contrary, this occurs in an artery, we would be facing an arterial thrombosis ”, emphasizes the hematologist from the Gran Canaria hospital.

According to the specialist in Hematology Laura Quintana, “these thrombi can cause a transient ischemic attack, or permanent cerebrovascular damage”

Based on the expert’s words, one of the most worrisome is deep vein thrombosis, which occurs mainly in the veins of the lower extremities, and which can lead to a pulmonary embolism. “This happens when a piece of thrombus breaks off and travels to the pulmonary arteries causing a blockage,” he says.

However, thrombosis also may be responsible for causing a stroke or cerebral infarction. “Some thrombi affect patients who suffer from arrhythmias such as atrial fibrillation – very common in the population. This disorder causes an abnormal movement in the heart to be created, which affects the blood, and which favors the appearance of clots in the organ itself. These can travel through the arteries and reach the brain, causing a stroke at that very moment ”, the physician warns. To later add that, “these thrombi can cause a transient ischemic attack, or permanent cerebrovascular damage.”

Likewise, the main “modifiable” risk factors that can trigger thrombotic episodes are smoking, alcohol and obesity. While it is true that major surgeries, hospitalizations and immobility are other circumstances that should not go unnoticed. “Thrombosis is the leading cause of preventable death in hospitalized patients. Therefore, patients should ask their doctor about their risk of thrombosis and not ignore this danger ”, emphasizes the hematologist.

Other groups subject to a greater predisposition are made up of those over 60 years of age, cancer or heart disease patients, pregnant women, women receiving oral contraceptives or other recommended hormonal treatments after menopause, and all those who have a family history.

Regarding the therapeutic arsenal that is available to manage the pathology, in addition to heparin, there are oral anticoagulants such as Sintrom – the most used commercial brand and that is part of a family of drugs called antivitamin K – and others with action direct.

“In acute situations of thrombosis, some patients must undergo a thrombectomy or thrombolysis. The first is to remove the thrombus in the blood vessel in which it occurs. The second is to administer drugs intravenously to dilute the thrombi. Both are very restricted techniques and we only have to resort to them to deal with very specific cases ”, underlines the professional from Negrín.

In the opinion of the physician, thrombosis is a pathology that requires greater visibility, as its severity is unknown to a large part of the population and, if not treated, can even lead to death. “One in four deaths in the world is related to complications of thrombosis. It is a very frequent pathology, but the lack of knowledge about it means that it is not perceived as a real problem ”, says the doctor from the Hemostasis Unit. Every October 13th World Thrombosis Day is celebrated with the purpose of making the population aware of the causes, complications and risk factors involved in its development. “We are facing a pathology that causes a lot of morbidity and mortality and that is very little visible, so it is necessary to recognize the symptoms that indicate its appearance and consult the specialists as soon as possible,” says Dr. Laura Quintana. Following this line, among the symptoms of deep vein thrombosis, the difficulty in executing movements with the leg, pain in the calf and thigh area, and inflammation stand out. In pulmonary thromboembolisms, on the other hand, palpitations, breathlessness and pain sensation in the chest area are common. “It is essential to know our body well to be able to identify these alarm signals and act early. Only in this way can more serious consequences and damage be avoided ”, adds the Negrín physician. “In the case of arterial thromboses that lead to stroke,” he adds, “difficulties in speech and movement are usually some of the most common symptoms.”