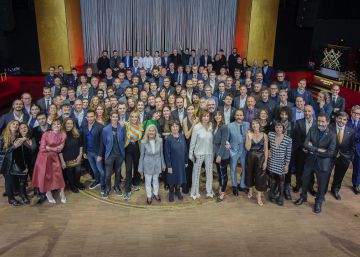 Jose Mari Goenaga, one of the three directors of The infinite trench, nominated for the Goya awards in 15 categories, said: “Each nomination is like an award. If we won an award, it would be 16 prizes. ” His colleague Aitor Arregui complemented it with grace: "And if 15, 30 fall." His phrases may well summarize the relaxed atmosphere that was breathed on Monday night during the Goya nominee party in the Florida Retiro room in Madrid. None of the option shows pressure to take the prize, although the mere possibility and what may come later are seen as a huge triumph.

On the red carpet paraded most of the 173 applicants to take a pigheaded for each of the categories of the awards, which will be delivered in Malaga on January 25. The great absentees of the night were the director Pedro Almodóvar and the actors Penelope Cruz and Antonio Banderas, of Pain and glory, second favorite with 16 nominations in the Goya, and shortlisted hours later for the Oscars next February. Yes was Asier Etxeandia, nominated for best supporting actor, who praised the project he worked on: “It's justice that Pain and glory Be so valued. It is a historical film, not only for this country, but I think it will be very important worldwide. ” In addition, he was confident that Almodóvar's film will win the majority of the nominations and, particularly, said that his biggest prize was working on the film.

Young faces and other strangers so far in the world of cinema also passed through the place. Belén Funes, with The daughter of a thief, is the only woman nominated for best new director. "And the only young girl," he jokes. “That there is only one woman nominated is surely not very good. If we start to make numbers, we see that women do not manage to finance their films so easily, ”he says before explaining that, contrary to the trend of several productions this year, his work focused on looking at the present rather than the past. “I think I don't have enough culture or knowledge to start looking at the past. I am better able to dive more into the reality of my present, ”he said. And he announced that, despite the difficulties of building a career in cinema as a woman, next year, "safe", will begin to work on a new film.

Also present was a jovial Greta Fernández, who with 24 years aspires to the award for best leading actress for her role in The daughter of a thief, film for which she was already recognized with a Silver Shell at the last San Sebastian Film Festival. Before traveling to Switzerland to present the film at the international film festival Les Arcs, the performer recognizes the talent of the other actresses competing for the prize. “If I win, I will be happy. If I don't win, I'm not going to get sad. I don't say I don't have any points, I say I think it's difficult. ” He also revealed his intention to look for projects on the big screen outside of Spain, either in other countries in Europe or in America. “I really like Spanish cinema, but it is true that sometimes it is difficult to find papers and find projects”

And Benedicta Sánchez, who at 84 enters vitally into the world of entertainment. The protagonist of What burns She is shown between surprised and satisfied by the nomination for best revelation actress, who did not expect and that is partly due to the insistence of her daughter, who led her to the audition. "I didn't think that at my 84 years I was going to be an actress of anything." And your career ends here? “What I always say: I make my way by walking. What I touch. " Although he announced that if he wins in Malaga, he will celebrate it by dancing a doll.

Salvador Simó, that with his Buñuel in the labyrinth of the turtles He won two weeks ago at the European film awards, now he hopes to repeat at the Spanish Academy, where he received four nominations. But he clarifies that, although he receives them with satisfaction and gratitude, he has very clear interests: “As long as the public likes it, the awards are good and it is a recognition that honors us a lot, but in the end everyone who does What matters to the cinema is that people like it. ”

Towards the end of the parade the director Alejandro Amenábar, from While the war lasts, the favorite for the Goya with 17 nominations. "I am very grateful and glad that our work has been recognized so massively," he said. He acknowledged that he is especially pessimistic about the awards and that, in general, he prefers not to have many illusions. “I hope we scratch some pigheaded" Although he considers that his work has already been very well recognized: "When you see people attending massively, it is the great prize for a filmmaker."

The assistants and the absent ones of this Monday will meet again in little more than a month in Malaga in the awards ceremony of some special Goya, both for the competition that is among their main favorites, as for the high level through which it passes Spanish cinema today.

Teresa Correa: «It is necessary to make women visible since prehistoric times»

The extra time of summer, essential to digest the novelties of comics