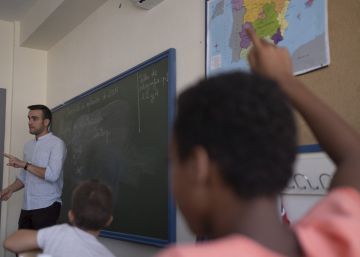 The network of public centers, where 67% of the students of non-university education of general regime study, welcomes eight out of 10 foreign students in Spain. Students from other countries, which usually require a greater effort by the school, represent 10% of the students of the public and 4.9% of the concerted, according to data from the Ministry of Education of the 2016-2017 academic year. In communities such as Madrid and Catalonia, the difference between both publicly funded networks is slightly greater. In places like Murcia, the gap is much greater: foreign students reach 14.9% in public autonomy, but only 5% in concert. In Cantabria, on the other hand, the cast is much more balanced and students from other countries represent practically the same in both networks.

Are you a member of the educational community? Participate in the Education Forum from EL PAÍS answering this week's question: Why does the concerted school have fewer foreign students than the public school? We will post here a selection of the answers.

"They are centers that choose their students"

They are centers that choose, economically and socially, their students. They charge fees covertly, thus limiting who can pay and enter. They get rich at the expense of everyone's taxes and do not serve as social integrators. All this at the cost of a better functioning of the public.

Concerted teaching is more expensive. For example, the dining room, served even by the same company, is more expensive. Uniforms and even the material served by the centers are usually more expensive. In addition, and this is the most bleeding, extracurricular activities integrated within the school schedule are expensive and generally families of immigrant schoolchildren with precarious contracts and jobs for years in black and over-exploited cannot pay. The maintenance of concerted education remains a way of maintaining the social gap that has been growing in recent years.

The reality of my center, which is a concerted center, is that there are fewer students of other nationalities because they do not request it. The law does not allow students to select, those who request it have many possibilities to enter. The person requesting a place, if at the time of the assessment is admitted, will be accepted and accepted as a plus. Acceptance is total, there is no problem. In my center a family that chose the center years ago, is already in the second generation of students, they are from another religion, they feel very welcome and accompanied.

I think the reasons for the current difference are several. They like to go with students of the same nationality or culture, therefore they choose schools in which they are more, in which they have acquaintances, than they have heard. I think that another reason derives from the stereotypes that exist about the centers that have been agreed upon: they think that "you have to pay", that "students are chosen", that "it is very difficult to enter" and that in them "beliefs are different and they don't admit them. " None of these reasons or arguments is true.

The location of the center also influences. There are centers arranged in the peripheries or in neighborhoods with a population number of other nationalities that become multicultural schools, with students of many different nationalities. I think there is not a great reason, but it depends a lot on the places, whether it is large or small cities …

"In high school, my two children eat for the price that one had in the school,"

I think it's very easy. My children's concerted school: 150 euros per month for each child, uniform polo 30 euros, tracksuit 90 euros …, I still? Concerted will be education, but everything else mandatory is a paste. Another example, when I took them out of the concerted one to the institute they ate both for the price of one in the concerted one, and on top they said: 'Mom the food is better'. Anyway, I would eliminate the concerted teaching, I am a defender of private and public. The concert is a want and I can not.

The segregating nature of according to which centers arranged (a large part of them for religious reasons) is evident in the fact that many in cases put obstacles to the admission of students of foreign origin. If there are still "schools for boys" and "schools for girls", it is not uncommon to think that the directives of these schools seek the "ethnic purity" of their classrooms. This implies a worrying lack of integration of the foreign population, even creating subsidiary public centers where ethnic-racial diversity is brought together, acting as contemporary ghettos.

IVÁN GARCÍA BERTACHINI | President of the Student Federation of the Region of Murcia.

One dead, two diagnosed and 44 cured on the first day of phase 2 in the Canary Islands