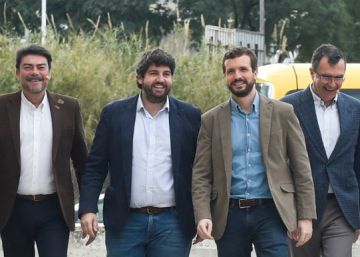 The eight Councilors of Education of the autonomies with Socialist Government (Aragon, Asturias, Balearic Islands, Canary Islands, Castilla-La Mancha, Extremadura, La Rioja and Navarra, in addition to the Secretary of Education of the Valencian Community, where the counselor is from Compromís) have signed a manifesto against the parental veto powered by Vox, a system that allows families to prohibit their children from attending complementary activities during school hours (where their presence is mandatory and the contents are evaluable). “They intend to break the school coexistence and the culture of dialogue to impose a blind and uncritical authoritarianism”, they state after the Government of Murcia (PP and Cs) announced that it will modify the decrees that regulate the Primary and Secondary curricula to fit the veto Parental in the centers.

Pablo Casado defended this Sunday the measure in Murcia, territory that the secretary of organization of the PSOE, José Luis Ábalos, described on Saturday as “laboratory of the extreme right.” The leader of the PP said that the controversy is a “smoke screen” to divert attention from the election of former Minister of Justice Dolores Delgado as the State Attorney General. Casado compared the words of the head of Education, Isabel Celaá, in arguing that children are not the property of their parents, with the ideology of communist dictatorships: “What they are telling me is like the families in Cuba, that the children are from the revolution? Are we going to also get the children to betray their parents if they are not good revolutionaries? ”He asked. “This is the point of no return, this is why we are in politics, much more important than territorial policy or anything else: this is that no one puts their hand in our homes,” he cried.

Casado supported the parental veto – “it is a good measure,” he said, addressing the president of Murcia, Fernando López Miras – and said it is not original Vox, although the popular did not carry it in their electoral program. “What happens? That our children can go to football or computer in the afternoon if parents decide and if there is a course on sex education or bullfighting we can not choose? In the Community of Madrid, we have three legislatures with this ”.

The workshops that seek to censor are approved in the school councils, where the parents are represented. The parental veto does not apply in Madrid. In fact, the president of the Community, Isabel Díaz Ayuso, of the PP, He has starred in several rifirrafes in the Assembly with Rocío Monasterio for the measure. “There is already enough tension so that Vox faces problems that do not exist. His proposal for the parental pin is a nationwide strategy. They don’t put politics in the classroom. I will not allow it, ”he said during a debate.

Citizens, who is part of the PP of the Murcia Executive, has maintained an ambiguous position on the parental veto. His signature is in the agreement closed last Thursday with the PP and Vox for the approval of the Budgets that orders “the establishment of an express authorization of the families for the participation of their children in complementary activities based on the precepts enshrined in the Constitution”. But once the pact was signed and the controversy broke out, Citizens said he would request a legal report to “clarify” if the measure is legal. Miras said, in any case, that he does not need Cs to change the decrees that regulate the Primary and Secondary curricula, since the modification should be proposed by the Ministry of Education (of the PP) and approved by the Government Council, where the popular They are majority.

Meanwhile, at the national level, some of the best-known faces of Citizens, currently run by a manager, have expressed their opposition. Edmundo Bal, deputy spokesman for Congress, said Friday: “No parental authorization will be required to attend these workshops.” The vice mayor of Madrid, Begoña Villacís, also said that it will not be applied in Andalusia, Murcia or Madrid: “It is a measure that we do not believe. It will not be implanted. We consider that education in values ​​is fundamental ”.

Vox conditioned its support to Murcia Budget to the incorporation of what it calls parental pin and wants to extend it to other territories. Rocío Monasterio requires its application as a condition to support the Accounts of the Community of Madrid. Socialist advisers warn that the announcement is already having consequences in the centers.

Fear in the teaching staff

María José Guerra, Minister of Education of the Canary Islands, affirms that the parental veto in Murcia causes some centers to suspend activities related to sustainability to avoid possible conflicts with families and the Administration. “It is the immediate consequence of creating a climate of fear in teachers; Education and fear are incompatible. It is intolerable to generate extra concerns in teachers before possible complaints ”.

In Navarra, his Education advisor, Carlos Gimeno, says that the right has tried to launch a “witch hunt” against its coeducation program in schools. They launched it in 2017 to introduce transversely in the subjects contained so that students acquire tools to detect situations of gender inequality or violence, as well as for training in affective-sexual diversity. “We must not allow the battlefield to be education again,” says Gimeno.

“Children are not owned by families or the State. In democracies we agree on common values ​​related to justice and respect for others; it is not about imposing ideology, but about educating in freedom ”, adds Miguel Soler, secretary of Education of the Valencian Community.