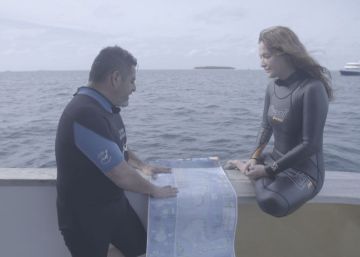 The Climate Summit sessions become tedious – many remain – and the succession of reports that warn of catastrophes is having less effect, so we are entertained by the adventures of Greta Thunberg, which is the pink chronicle of green. Before we lose our sensibility to the environmental crisis, it seems a good idea to look not at the disasters that are coming, but rather at those that human beings have already caused on this fragile blue planet.

Greta will not like to fly so far, but if there is a picture of paradise on Earth it is that of the Maldives, a series of atolls between turquoise waters, goldfish and peaceful sharks. There he takes the model of island-resort, a single hotel on its islet, with the cabins on foot of white sand or raised over the calm sea.

Special delivery, LaSexta's program traveled to that seductive country to look at its hidden face. Before the Maldives drank rainwater and had a more or less sustainable way of life, but a million tourists a year generate mountains of garbage that overflow the locals. Jalis de la Serna docked at Thilafushi, an infected landfill island – artificial and expanding – where tons of plastic are stacked as is or burned and pressed. He didn't stand there much because of the stench and because his eyes were crying. That crap already poisons the air, water and goldfish, while the coral dies because the Indian has become too hot.

Someday the sea will completely cover the landfill island, and all that garbage will be spread, as it will cover the beautiful islands and their resorts. The locals already think of moving to artificial islands three meters higher. They will never be the same. Someday we will remember that the Maldives existed.

An Israeli bombing interrupts a live of ‘Red hot’ with Gaza

Ana Rosa, on Pablo Iglesias: “He is the first who has criticized and pointed out journalists”

All songs from Eurovision 2021