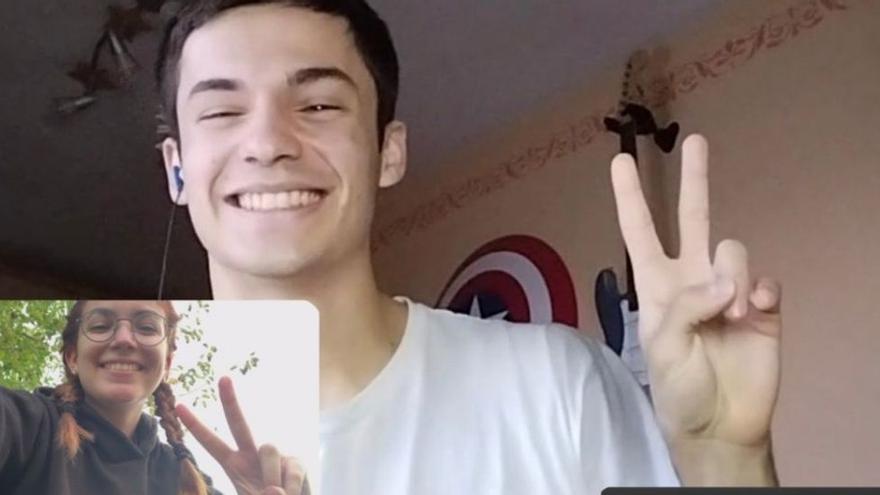 The coronavirus it has disrupted our lives and has given rise to, or hastened, changes in habits and routines. To the young people of 18, 19, 20 years, the alarm status and the corresponding lockdown forced March 2020 came to them at a time in their lives when relationships with their peers they are crucial. Children of a digitized world, found in the social networks alternative ways to search for that interaction. The hours of solitude at home go a long way and, a year later, many of those contacts have borne fruit in sentimental relationships forged in pandemic and through platforms such as Tinder, Instagram, Twitch or Yubo. And some of those relationships even defy distance. This is the case of Óscar, Samuel or Álvaro, students of Saragossa the first and of Barcelona the last two, which for a few months now have maintained a distance relationship with young people from Malaga, Alicante or Valencia. Or that of Elisabeth, Clara and Paula, who have discovered Tinder as a way to meet people.

The pandemic, the accelerator

Is a social trend That does not catch the experts by surprise. “The pandemic has been an accelerator. It has meant advancing 5 or 6 years at once,” he says. Enric Soler, relational psychologist and collaborating professor of Psychology and Educational Sciences at the UOC, who underlines that Generation Z is a “very digitalized generation. They have no problem using networks to meet people and feel accompanied”.

In the same line, James Funes, psychologist and educator, points out that “the digital world has changed affective relationships” and “multiplies the possibilities of meeting people”. “The pandemic has accelerated it because it has altered the possibilities of relating physically. At certain ages there are things that cannot be given up,” Funes reflects. “Relationships are life structures. It is a basic aspect and young people have looked for different formulas,” he adds.

From Tinder they emphasize that currently more than half of its users are people from the Generation Z, between 18 and 25 years old. Vicente Balbestre, director of Communication in southern Europe for this online dating platform, explains that before the pandemic they had already begun to see a change in the rules of the world of ‘dating’, but the pandemic has accelerated it. “2020 has changed everything. The loss and loneliness that the lockdown has caused in the lives of young people has led to a new phase in their intention to meet someone or to find new ways to connect.”

Balbestre points out that the use of Tinder grew like that of other apps due to the pandemic and although he admits that without it covid the figures would not have been so high, it does underline the change in the way in which young people relate to each other. “They meet people in other ways, not just the traditional ones (clubs, bars, parties, university…). In addition, many prefer networks as a preliminary step: through conversation they get to know that person. it gives security and confidence before jumping into face-to-face contact,” he explains. He assures that this system of meeting people “has come to stay” and “will be complemented by traditional ways. It adds up, it is one more window”. And Generation Z assumes it naturally: “Generation Z is breaking the mold of tradition and taboos by meeting new people,” he adds. Soler agrees: these young people “are honest and break taboos.”

And these relationships sometimes overcome distance. “The new technologies represent a very relevant factor, which is that there is no distance. But on a physical level, there is that distance. The good thing about these relationships is that since there are difficulties in getting together and seeing each other, the relationship is valued more and each member of the couple has more personal space and relationships are more oxygenated”, reflects Soler.

Óscar and Cristina, he from 2002 and from Zaragoza and she from 2003 and from Malaga, met in the spring of 2020 in a Twitch direct. “Every day we were the same people talking on the chat, answering the questions that the ‘streamer’ launched. That’s how we got to know each other”, recalls Óscar, a Chemistry student. One day, the ‘streamer’ asked his followers to send videos to put a face on them. That’s also how Óscar and Cristina put on a face. After a week, they switched to Instagram. And two weeks later, to the WhatsApp. Last September, they met in person in Malaga. “At first, a little scared because you didn’t know if reality was going to be like the virtual relationship. But it went very well, better than we expected,” confesses the young man. Cristina, an Audiovisual Communication student, took advantage of the December long weekend to travel to Zaragoza. And at Christmas, it was Oscar’s turn. “We take advantage of bridges and vacations, what we can. Now it’s Easter, but we will try to meet before,” he explains.

Samuel, also from 2002, and María, from 2003, came into contact in August 2020. “I was bored at home and started looking for direct applications. I found Yubo and installed it,” says this Business Administration student from Barcelona. He saw several live shows of people who “explained his life” from his room until, at night, he “met” María, a girl from Alicante who studies Protocol and Institutional Relations. They hit it off and that same day they moved Yubo’s ‘relationship’ to Instagram. From there to phone calls. And last August, a year later, they met in person. Samuel made his first journey to Alicante. Then it was Maria’s turn to move to Barcelona. And so they go, like Óscar and Cristina, taking advantage of bridges and vacations. The last meeting, last Christmas.

Álvaro and Carla, both from 2004, contacted each other in August 2020 when his friends from Barcelona added him to a WhatsApp group they had with some girls from Valencia. With the clubs closed and the curfew in force in Catalonia, that group brought Álvaro and his friends to life. “Every day at 10:00 p.m. we connected and talked,” he explains. In January 2021 it was already clear that Álvaro and Carla had a special affinity and transferred the interaction to Instagram. And in May, they already moved on to phone calls. That month they saw each other for the first time, when the girls came to Barcelona for the weekend. There was a connection and the relationship took another step. “In the summer, she came a couple of times and I also went to Valencia. Christmas, I was too and I suppose that at Easter she will come”, explains Álvaro, who confesses that he “did not expect” that a sentimental relationship could arise like this. “Without the pandemic I don’t know if it would have happened”, says this 2nd year Baccalaureate student .

Paula, a second-year Political Science student at UPF, downloaded Tinder in November 2020 following a friend’s suggestion. “I did it without any intention of meeting anyone. Just to see”, explains this young woman from Granollers who prefers to meet people face to face. In this app, he contacted a boy, also from Granollers. “We talked for two days and it stayed there. Yes, we shared our Instagrams and from time to time we talked, but without further ado. It was last summer when Paula and Pere -the third-year Civil Engineering student- coincided at a birthday party. mutual friends and there they began their relationship. Paula assures that if it had not been for the pandemic, she would not have considered using Tinder. “I like face-to-face contact with the person better,” she says.

Elisabeth, from 2002 and a student of Political Science at UPF, began using Tinder in the spring of 2021, taking advantage of the fact that the Passport functionality, which allows you to meet people from abroad, was free. “I came to this app because a lot of people used it on Tik-Tok,” he recalls. “First it was out of curiosity, and then I used it a lot. It coincided with the fact that I hardly left the house because of the restrictions and I wanted to talk to people,” he explains. He found Alexander, a French boy who studies in Barcelona. From Tinder they went to Instagram and, although they do not have a formal relationship, they have become good friends.

Elisabeth’s classmate, Clara started using Tinder at the suggestion of her friend. It was in the spring of 2021. “The clubs were closed and I decided to use the app. I’ve met a lot of people, but I haven’t gone any further,” says Clara, who confesses that she was surprised to find many people on Tinder who I already knew “I thought, all of Mataró is here. How is it possible? What are we all doing here?” she says amused.