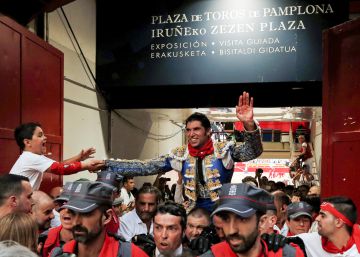 Bulls Núñez del Cuvillo, unequal in presentation, compliers in varas, noble and bland; The third one stood out for its mobility and the fifth and sixth for its quality. The latter was awarded with the return to the ring.
Antonio Ferrera: three punctures, thrust and three phantoms (silence); bajonazo (ear).
Miguel Ángel PereraUgly bajonazo (silence); puncture and almost entire perpendicular (ear).
Cayetano: lunge (two ears); Lunge (two ears). It went on the shoulders.
Square of Pamplona. 12th of July. Sixth run of San Fermín. Full.

Pamplona is a tombola, tom, tom, tombola; of light and color … Tómbola!

A toast to the plaza (the toasts of the sun are moved by the toasts of the bullfighters), a muletazo of knees (if they are several, better), a neat work (neither the depth nor the bond are necessary) and a thrust (no it matters a lot the placement) of fast effects are the insurance to walk two ears in this square, turned into a permanent blush for its null demand and for the shameful attitude with which the presidency directs the show.

The call Bull Fair of Pamplona -In the sun and in the shade- is a festive, gastronomic, colorful and bustling spectacle, in which bullfighting paints little beyond the presentation of the bull.

For this reason alone, Cayetano cut the two ears to the noble third bull, which did not fight in the hood throughout the fight and muleteó detached in a neat work, with little command and few bright moments.

The ovation of the afternoon (how curious!) Took it in the toast to the public and, moments later, went crazy in the sun with a windlass on its knees; already on foot, the matter went to less and the quality of the bull excelled over the superficial bullfighting of its killer. But he took an effective thrust and touched the two ears in the great sanferminera tombola.

Better as a bullfighter, more varied and gimmicky, a good seller of his merchandise, he was before the sixth, a happy bull and a good one who was granted the honor of returning to the ring. He received him with a long knees in the third, graceful veronicas and a galleo for chicuelinas to take him to the horse; He toasted Indurain, sat on the stirrup, and then passed over on his knees. Nobilísimo the animal, enrabietado and delivered the bullfighter, right-handed looking at the lining, turnstiles and chest on knees, before and after dislodging to the sand the crutch and the simulated rapier, and a good thrust. He emphasized much more the jewelery than the good bullfighting and that seemed the great effort of Cayetano, willing to become the winner of the fair. And he achieved it with great success before bulls bonancibles, which allowed him to be more aware of his theater than his opponents. The truth is that it formed a hubbub in style.

In view of which, Perera, who had been an aficionado and mechanic with the second encrusted, knelt on the knees at the start of the fifth task for a risky pass changed in the back and four muletazos with the right hand in the same position. He took advantage in his own way of the greedy and noble journey of the animal and drew some long passages by both hands, but below the readiness, fixity and transmission of the bull. He clicked -oh …! – and the big door closed.

Nor did it go empty Ferrera, which replaced Roca Rey in another incomprehensible decision of the House of Mercy, after three bullfighters had been left without fighting on Monday because of the rain and the absence of two winners of San Isidro, Paco Ureña and David de Miranda. Indescribable, too, the reason why Ferrera walked an ear after a drop to the room and a work of technical bullfighter and cold; and many loose muletazos and ventajistas prescribed the outcast first.

It was noticed, and in what way, that the bulls of Núñez del Cuvillo are designed for bullfighters with a star. Neither a bad gesture, nor a twinge, nor a look with bad fleas … Come on; no, please, I would miss more, you first. With that of fatigue that some pass and that others stand as winners with these substitutes of brave bulls …