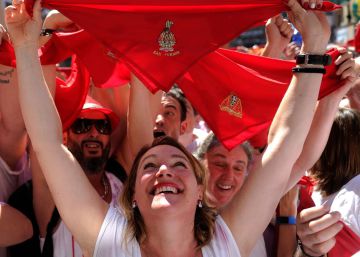 "Pamplona says NO to sexist aggressions". It is the phrase, in Basque, Spanish, English, French and German, found by those who arrive in the capital of Navarre in the luminous ones that usually collect incidents of traffic at the entrances to the city. That same motto is collected in the urban buses, the canopies, the fences and even the reusable glasses that the vast majority of the bars deliver, for one euro, to those who come to enjoy the sanfermines. Respect for parties in equality it is not a slogan that was discovered after the case of La Manada, but it corresponds to the fight that started feminist collectives and sanfermineras clubs to achieve a party in which women enjoy without fear.

Group rape by which five men have been sentenced to 15 years in prison by the Supreme Court put the national focus on Pamplona and its parties in 2016. The pack He filled television and radio shows, newspaper and gigas web pages, but the social concern in the society of Pamplona for the situation of women at parties has another key date: on July 7, 2008. That dawn, José Diego Yllanes, a psychiatrist who lives at the University Hospital of Navarra, killed Nagore Laffage, a nurse, at her home. Both were known by sight and coincided the night of the chupinazo in the old town of Pamplona. They arrived at the house together but Nagore's body went out inertly hours later in a car, in the attempt of Yllanes to hide the crime. He was sentenced to 12 years in prison for a crime of homicide by a popular jury in Pamplona. He served eight years and 11 months in prison, and, since the end of 2017, is in semi-freedom and works in a psychiatric clinic.

That was a controversial sentence that the feminist groups considered unjust but that was ratified by the following instances. The case of Nagore was the germ of Monday Lilacs, one of the most active feminist groups in the awareness of the role of women in parties and the need to enjoy them equally. They organize, on the eve of Sanfermines, the tribute to Nagore.

"Eleven years make the pain and the absence of Nagore much bigger", remarks Asun Casasola, mother of Nagore. Single house, who lives in Irún, returns frequently to Pamplona to participate in the Monday Lilac events, which are monthly concentrated against sexist crimes. She thanks the society of Pamplona for the love received after the crime of her daughter and encourages the youngest to continue going out into the street. "With Nagore's case, they did not listen to us, now with La Manada justice has finally heard our voice"He says. "The sentence of the Supreme Court means that it has been worth fighting," says Tere Sáez, Equality Technician in Estella and one of the most veteran spokespersons of the feminist movement.

The popular celebrations have been one of the objectives of the policy of equality of the different governments of Navarre, with a specific campaign since 2012. A year later they created the red or violet hand that has become the graphic symbol of the awareness against the sexist aggressions in sanfermines. The hand, registered by the Navarre Institute of Equality, has been exported even outside Spain and appears in giant format in squares and streets throughout the city.

Not only feminist Administrations and collectives have involved in this awareness. After the crime of Nagore, the sanfermineras clubs set in motion a protocol of action in their premises to attend to possible cases of aggressions or abuses. For several years, it was these groups that conducted an informal count of these cases until the Criminal Investigation Area of ​​the Foral Police began to monitor them, starting in 2013. In 2014 the City Council installed an information booth in the Plaza del Castillo in the one that centralizes the strategy "Pamplona free of sexist aggressions".

In these sanfermines the booth will be open until one o'clock in the morning. The activity of this campaign has multiplied since its start-up, from 3,200 informative events in 2014 to 14,000 in 2018. Last year there were 25 incidents attended by the protocol, compared to the 40 of 2017 and the 43 of 2016, the year in which the case of La Manada occurred. This year, the number of police complaints was multiplied by four. In addition to the group rape on July 6, 18 other women reported abuses and sexual assault – in which they do mean violence – during the sanfermines. The Chief of Criminal Investigation of the Foral Police, Eduardo Sainz de Murieta, he attributed it to the social awareness that encouraged the reporting of facts "Other times silenced."

During these festivities, 21 security cameras monitor the center of Pamplona in order to clarify these possible complaints. Until 2016, a third of the reported cases were unresolved due to the difficulty of finding the accused in a city that multiplies its population by four on the holidays.