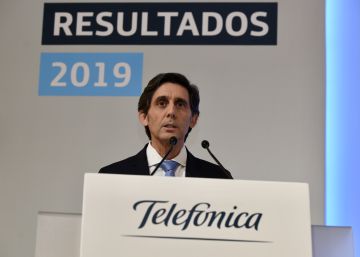 The executive president of Telefónica, José María Álvarez-Pallete, left this Thursday in defense of the tax on digital activities, the known Google rate, which has been approved by the Government to tax the activity of technology companies such as Facebook, Google or Amazon.

“It is about correcting a tax anomaly. The world is changing and the fiscal rules that there were for a more physical world are different in a more digital world. What it does is to correct an asymmetry,” he said in the press conference after the results presentation.

The top manager of Telefónica recalled that his group paid 8,700 million euros in taxes last year, compared to the minimum or non-existent taxation of companies that “do not have physical infrastructure”. In this regard, it was asked what is the difference between telephone calls made by a mobile phone and those made through digital platforms, and why they have to pay different taxes.

On the other hand, Pallete revealed that they are not considering claiming any compensation from the GSMA, the operator association that organizes the Mobile World Congress of Barcelona, ​​for the suspension of this year’s edition due to fear of the coronavirus, and encouraged other companies to follow suit. “We are analyzing not to take any action against the GSMA, because it is the way to guarantee its sustainability, facing the next edition of 2021.”

“We understand the reasons that have led the GSMA to the cancellation, due to the wave of cancellations, and we value the efforts made by the Administrations to guarantee that the system. We feel that it is not celebrated, because there is no better city than Barcelona, or country to celebrate it, “he added.

The president of Telefónica considers that the bad moment that the quotation is going on has no objective reasons, but he ruled out the adoption of short-term measures such as the sale of the fiber network that can boost the short-term price of the share, but that They could weaken the company in the future.

He defended the measures recently adopted as the separation of Latin American subsidiaries except Brazil for sale, because these will make Telefónica a “more powerful” and more sustainable company to “three, five or ten years seen”, which will result in a rise in action

“The plan we announced in November is the acceleration we announced five years ago: to be a much more relevant operator. We have to become a factory to produce data. If we wanted to be relevant to our customers we could continue to the ‘tran tran’ or deploy the networks … and we chose the latter. And we were aware that it is something that the market does not look at in the short term. “We cannot be looking at the price in the short term.”

As for the divestment of Latin American businesses, there will be movements in “the next few months” “We are negotiating, many people have approached us. We have a team running since December, to be an autonomous company in an operational way; and we are preparing to be autonomous financially. We have received samples of interest and we will take to the council the proposal that generates more value and has more certainty of execution, “said Telefónica’s financial director, Laura Abasolo. As for the deadline, “it will be in the coming months,” Abasolo said.

China’s richest man who made his fortune selling water