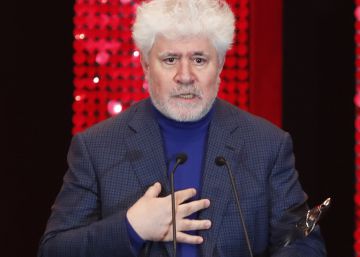 Pain and glory, the most personal film by Pedro Almodóvar, has been the big winner of the Feroz Awards, delivered Thursday in Alcobendas (Madrid). The film, which started as a favorite for the gala after reaching ten nominations in November, has received six awards in the seventh edition of the ceremony organized by the Association of Cinematographic Reporters of Spain. These are the first recognitions that Pain and glory He has received in Spain after a race in which he has already been awarded in Europe and the United States and culminated on Monday with the Oscar nomination for the best international film.

On television, the great winner has been Hierro Iron (from Movistar +) who has won in best drama series and best actress (Candela Peña).

In a year in which it has appeared as a favorite in all the awards of Spanish cinema, including the Goya that are celebrated on January 25, the film has received in the Feroz the awards for best dramatic film, direction, supporting actress ( for Julieta Serrano), script, music and leading actor (for Antonio Banderas, with the paradox that Almodóvar has spoken at the gala for him, who in turn had gotten into the skin of Almodóvar in the film).

The film is currently enjoying a great international projection thanks to its Oscar nomination. “The last moments that I am living, both in the United States and here, are all of glory. The film has been highly appreciated there by both critics and the public. That does not indicate that we are going to take the Oscars to which we are nominated There are other films that have also been a phenomenon, “said the Manchego director before the gala.

Actress María Hervás has premiered as a presenter and has taken advantage of her position to try to be irreverent (“more difficult than leaving the dressing room of Plácido Domingo”, she said, for example, on her role). Also debuted the new Minister of Culture, José Manuel Rodríguez Uribes, who has appeared for the first time in public since his appointment and has also had to face the humor, much lighter with him, of Hervás.

In the gala it has also been recognized Advantages of traveling by train, from San Sebastian Aritz Moreno, as the best comedy film. Different luck have had While the war lasts Y The infinite trench, in the group of favorites of the Goya, but almost absent in the Feroz. Alejandro Amenábar’s film, arrived with three gala nominations this Thursday and has gone blank, while the drama of Jon Garaño, Jose Mari Goenaga and Aitor Arregi, who opted for six awards, has finally won one ( best actress to Belén Cuesta).

Upon receiving the award, Cuesta has praised the realism with which the film directed by the group of Basque directors was made, and said that if the press remembers the cases of moles, like those narrated in the film, “a little justice will be done” with them, who have fallen almost in total oblivion. Julieta Serrano has received the award for best supporting actress for Pain and glory before thanking Almodóvar for her role, which she considers a gift.

Enric Auquer has been another center of attention by winning the two awards for best supporting actor: in film and series, for his roles in Who kills iron Y Perfect liferespectively. Javier Cámara, protagonist of Vote Juan, has won the award for best actor in series. The other awards for television productions, other than Iron) have been for Perfect life (from Movistar +, best comedy series) and Yolanda Ramos (best supporting actress for Paquita Salas).