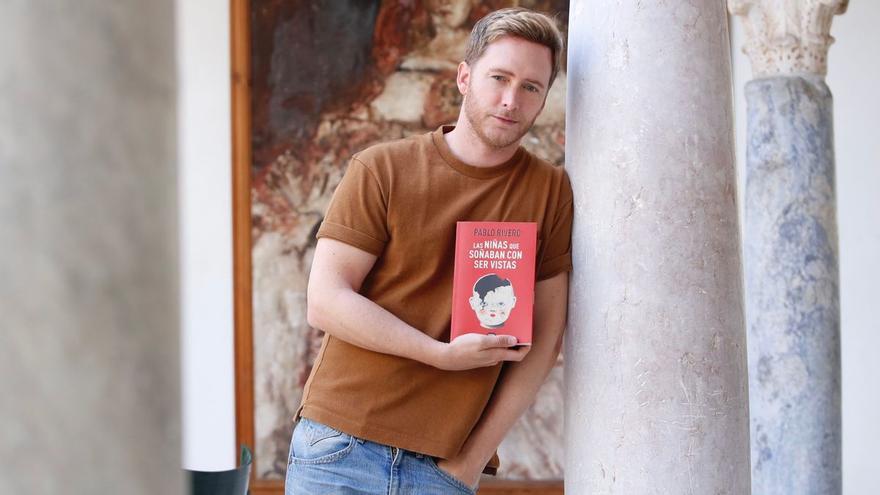 Not only has he starred several films and it takes years getting into the skin of one of the characters of one of the series most popular on television or on the tables of theaters across the country. Pablo Rivero is also a writer and it is with that facet that has come this Monday to Córdoba, where has presented his third novel, 'The girls who dreamed of being seen ', with which he enters, again through the thriller and horror, in the world of influencers and social media. Although this novel, like the other two, serve Rivero to delve into human nature, society and all its flaws. This book comes after 'I will not be afraid again' (2017) and 'Penance' (2020) and starts when it disappears Laura García Hernández, a fourteen-year-old girl at that he saw for the last time entering a well-known shopping center, when he was going to a mysterious appointment. A few days later it appears quartered in the parking lot on the ground floor. This afternoon he will talk about this argument with his readers, something that for Rivero "is a privilege."

A new novel and again immersed in suspense and terror. What attracts you to this genre?

The ability it has to capture the attention of readers to talk about many other things that, perhaps, at first, I would not consider. I am very attracted to real events, real crimes, because of the psychology behind it. I wonder what happens in someone's life to make them do such heinous things. In the case of this book, other than that, I do a lot of work on moral perversion, on people who, for power or pleasure, can afford to do terrible things. I like the crime novel because it allows you to talk about society, about the defects that we have. In this case, of adolescent girls, of their need for approval and success.

In what mystery does it enter the reader now?

The starting point is the disappearance of a teenager who wants to be seen, who dreams of being famous, and that means that advertising agencies notice her and turn her into a influencer. Here I make a metaphor of how girls literally die for being famous. Unfortunately, the female sex is the biggest victim of lurid events. For me it was also important to enter the fragility of the 14 years, when you want to eat the world but you cannot imagine the evil that is in it. I think that pretty much sums up the world of the internet and social media.

His previous novel was situated in the world of acting and this one does so in advertising. It moves through familiar terrain.

I speak of things that sound familiar to me and that I recognize. It is how I conceive writing, the genre is very funny, it has a game part, but the difference is to tell an in-depth story and discover something that the reader does not know. I write this book because I want to contribute something, or discover it myself, and I force myself a lot to investigate and delve into issues that concern me, such as influencers.

Do you think that vanity, self-centeredness, is the sin of our society?

It's even worse, I think it's insecurity masquerading as vanity. We are all looking for liking, approval, success status.

Are you inspired by your surroundings? How do the stories you tell come to you?

I am constantly looking for news, facts and events. All that turbulent, which implies a psychology, a strange behavior, I usually keep it to myself. With this book I have made an investigation of some events that happened in the 90s that for me were very significant, very sweet for a crime novel, because they had certain points in common that led me to create a very terrible atmosphere, such as cannibalism or different acts that respond to rituals or power pacts. And then everything has to do with social work, which is the essence, what I can contribute on this issue.

Do you believe that evil exists or is it so frightening to think that we need to justify it with a mental illness?

I believe it exists. In my first film I was a parricide and my first novel also begins with a parricide. There I liked to delve into the idea that evil does not exist, but that sometimes events are what put us on the edge and lead us to do terrible things, and I also delved into my first novels. But, nevertheless, in this third I have realized that there is evil in the world. I investigated in the deep internet, where you can get everything with money, and that means that there are people who are allowing that and that you have to have a degree of evil to do it. In the novel I summarize it when the desire to be seen is combined with moral perversion.

Social media has changed our lives for the good and for the bad. Worth?

It would be necessary to do a more in-depth study than I can do. I put my focus more on education. The important thing is to know what you are influencing and be aware of the power you have.

He studied journalism to learn literary techniques and has ended up becoming one of the best-known actors in Spain. Do you feel that you have left your vocation as a writer in the background to that of an actor?

No. I wanted to write and be an actor. But what I liked was to evade reality and tell stories and not sit on a set to give the news, which I later ended up doing as an actor in Tell me and I have really enjoyed it. I don't feel like I've ever given up writing. I started writing at 18 and have always carried it by the hand, but the series' early success has clouded it a bit, in the sense that no one knows I do. And there is something about journalism that helps me and that is increasingly present, which is to specify, the essence. It makes the journey of the novel much easier for you.

What does literature give you?

It gives me full freedom and the great pleasure to develop my creativity and enjoy, in addition to the privilege that there are people who wait for my books. That for me is the best gift, my dream.

What would make you happier, a literary award or a film award?

I would love to have both, but I don't believe in awards much. For me the prize is that people buy my books, that the word gets out that they are good and that whoever reads to me continues to do so.

Have you thought about writing about other topics?

I read other genres and each story lends itself to something. I like the mystery, the thriller. What I'm writing now is also a bit dark, but I think it gives more breathing space.

This novel was written during confinement. At least he took advantage of the situation. How have you lived this year?

In different stages. I confined myself before they forced us and I have lived it with a lot of worry, fear and pain. The luck of having a passion is that, in the end, I was able to hide behind the book and put all that energy to create into it. And it saved me.

Also 'Cuéntame' has reflected this moment. How did you feel filming this reality?

We live it in a strange way. The plot of 2020 tells, not so much the pandemic, but how it affects the characters. And I was eager to reflect a sector of society that for me had to show itself. I liked to go hand in hand with the scriptwriters to pay tribute to those people at risk, to all the elderly, who have been the most affected.

After seeing him playing a role for 20 years, it is difficult to dissociate Pablo Rivero from Tony Alcántara. What about one in the other?

This is the starting point of Penance. I was able to write about it because I have never had any conflict with Tony Alcántara. We are very different and very similar at the same time. I think the success of the series is that we have all had such solid characters that we have been able to allow ourselves not to show that we are making a character, to relax. When you have a good story and a good script, the character goes alone.

Has Tony Alcántara been a slab in your career?

No, but it has sometimes prevented other jobs from being done. That is a risk that I take and I am very proud of my character. You cannot want success and go out on the street and not be known to anyone.