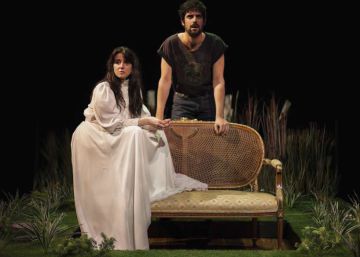 TO Pablo Remón he was proposed in the Theaters of the Canal de Madrid (Sala Negra, where he presented The mariachis last year) ride Doña Rosita the single. He hesitated, said no and then yes, because he is at risk. Or risks, in the plural. There are many here. To start, prune the text of Lorca and reinvent it with his texts. And resituar it in today's time. Riesgazo: that they accuse him of sacrilegious and small. Betrayal or entry through side doors? I see a lot of humor, which is not always well received, but it is an unequivocal sign of humanity, and much elegiac poetry and, in short, many noses to this free and turulatory version: Doña Rosita, scored. He has wanted, he says, to remake it and, “based on a foreign material, be more personal than ever. Now I feel the work as mine as any of the ones I've written. ” Another risk: leave the cast in three (Fernanda Orazi, Francesco Carril and Manuela Paso) playing a handful of characters.

Carril is the scorer, a transcript of Remón himself, addressing the public, narrating his doubts, his jokes about the engoladas notes (or the desire for symbols) of some specialists; and with the purpose of writing down, there are two more, for me capitals: he wanted to make “a documentary about the process of writing a work about time” and “a spell, using Lorca, to resurrect certain dead people of my life”. Olé might. Lane unfolds, triples and transfers. And I do not count, both ways, everything that Fernanda Orazi and Manuela Paso do because we would not end. I have seen them very funny in other works, but here they are bubbly, hilarious, sentence by sentence. And also very sad, and a mixture, a passing from one thing to another without you just noticing. There it is, of course, Rosita and Rosa (Orazi), who is also the scorer's wife ("brilliant philologist"), and Paso brings out the creation of Petra, the Romanian maid, who looks like Ama's relative. Orazi has unexpected Galician and Catalan accents, and echoes of the dislocated Tita Merello, one of the queens of the Argentine comedy; Paso can be very Andalusian and very Russian. Both dazzled me incarnate, formidable idea, the ghostly Aunt Carmen and Aunt Pilar, with whom the Scorer spent every summer of his childhood in a small town in the Castilian province. They return to tell him "to make that theater so beautiful and delicate", because "we were Rositas: we felt a lot of identification". They appear while the scorer is frying some croquettes that the aunts taught him to do: in my eyes, there appears Mihura and, closer, Sanzol's kinship in Quintanavides, “to those who did not let them be delicate”.

Perhaps that is the core of Remón's story: the portrait of the Rositas, Aunts Carmen and Pilar, is a beauty that seems to also combine essences of Chekhov and Carmen Martín Gaite. I love the fluidity of the stories. The scorer goes to a Starbucks to read the play and the banal dialogue of two teenagers sneaks in, and he realizes that "they were Rosita's age at the beginning of the play." The characters (and the interpreters themselves) are interrupting, reciting or summarizing, they comment ("the pressure of today to have a partner is still enormous"). Some original profiles change: the melancholic Don Martín is more pissed off. In the second part, I love that the scorer, more and more juggler, brings Carmen and Pilar together in one, which Aunt calls: "He will no longer be my aunt, he will be Rosita's." And Aunt Carril embroider every time her companions are Rosita and Petra: when there is art and power, in the theater you can play and make anything credible.

The wait for the move is Chejovian to the hilt. The boy in a woman's costume, almost a dream of Lorca and surreal, gives way to the bleak love story of 20 years ago: 1988. The boyfriend is on his motorcycle, and Rosa has returned from a dance dressed in an eighteenth-century gala . Sudden impression of a bridge between two times, with one of the best dialogues of the work. Another brilliant idea, almost of oneiric musical, that seems filmed by Coppola. And more things happen that I will not tell you.

There are dialogues in which, I imagine that in search of intimacy, the volume falls too low and some words, some phrases are blurred. Where else I noticed that was, pity, in the passage of the motorcycle and the farewell. A premiere paste, which will surely be resolved in a few functions. A matter of measuring it with the public response. The important thing is the humor, the melancholy and the sweet madness of the text, which distill its three interpreters in the hands of Remón.