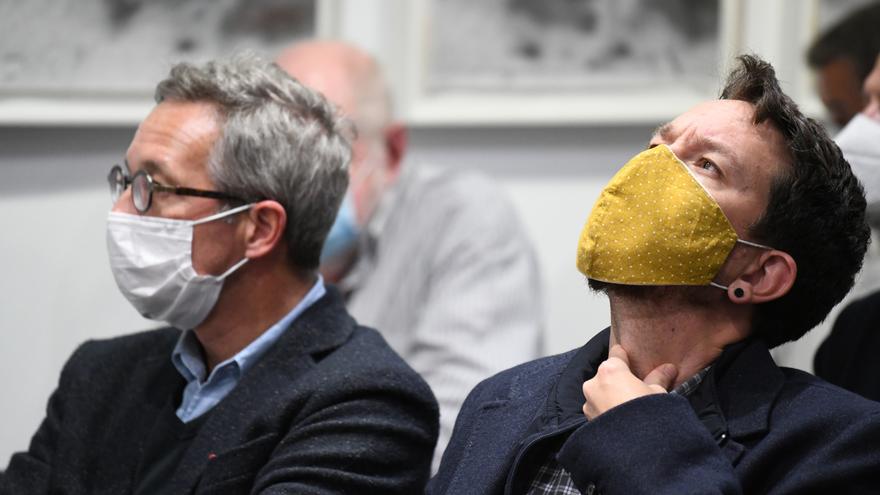 “The good thing about not having political responsibilities is that one can say these things freely,” Pablo Iglesias said in one of the moments of his conversation on Tuesday with José María Lassalle at the Generalitat Delegation in Madrid. He is no longer vice president, he no longer has the obligation to be optimistic – rulers are always optimistic – he can now take care of drawing a gloomy picture if certain policies are not adopted with which to solve serious problems. When Iglesias wants to be concerned, he has the ability to appear extremely concerned.

The reason for the meeting was the beginning of a series of conferences organized by the Delegation focused on the dialogue between the Spanish and Catalan institutions. Also for the presentation in the same room of a collective book published by the Catarata publishing house –’Catalonia-Spain: from conflict to political dialogue? ‘- in which 60 authors have reflected on the future of this conflict and the ways of solving it. The wide roster of collaborators includes few representatives of the right that marks the step in that world. In these settings, the appeal to dialogue is viewed with disdain or outright rejection. They only expect the winners of the Catalan elections to surrender and to appear at a police station with their DNI in their mouths.

It is curious that the right wing denies that it is an authentic political conflict, but rather that some politicians violate the law and therefore must receive the corresponding punishment. Conflicts are inherent to democracy. The difference with dictatorships is that you can live with them without having to open your head to others. “A democracy must always house within itself the option of dialogue,” explained Lasalle, who was Secretary of State for Culture in the Government of Rajoy. One of the great objectives of democracy is to “neutralize conflicts.” It may not be possible to reach the solution that satisfies everyone, among other things, because such a level of perfection may not exist, but dialogue is a tool for coexistence that, at the very least, should serve to understand the opposite.

That’s the theory, but Lassalle himself is pessimistic. “A part of Spanish society, and also of Catalan, is very comfortable installed in the conflict,” he said. It is not only comfort, but it is a strategic choice. It is in the case of the Popular Party and Vox, and also in that of Junts per Catalunya. Confrontation is great, because it doesn’t require you to ponder different solutions. You just have to lower your head and load and the others move away.

Lassalle is a ‘rare bird’ on the Spanish right. In the first place, it is liberal, not the use of the leaders of the Madrid PP who call themselves liberals and are more like conservatives who are in favor of lowering taxes, not like the French right, for example. Furthermore, he believes that the growing support for far-right parties in Europe is one of the biggest amendments to the totality that European liberalism has suffered. He has no problem stating that the historical conflict between Spain and Catalonia has its origin in history, and in many other things, which places him in the field of the country’s enemies in the most barracks of the Spanish right.

One of the great problems of the dialogue table, as of the very idea of ​​dialogue as a way to find a solution, is that it is not very clear what can be negotiated, and that is why the book presented on Tuesday serves to offer some certainties . In any case, when politicians speak of this dialogue, it is easier to hear generalities. It is not because of incompetence, but because of the realization that the positions are so far apart that it is not clear how they can be channeled.

Iglesias is clear about where that dialogue should go. What happens is that he is no longer in the Government, as he recalled on the spot, and he does not have to cut himself. That means that he is betting on things that are very far from the priorities of Pedro Sánchez and the Socialists.

The former leader of Podemos is also pessimistic or at least he is sure that reality is loaded with black omens. It is not certain that they will be fulfilled, but it would be delusional to think that they are impossible. Yes, he even said at the beginning that “we live in times that are somewhat reminiscent of the Weimar Republic.” When you make that prediction, people are not feeling their purse, but their neck.

Iglesias stated that the dialogue table, in which he participated in its first edition, is unavoidable. However, he put conditions on it. At the outset, he said that there are two options for the future in Spain: a government of PP and Vox that will go the way of “democratic involution” or that “the PSOE governs with forces with which it has never governed”, and not he was referring only to United We Can. It is about a structural alliance between social democrats and nationalists –some of them pro-independence–, a dish that it is quite clear that the PSOE will reject. In fact, Iglesias affirmed that if the dialogue table is not useful to negotiate this scenario, “it is not worth anything.”

Iglesias himself ruled out this path of collaboration insofar as he affirmed that there is no common strategy in the current Catalan Government. He defined the ERC-Junts coalition as a two-party “confrontation ground”.

He also had time to point out something that he has already commented on in a radio talk show: the idea that, like the Sánchez government, it is convenient to call elections next year. This is not that it is countercyclical, but rather suggests one of the many ways a government can commit suicide in the current economic situation. The most concrete argument he gave was that it does not seem that the regional elections that will be held before the next general elections are going to benefit the PSOE and Podemos. “You have to be prepared for them to be held at any time,” he said in a message that could be addressed to Sánchez, Yolanda Díaz or both.

It is very likely that the right will be delighted with this notice. She seems too nervous to wait until the end of 2023. It is also possible that Moncloa does not like such speculations at all. In any case, without a position in the Government, to see who tells Iglesias that he cannot have an opinion as in the old days.