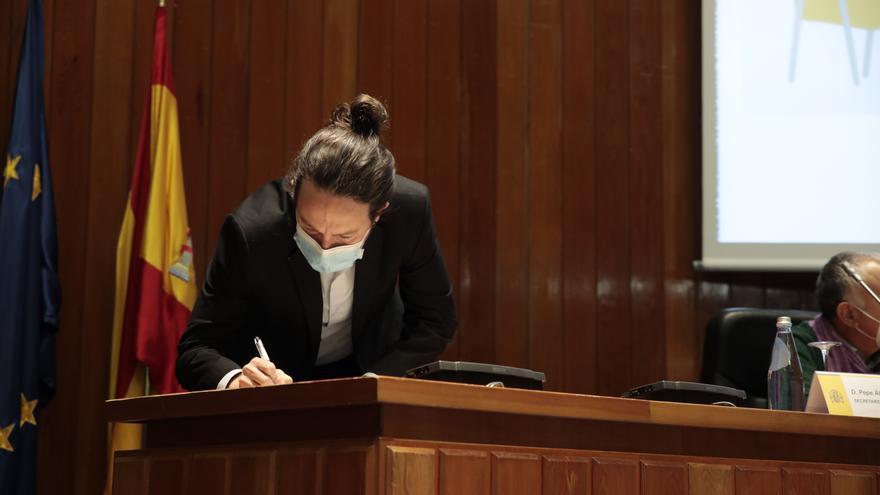 The still second vice president of the Government, Pablo Iglesias, has issued a warning to the PSOE on Thursday about the housing law that his department is negotiating with the Ministry of Transport of José Luis Ábalos and from whose draft the Socialists have excluded the limitation of prices of rent in stressed areas. "When a government agreement is signed, it is to be fulfilled," he assured in a brief speech after signing the agreement with employers and unions to inject up to 6,000 million into the Dependency system. "Not complying with it is disrespecting the citizens," he said. And he added: "United We Can not consent to lack of respect for citizens."

Iglesias has argued that the coalition agreement includes "regulating the price of rents." But the PSOE defends that its proposal to give a tax credit to owners who lower the rents they charge to tenants complies with that document. In fact, the Minister of Finance, María Jesús Montero, declared this morning that she hopes United We can "reconsider" its rejection of the draft presented on Wednesday by Transport, two months behind on what was agreed in the Budget pact. And 48 hours after the secretary general of Podemos announced that he is leaving the Government to lead his party's candidacy for the Community of Madrid on May 4. It is just the opposite that happened during the Catalan elections last February.

It was not the only reference to the housing law of the day. The Minister of Equality, Irene Montero, has criticized the document of the ministry of José Luis Ábalos, pointing out that the proposal "involves giving money from the taxpayer to the one who has the most." "They will rectify", he has predicted. Montero has also pointed out that "if the law breaches the agreement, it can only leave with the support of the PP" in Congress, which would, in fact, imply "a change in the PSOE partner." And he has concluded: "What is signed is a sacred word."

In a Madrid key, Iglesias has responded to the motto that Isabel Díaz Ayuso has raised for the pre-campaign, "communism or freedom", and that he announced precisely in response to the candidacy of the leader of Podemos. "Freedom is not the freedom to impose abusive prices. There is no freedom if a family cannot access decent housing," he said, to defend that his position involves "closing ranks with a constitutional principle." Iglesias has also argued against Ábalos, without citing him: "Housing is not just a market good, it is a right."

Iglesias has defended the agreement that he signed this Thursday with CCOO, UGT and CEPYME and that will allow "to inject up to 6,000 million to the Dependency system in the next three years. To act the president of the CEOE, Antonio Garamendi, has not attended, despite the fact that it was foreseen since a very substantial part of this amount will go directly to the companies that provide care services to dependent people.

Iglesias has assured that "a little over a year ago no one thought that the Vice Presidency and the ministries of Unidos Podemos could reach agreements with employers and unions," as has happened uninterruptedly since January 2020. First, to raise the SMI; then, for the ERTE and other measures to contain the economic crisis caused by the pandemic or for the reform of the figure of the riders, among other.

"We govern and reach agreements," defended Iglesias, who said that this Thursday "an injustice is being repaired" and is "reversing a way of managing crises that did damage to the homeland, cutting rights and with policies of massively ineffective austerity. " The second vice president has assured that the signed plan will put an end to the fact that "230,000 people with the right to this benefit do not receive it" and that the "precariousness of workers, almost all women." "In a single budget we are going to reverse the cuts" of the PP, he concluded.