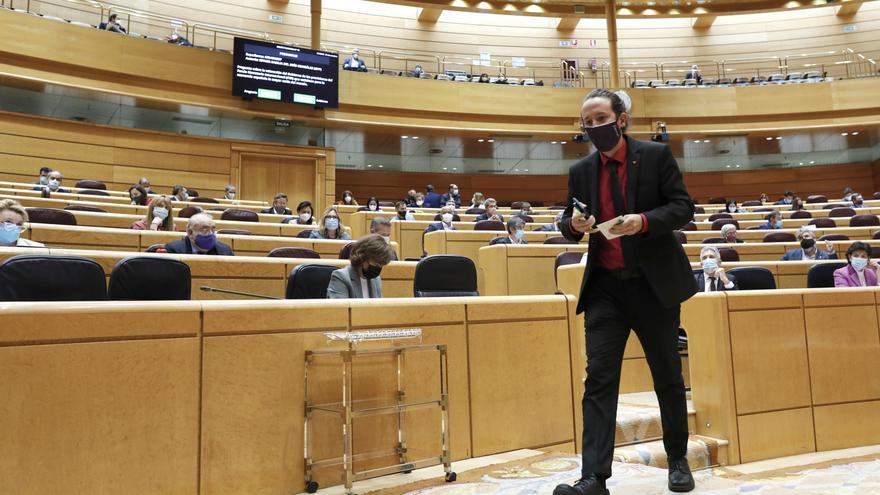 The legal representation of Pablo Iglesias has asked the judge in the Dina case, Manuel García-Castellón, to order the expulsion of the Vox case after he has presented an accusation document in which he requests 13 years in prison for the leader of We can despite the fact that the only condition that it has is that of injured. Podemos’ lawyer describes the letter from the far-right party as “procedural fraud.”

García-Castellón accepted the appearance of Vox in September despite the fact that in the same car he rejected the party’s complaint for being directed against Iglesias and others not investigated in the case. On October 7, García-Castellón issued the order to end the investigation and proposed to try Commissioner José Manuel Villarejo and two journalists from the disappeared Interviú for revealing secrets in the Dina case. At the same time, he presented a reasoned statement to the Supreme Court requesting the indictment of Iglesias, given his status as a gauge, as well as Dina Bousselham and three other people. García-Castellón made that decision despite the fact that the Criminal Chamber had forced him to return the status of accused to Iglesias.

The order of transfer to abbreviated procedure dictated by the judge can be appealed by the parties, who can also present an indictment. This is what Vox has done, only that the party has ignored the three defendants and has directed exclusively against two people whom it cannot accuse. The ultras accuse Iglesias of false denunciation, procedural fraud, disclosure of secrets and computer damage. For Bousselham they request eight years in prison for the same crimes, except for computer damage, which they substitute for false testimony.

According to the letter of Iglesias’s lawyer, Vox is “fully aware of its action contrary to law, lacking any legal basis and intended solely for the political use of having made alleged accusations that are not such and that lack any value except for partisan use contrary to procedure ”. It is, adds the lawyer, “a clear procedural fraud, an action that violates the rights of the parties and must lead to the expulsion of said popular accusation.”

The representation of Iglesias reminds the judge that he had already warned him in his letter against the character of Vox that the party had stated “verbatim that it did not come to exercise any accusation against those investigated, nor for the facts that are the object of the piece, but rather against persons not investigated and due to events unrelated to it ”. Despite this, García-Castellón admitted them as a popular accusation.

In its letter, Vox requests the practice of a series of proceedings, including the statement of the lawyer expelled from Podemos José Manuel Calvente. From the set of proceedings they requested, their position on the classification of the facts attributed to Villarejo and the two journalists will emerge.

Legal sources assure that Vox, in addition to being expelled from the case, risks being sentenced to pay the costs and a fine for acting in bad procedural faith.

The Criminal Chamber of the Supreme Court has yet to decide on the rationale raised against Iglesias by Judge García-Castellón after a report from the High Court Prosecutor’s Office. It already has an internal Anti-Corruption note in which the specialized prosecutor’s office reports the development of the case and reiterates its position contrary to the accusation of the second vice president due to lack of evidence against him.