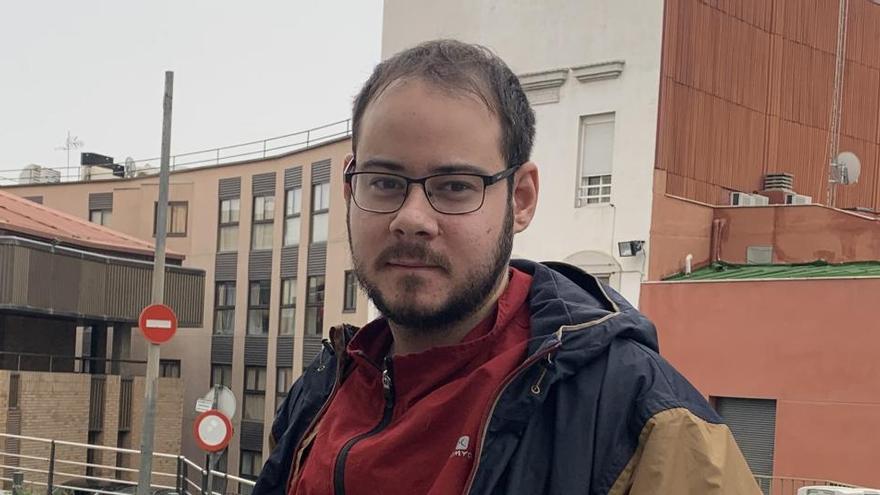 Rapper Pablo Rivadulla, artistically known as Pablo Hasél, will enter prison in seven days. The Supreme Court has sentenced him to nine months in prison, which may be increased by other open judicial processes. In this case, it will be for insults to the Crown, the State Security Forces and glorification of terrorism, due to the content of its letters and some of its pronouncements on social networks. He has already announced two things: that he will not present himself voluntarily and that this sentence will not serve to change his discourse.

– You received, a few days ago, the notification of your imminent entry into prison. Did you expect it?

-Yes, I expected it for years. Nothing surprises me, I am aware of the type of state we live in, that there is no freedom of expression. My case is one more example that corroborates it in practice, and precisely because I am aware of the state in which we live, I do what I do: to conquer another type of state.

-He is not the first person judged for the content of his lyrics or statements in networks, but he is the first in Europe to go to prison. Do you think this is an exemplary sentence?

-Yes, totally. It is a sentence to scare the rest. They have been harassing me with all kinds of repression for many years, not only with convictions, and they have not bent me. They know that I will not give up because I am incarcerated. They are using me as a scapegoat to scare the rest and try to prevent with terror that people can express themselves freely, show their anger and discontent at a situation in which more and more people are condemned to misery.

-He has already warned that he will not stop talking about these issues.

-No. Since I was arrested in 2011 and made a search at my home for making songs, all of this reaffirmed me more, has strengthened me, and has given me more reasons to know that I do not want to live in a state in which, to tell even proven facts about the monarchy or the police, put you in jail. I refuse to accept this barbarity and stand idly by.

-This follow-up dates back to 2011, when they investigated him for the topic. Death to the Bourbons., A song that he follows on YouTube. How have you lived these years under the magnifying glass?

-In 2011 I was charged with 20 songs, that was one. The repression goes beyond sentences. I have not been able to have an account in the bank for a long time, nor can I have anything, because I have been repossessed for many years. I have an added difficulty finding work, I have suffered numerous registrations at stations when I have traveled to give concerts, they have let me know, since 2011, that my mobile is tapped, they have harassed my closest environment. I would summarize it by saying that it has been constant harassment with the intention of bending me. As they have not succeeded, this imprisonment is revenge.

-He will not present himself voluntarily the day he has to enter prison. One last act of resistance?

-Yes, it would be a humiliation if I went to prison and knocked on the door to be imprisoned. Faced with such an unfair sentence, one refuses to surrender to the jailers to anything that has a minimum of dignity.

-Your conviction has aroused reactions of all kinds. He affirmed that, if the PP were in the Government, the support would have been greater. Do you miss more solidarity on the part of certain sectors of the left?

-Yes. In fact, I have already had more support from certain sectors when the PP was in the Government, and they blamed it all on the fact that the PP was in the Government and that we were heading towards a pro-Franco drift because of that. It turns out that, now, we see that there have been no changes in this regard, and it turns out that so many people are no longer scandalized or point to the Government as guilty. I did not expect absolutely anything from this government because, among other things, they promised to repeal the gag law, and not only have they not done so, but they have approved the so-called digital gag law, which expands it further. So with other repressive laws and other electoral promises that have ended up being smoke. Yes I found it disappointing, and I expected something more from the artistic world, for a matter of camaraderie. There is fear, because many doors are closed when getting wet according to what things, but if we are not aware that it is an attack on our fundamental freedoms, and not something that only affects me, they will continue to cut more and more freedoms, as we have already seen in recent years.

-Has, however, had quite a few shows of support. There has also been criticism of certain parts of his speech, especially for his statements about ETA and the Grapo. Do you regret having said according to what things?

-I do not regret at all. I have never supported any action against innocents. In the specific case of ETA, I disagree ideologically in many things, also in many ways of acting, but in others I have supported it and I do not regret it. I keep saying that, in the face of state violence, all methods of struggle are legitimate as self-defense. An armed body is going to kidnap me to imprison me. Isn’t that violence? Isn’t it violence that they deny us fundamental rights such as decent work, like a decent home, that they are sending a lot of people to unemployment and misery, or that there are elderly people with pensions that do not allow them to live with a minimum of dignity ? It seems very hypocritical to me that there are people who are scandalized by my lyrics and not by all that daily violence that they impose on us. I would love not to have to feel anger or have to express it with songs or writing; it would mean that we live in a just society.

-Do you think there could be a certain Streisand effect with your lyrics?

Totally. And so it is. I made the decision to stay here and not go into exile. I have been twice to Belgium and once to Venezuela, which are places where I was offered exile. I have not done it because I have not made an analysis of what would interest me most on a personal level, but on a political level. If they are exercising all this repression to silence the message, I make this analysis: I started in this to make the message known, then I only have two options: exile or jail. How is the message going to spread further? I think that by imprisoning me, because it is something more scandalous, and that he even agrees with us. Valtonyc’s exile has helped to normalize his situation and not to have more struggle and solidarity. If being imprisoned is going to generate more struggle than exile, I decide this.

-It is a political act.

-Do you consider yourself a political prisoner?

-Objectively, even if someone I defend may or may not agree with, I am going to be a political prisoner, because I am imprisoned for a political struggle.

-In light of the latest information on the activities of the King Emeritus, whom you brand as a thief in your letters, did you think that your case could turn around?

-It is that when I released the two songs about the monarchy, Death to the Bourbons and Juan Carlos el Bobón, you already knew what the monarchy was doing. Another thing is that the media here have covered all this for decades. It was when the international media began to uncover everything, when they had no other to tell about it. We have been convicted of insults to the Crown, which they are not, because we are counting well-proven facts, because if you show that they are not insults, they condemn you the same. It has helped many people who thought we were exaggerating to realize that they have condemned us for telling reality.

-The freedom of expression is taking over the public debate these days, due to its case, but also due to the suspension of the Vox account on Twitter for incitement to hatred. Being from the opposite ideological chord, what do you think?

-I’m not a hypocrite. Because someone disagrees with me, I don’t want them to be imprisoned, but I am not in favor of freedom for fascism. I think that fighting for the rights of immigrants, homosexuals or women cannot be put on the same level with what they do. Hate crime is to protect groups that suffer this type of discrimination, but they end up turning it around and using it against us. Yes, I am in favor of the persecution of fascism.

-Would you understand that someone qualified as a hate crime some of your lyrics with references to shots in the neck?

-As I say, I’m not going to be a hypocrite, of course it’s hate. Che said that greater than the love of freedom is the hatred of those who take it away from you. I hate injustices, the guilty who profit at the cost of imposing them with violence. Yes, I show hatred against that, but when they define what a hate crime is, they are not referring to protecting the powerful, but the oppressed groups.

-You still don’t know how long you will be in prison.

-I still do not know. That uncertainty that prevented me from making short-term plans is part of the sentence, they play at that psychological wear. I think that the fact that they imprison me and I don’t know which jail they are going to send me or how long is also part of that game.