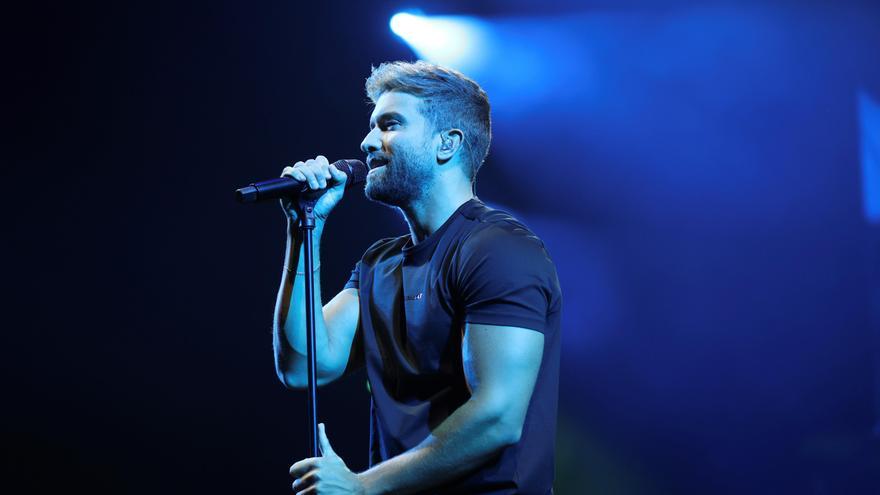 Madrid, Jul 6 (EFE) .- The artist Pablo Alborán has made the 5,000 people who have wrapped him up at the Wizink Center vibrate with “vertigo” tonight at the “Vertigo Tour 2021” tour start concert, an event in the one who has wasted passion and feeling with each of the lyrics of his songs.

With the sold-out poster -as it had happened on other occasions-, the singer, dressed in a dark shirt and long jeans, has been accompanied on this cool summer night by his band and his “family” -that is, his followers- in this “so special evening” for the people of Malaga.

After 9:35 p.m., the old Sports Palace has fallen into darkness and voices have begun to sound encouraging the artist to come out on stage, who had not stepped on since before the Coronavirus pandemic, to present his latest album study “Vertigo”.

“Good night, family, we are here again, we are back in the ring again,” said the singer in his first statement to his audience, after starting the show strong with “Taboo”, the collaboration he has with the American singer Ava Max, “No va a ser”, from his previous work “Prometo” (2017), and “Pasos de cero” from the album “Terral” (2014).

An emotional Alboran wanted to remember “all those people who have and are suffering” both from the Coronavirus and from violence. In this sense, he has asked for “justice” for the homophobic murder of Samuel that took place last Saturday in A Coruña: “We live daily an increase in violence, racist, sexist and a few days ago homophobic, it cannot be tolerated.”

“Love calls for freedom, calm and also love itself. Through this concert I hope to return that, thank you for the enormous effort you have made to be here with me on this special night ”, he added.

Those two tracks have not been the only most popular songs from Alboran that have sounded tonight, since the singer-songwriter, in addition to playing “Vertigo” in full, has not disappointed with other songs such as “Remember me”, “Saturno”, “or “Who”, from the album “Tanto” (2012).

Behind him a huge 16 meter wide screen has turned the show into a true visual spectacle, as the projections were often integrated with the stage.

Between the dramas and sentimental joys, the musician has sung to Madrid accompanied by his black grand piano the song that gives the title to his seventh album “Vertigo”, which would not have been so spectacular without the lighting of the mobile lanterns forming “A sea of ​​love”.

“I didn’t know whether to sing this song or not because I wrote it in confinement, because deep down it reminds me of a horrible moment for everyone, but on the other hand, the good side of the people. A generous side. I want you to feel with this song that together we can do whatever we want ”, he said.

With the piano he has also performed “I promise”, a song with which the host has shed tears of emotion when he sees a Wizink Center overturned with his songs, chanting the chorus of it. “I promise you, Madrid, that we are going to become eternal.”

Alboran is romantic by nature and that is why slow and sensitive songs dominate against the Latin and more urban sounds that he has wanted to include in his repertoire. One of the most sentimental moments has been an acoustic guitar in hand that has dazzled the audience with “Solamente tú” and “Refugio”.

“People who know me know that when I’m happy, I get very flamenco,” he said with a laugh.

The singer-songwriter from Malaga has ended the appointment, with the band back, with “No está en tus planes” and “Fiesta”, and with a final message: “Thank you very much family, I will never forget it. Thanks for never letting me go, you guys are great. Long live music and long live love ”.

At the moment, this small tour that has started tonight in Madrid only has, at the moment, six confirmed dates, in which it will pass through the cities of Marbella, Benicàssim, Girona, Chiclana and Mérida.