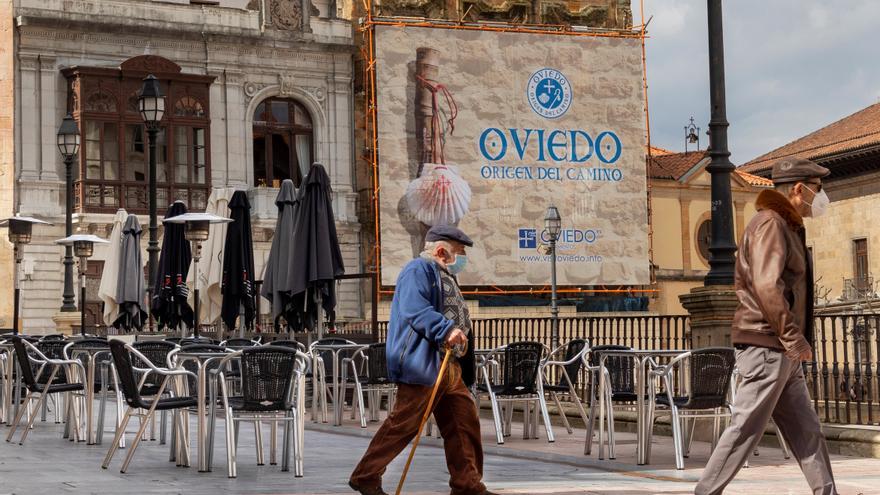 Oviedo has just closed the first weekend of a different San Mateo festival. And it has done so with success and a large influx of people from Oviedo eager to finally celebrate their main holiday without as many restrictions as a year ago. They have allowed it, among other things, the good numbers of COVID-19 in the region, with several days in a row below 20 infections. Still, the massive concerts and outdoor events will have to wait.

Normality seems closer in the Principality, but if something cannot be discussed in this edition of San Mateo, it is normality. And the coronavirus is not the protagonist.

“The festive model and the popular model have been loaded,” says Ana Taboada, councilor for Somos in the Oviedo city council, in reference to the decision of the municipal government (PP and Cs) to establish a new award system of what many they consider “the essence of San Mateo”: the beach bars.

“We have been able to change the festive model by democratizing the festivities of San Mateo”, explains Covadonga Díaz, councilor for Celebrations of the PP, in reference to the raffle of the forty booths distributed throughout the center of the Asturian capital at these festivities in Mateinas.

The traditional beach bars run by social associations linked to political parties have been replaced by new stands established by the City Council run by hoteliers. “They were kidnapped by a few entities,” says the councilor for Celebrations, while various associations speak of “lack of diversity” and “homogenization.” The controversy has passed from the streets to the Town Hall and to social networks, and what seemed untouchable is now history. The new San Mateo has started in Oviedo.

In 1983, the City Council of the capital of Asturias, under the government of the socialist Antonio Masip, decided to import one of the hallmarks of the Bilbao festivities. The famous txosnas Basque (huts) would arrive in Oviedo as a series of beach bars to animate the old town of the Asturian capital every September, in charge of different social and political associations. A San Mateo with music, atmosphere, food, drink and, ultimately, a different product at each stop that was also used as a loudspeaker for the message of each group.

“SOS Racismo, Xunta Pola Defense of the Asturian Language, solidarity committees with Latin America, awareness campaigns, environmentalists … In eleven days of festivities different social entities also had a place in a public space”, explains Ana Taboada, spokesperson for Somos in Oviedo. “In 24 years of Government of the Popular Party, in the city that diverse and plural space had always been respected,” he concludes.

In recent years, hoteliers began to have space in places like Parque San Francisco. Thus the radius of the beach bars was expanded and a stage was created where both models could coexist. However, despite almost four decades of tradition, in recent months a change has been forging that, until the end of August, with the draw for the awards, did not seem real and, since last Friday, with the start of the parties, it already is.

What does the change consist of? The City Council has distributed 40 concessions for three years for the San Mateo festivities, which last 18 days. Of these, 36 are managed by hospitality entities such as Llar de la Catedral, La Cantina de Gascona, Maype or Tierra Artur in areas such as Campo de San Francisco, Plaza Porlier and Truébano Park. In addition, four sites have also been offered in the Plaza de la Catedral for social groups, which have been awarded by lot to the Luar association, the Moza Assembly, the Asturian Movement for Peace and the Colibrís in Action Association.

“That diversity that there used to be and that possibility of choosing, now there is no more,” says Marcos Álvarez, spokesman for the Sograndio Neighborhood Association, one of the first to have one of the positions in San Mateo, since 1983. With this new model, he has run out of place. “The color of the party and joy has been lost a bit,” adds Álvarez.

They have not been the only ones. Establishments such as the Cuban Corner, linked to the Communist Party; La Guinda, linked to the PSOE; the Pinón Folixa, from the Acción en Red associations and the Radio Libre QK, the Aparo chiringuito or the Los Estudiantes beach bar, are no longer part of the Mateina festival. “The chiringuitos had been kidnapped for 38 years by a few entities, several of them linked to left-wing political parties,” explains the Councilor for Celebrations of the Oviedo City Council, Covadonga Díaz, in an interview for elDiario.es. “It was necessary to break that dictatorship by opening the booths to hoteliers, who are the ones who pay taxes and create jobs throughout the year.”

“The Government of PP and Cs has loaded a historical model run by non-profit associations to deliver the centrality of the festivities to Otea, the hotel management of Asturias.” This is what Álvaro Villegas, spokesperson for the Popular Party Platform, believes, created by various social associations that have six spaces in these festivals and one objective: “to guarantee the plurality that the Saint Matthew of a lifetime represents.” In the words of Villegas.

According to the spokesperson for the group, they are not having it easy. “In these first three days, the City Council has used the Local Police to try to repress us and throw us out of our space,” says Villegas after the constant threats of eviction, requests for identifications, proposals for sanctions and warnings, in his opinion, disproportionate. “We are considering legal actions to clarify this use of public force in the city of Oviedo,” concludes the spokesperson for the platform.

The other side of the coin is represented by the happiness of the hoteliers. They are the great beneficiaries of this new distribution by being able to extend their premises to these small 24 m2 stalls during the Mateino period after a very difficult year for the sector. “It is a pride to be able to participate in the festivities of Oviedo”, comments Juan Carlos Martínez, marketing director of the Tierra Astur group, based in one of the booths in Plaza Porlier. “In forty years of history we have never participated in something like this and it is exciting to be able to take part, that people have fun and, little by little, return to normality.”

In the stalls now appear the posters of Las Tablas del Campillín, the pulpería A Feira, Doña Concha or the pizzeria La Competencia, among other new places that will have their site in San Mateo for three years. “People really wanted to party and we have seen it these days,” adds Martínez. “Never before have there been so many festive areas,” says Covadonga Díaz. After a start to a San Mateo with a good influx of visitors in the booths, the hoteliers face the rest of the festive period with optimism and hoping that not even the weather can cloud the desire to celebrate.