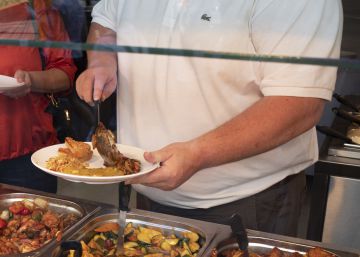 Being overweight is not just a health problem in much of western society. It is also economical, because it overloads health expenditures and affects labor and school productivity and favors social inequality, he warns the Organization for Economic Cooperation and Development (OECD) in a report entitled, precisely, "The heavy burden of obesity."

Having seen that for several years various authorities have been warning about the dangers of overweight and obesity in citizen health and yet many continue to turn a deaf ear to the recommendations, the Paris-based economic agency has decided this year, the tenth since it published its first report on this issue, to emphasize something that does hurt To many: the pocket. And his warning is clear: "Obesity is an alarming burden on individuals, societies and economies of OECD countries and beyond."

Spain, despite its international reputation for the Mediterranean diet, does not get rid of this "burden". More than half of the Spanish population is overweight, The rest of them is 2.6 years old. Although this rate is within the OECD average, Spain exceeds many of the other members of the organization in healthcare expenses. While obesity represents an average burden of 8.4% on health expenses in the OECD, in Spain this figure scales up to 9.7%, being only exceeded by Canada, Germany (11% respectively) and the United States ( 14%) Speaking in silver: overweight reduces Spanish GDP by 2.9%. And to cover those costs, "each citizen in Spain pays an additional 265 euros of taxes per year", also above the average of 181.60 euros of the OECD.

In general terms, more than half of the population is overweight in 34 of the 36 OECD countries, where almost one in four people is obese. A trend that has only increased in recent years, despite repeated warnings: from 2010 to 2016, the average obesity rate among adults has gone from 21% to 24%, which means that 50 million Today, more people are obese, the OECD notes.

In the next three decades, overweight will cost the lives of up to 92 million people, while obesity and diseases related to overweight – cancer, diabetes or heart problems, among others – will reduce life expectancy by almost three years by 2050. And increase health costs: on average in the OECD, overweight It is responsible for 70% of all the costs of diabetes treatment, 23% of the costs to cure cardiovascular diseases and 9% of cancer. In total, treating diseases caused by being overweight costs 423,000 million dollars annually (384,211 million euros) in the OECD.

All this is impacting, and strongly – an average of 3.3% – on the GDP of the countries. Overweight, caused by an increasingly sedentary life and a parallel increase of almost 20% in calorie intake, increases work absenteeism and reduces productivity.

Adults with at least one chronic disease associated with being overweight are 8% less likely to be employed the following year. And when they have a job, the probability of being absent or less productive is 3.4% higher than those who are not overweight.

This problem also causes greater social inequality. In the European Union alone, 90% of women and 50% of men on the lowest income scale are more likely to be obese than those with higher salaries.

A social inequality that often begins in school: Overweight children usually have lower school performance and greater absenteeism, which reduces their chances of completing a higher education. This in turn condemns them to the lower income scale when they enter the labor market. They also declare less satisfaction for their lives and are three times more likely to be victims of bullying, which in turn can also contribute to lower performance, says the OECD. On the contrary, children with a healthy weight are 13% more likely to get good results than their peers with obesity.

Solutions exist, and good results can be obtained not only to reduce citizen obesity, but also to improve the coffers of the State. Only in Spain, each euro invested in reducing overweight achieves a return of up to six euros in economic benefits.

The OECD report proposes for the Spanish case what it calls a “combined package” that includes menu labeling, medical prescription of physical activity and wellness programs in the workplace. All of this, he says, could prevent up to 96,000 noncommunicable diseases until 2050, save 32 million euros in healthcare costs and increase employment and productivity "in an amount equivalent to 4,000 full-time workers per year."

If it was also possible to implement a 20% caloric reduction in foods high in sugar, salt, calories and saturated fat, 472,000 noncommunicable diseases would be prevented until 2050 and 169 million euros a year in health costs would be saved. It would also increase employment and productivity "in an amount equivalent to 13,000 full-time workers per year."

With one in three obese adults, Mexico is among the countries with the highest obesity rate. Which impacts on your health: it is the OECD country with a greater reduction in life expectancy, up to 4.2 years, due to being overweight. A burden also for the economy, where overweight represents 8.9% of health spending and reduces its GDP by 5.3%. Which is "the greatest impact registered among the countries analyzed," the agency underlines in its report.

The “combined package” recommended by the OECD – menu labeling, medical prescription of physical activity and wellness programs in the workplace – could prevent up to 290,000 noncommunicable diseases in Mexico until 2050, saving 465 million Mexican pesos (21.6 million euros) in health expenses and increase employment and productivity "in an amount equivalent to 16,000 full-time workers per year."

If it were also possible to implement a 20% caloric reduction in foods high in sugar, salt, calories and saturated fats, 1.4 million non-communicable diseases would be prevented until 2050 and 1.990 million pesos would be saved (92.5 million euros) per year in health costs. It would also increase employment and productivity "in an amount equivalent to 71,000 full-time workers per year."