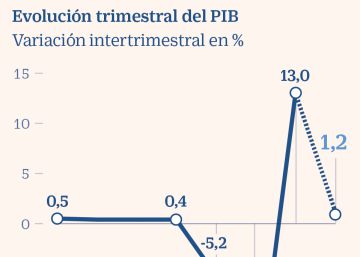 The Spanish economy faces a complex and uncertain autumn in which the coronavirus pandemic threatens to return to negative territory the incipient growth achieved in summer after the paralysis of activity that imposed the lockdown during the spring. The growing outbreaks of Covid-19, together with the new restrictions approved in response, among which the recent declaration of the state of alarm over the Community of Madrid, the country’s first regional economy, puts at risk a quarterly increase in GDP that the The government itself estimates around a fragile 1%.

Although the Executive has not publicly provided this calculation, the figure can be obtained by applying the quarterly weighting model with which the Bank of Spain calculates annual variations in GDP. Thus, after the confirmation of the National Institute of Statistics that the GDP yielded 5.2% in the first quarter of the year and 17.8% in the second, taking the official forecast announced last week by the Vice President of Economic Affairs , Nadia Calviño, that the economy rebounded 13% in the third quarter and that the expected fall for the year as a whole will be 11.2%, it can be estimated that the Executive projects an increase of between 1.1% and 1.4% in the quarter. The calculation returns 1.2% as the intermediate point.

Keep in mind that these are quarter-on-quarter rates of change. In other words, while the third quarter achieves an upward trend comfortably situated in the double digits because it is compared with a spring of unprecedented economic paralysis, the fourth quarter of the year is confronted with that summer of reactivation and tourist campaign that, due to limited Whatever it was, now requires a greater effort from national demand to settle the quarter at positive rates.

From the Ministry of Economy they limit themselves to confirming that their projection is in line with those published by analysts. From Funcas, the foundation of savings banks, where they expect a GDP advance of 1.6% in the fourth quarter of the year, they admit that growth is so weak and threats are so growing, that “there is a risk that GDP it went negative in the last quarter ”. This is recognized by Raymond Torres, Funcas’ business director, who points to two key factors. On the one hand, “the outbreaks themselves, and their impact on mobility and tourism”, as well as “on trust and, as a consequence, on consumption and investment, especially in private consumption that weighs heavily on GDP. , given the risk of job loss, etc “. On the other hand, he adds, there is “the reaction to those sprouts.” “Doing nothing would greatly aggravate the outlook and jeopardize the low growth of the fourth quarter,” he argues, qualifying that, on the other hand, “if the reaction is a total closure of the economy, a new generalized confinement, or that of large territories like Madrid, which represent an important part of GDP, this would also have an immediate negative impact ”.

As a middle way, Funcas advocates taking surgical measures but early. Otherwise, they state, the inheritance of the first wave of the pandemic could give way to “an accumulation of insolvencies of companies that could generate losses, not only of employment, but also of the banking entities”, increasing the risk that the crisis also has financial overtones.

The signs that GDP could decline again in the final stretch of the year have started to pile up. Only in recent days, the Sociological Research Center (CIS) announced that consumer confidence has fallen to the minimum levels reached in the financial crises of 2008 and the sovereign crisis of 2012.

In parallel, private activity has suffered the biggest drop in activity in the last four months due to the worsening of the services sector, according to the composite PMI index, leaving Spain at the bottom of the euro area. “Due to increasing job destruction, profit margins under pressure, and the possibility of increasing restrictions to prevent further spread of Covid-19, the risk of the so-called double drop it’s increasing, ”warned Paul Smith, an economist at IHS Markit, which produces the PMI.

“Nothing can be ruled out,” warns Rafael Doménech, head of economic analysis at BBVA Research, who agrees that “a slowdown” in the economic recovery is noticeable, but rules out, a priori, that the fourth quarter is heading to close in negative. Everything will depend, he assumes, on the hardness, duration and depth of the new restrictions that are imposed during the rest of the fall.

From there, Torres and Doménech coincide in pointing out that the end of the year will be key to seeing the tone with which 2021 starts, from which all analysts expect a strong rebound in the economy spurred by European aid, but whose vigor it will depend on the starting point.

Consumption. One of the factors that will decide the sign of GDP in the last quarter will be the uncertain Christmas season this year. “If it is presented with restriction measures in meetings, mobility will have a certain impact,” says Raymond Torres, Funcas’ business director, who assumes that “the economy is going to slow down, but less than in generalized confinement.” “The Christmas campaign has its importance” in the economic sphere, underlines Rafael Doménech, head of economic analysis at BBVA Research, who believes that the fall in traditional spending on those dates may give way to another. “They are changes in habits, as we see with teleworking, many activities that we did before in offices and that fed all the activity in the area, such as restaurants, have been taken to homes. Something similar may happen at Christmas and more is spent on food at home, equipment, etc. ”, he illustrates. “It will be spent on different things, such as electronic commerce,” adds Torres. In any case, both point out that, beyond the type of consumption that the current limitations allow, the key will be to see if the climate of confidence in the economic and labor future helps to release the accumulated savings in the pandemic.