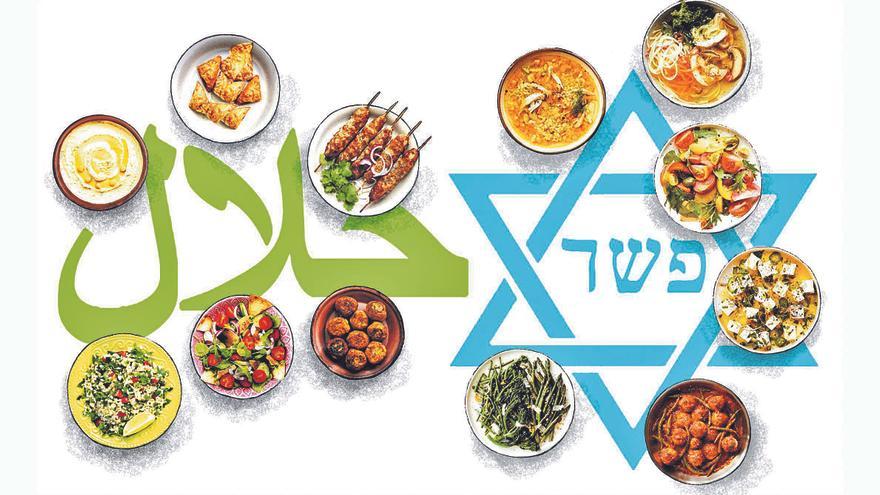 The kitchen in Judaism, not only that of the great celebrations, is governed by rituals, starting with its strict food regulations. Kashrout combines dietary laws; It encompasses a set of prescriptions based on Divine Law, the Bible, and the Talmud. Kosher means fit for use. Eating food chosen, prepared and combined according to its rules is synonymous with quality, purity, and health of the body and soul. In the same way that halal, for Muslims, is equivalent to what the sharia (Islamic law) allows to eat. The Indian diet also has its desirable and undesirable practices. These three regulatory tables coincide, at least, on one thing: the pig is an impure animal forbidden to consume, if you want to find a meeting point between Jews, Muslims and Hindus, there you have it. The aversion to the pig is unanimous. The latter, as you already know, do not eat cows either because they are considered sacred.

In kosher cooking, the calf should not be cooked in its mother’s milk, according to a passage from Deuteronomy. That is why it is necessary to separate certain foods, including dairy and meat. The latter must be bled during slaughter. Only those animals that are ruminants and have the hoof split in two will be eaten. Therefore, the pig, which does have a split hoof but is not a ruminant, or the rabbit, which is a ruminant but does not have a split hoof, like the camel, are impure. Fish with fins and scales can be eaten, but shellfish cannot: no lobsters, prawns, oysters or clams. Judaism is aware of the irrationality of not eating, for example, pork. But he also understands that sometimes we do irrational things to satisfy loved ones. In this case to God. Are all commandments (mitzvot) divine whims without rational explanation? No. The precepts of the Torah fall into three categories: mishpatim (rational laws), do not murder, do not steal, honor parents, and so on; edot (testimonial laws), Shabbat, Passover, Tefillin and others; finally there are the jukim (irrational statutes), which includes the prohibition of eating pork or cooking meat with milk.

The Qur’an weaves an equally intricate skein by allowing Muslims to eat only that which is “pure, clean, nutritious and pleasant.” At the same time it prohibits what it considers impure, dirty, insubstantial and disagreeable. For example, an animal improperly euthanized (strangulation or brute force) or already dead; in other words, it has perished without the ultimate goal being to eat it. An animal that has not been killed in the name of Allah; in that sense it is invoked in sacrifices. The Jews, on the other hand, consider it unnecessary to mention God in this kind of thing. Islamic food laws also prohibit blood, the consumption of carnivorous and terrestrial animals without external ears, and birds of prey. The same happens with alcoholic beverages. And, of course, the pig. Kosher wine, on the other hand, is available to any practicing Jew.

Both Judaism and Islam are Abrahamic beliefs. Born in the Middle East, they are united by faith in God as revealed in the Hebrew Bible. Their dietary laws are part of an intricate code of Christian conduct. Devout Jews and Muslims consider the dietary rules that shaped the kitchens of both communities for thousands of years to be essential. Over the centuries, the followers of these doctrines have pushed the culinary limits and yet remain faithful to them. Both religions have also faced the challenge presented by the world of processed foods. Kosher and halal have become extensions of their cultural identities.

Dietary Hinduism leads to an even higher mystique. In any case, it recommends and suggests more than it disavows. The prohibition itself concerns exclusively the impure pig and the sacred cow, although milk and dairy are accepted. Believing in the interconnectedness of mind, body, and spirit, Hindus prefer food that they themselves consider does not impede physical or spiritual growth. So there are undesirable (tamasic) foods; medium beneficial (striped) and totally harmonious (sautic). Among the former, causing anger, greed and other negative feelings, are meat, onions, alcohol and any type of fermented food. In the second section, beneficial although they can cause restlessness or overstimulation are foods that are too hot, salty or spicy, bitter or sour, chocolate, eggs, coffee, tea and processed foods. The preferred foods capable of balancing the body and purifying the mind are, to cite a few examples, cereals, nuts, vegetables, milk, cheese and clarified butter (ghee).

Let the Catholic observer of the religious norm now turn to thinking about the cod and chickpeas of the vigil of Holy Week. You will see how relieved you are.