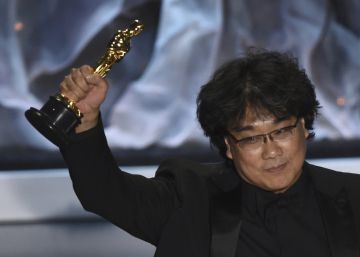 A South Korean film released in the United States with subtitles two months ago has made Hollywood history this Sunday as the first film in non-English language to win the Oscar for best film. Parasites, by Bong Joon-ho, is the film of the year. Rarely that title is so justified in terms of quality, impact on the world conversation about cinema and, finally, industry recognition. The triumph of Parasites in the 92nd edition of the Oscars (he has also won best address, original script and best international film) will mark a before and after in the history of this ceremony, in an unstoppable process of international penetration in Hollywood.

Parasites It has premiered in more than 1,000 cinemas in the United States, has made more than $ 30 million at the box office alone in this country and has the honor of having embarrassed monumental productions with a Korean and Korean history. Only 11 titles in history have been nominated at the same time as the best foreign film and as the best film. None had succeeded. Parasites took that final step that he missed it last year to Romeby Alfonso Cuarón, when the industry was left with the feeling that the best film of the year had not been awarded.

Parasites it is also imposed in a year in which Quentin Tarantino presented Once upon a time in ... Hollywood, one of his best films and a love letter to this city; Martin Scorsese, the Irish, a work that summarizes everything the Scorsese public expects; Todd Philips, Joker, a new angle of cinema based on very impressive comic characters; and Sam Mendes, 1917, a war drama with a lot of visual impact He had taken all the awards so far.

Five years ago, the Hollywood Film Academy set out to make its body of voters more international. Since then, about 1,500 new members who are not Americans have entered. "Be careful with that," Antonio Banderas told reporters on Saturday. "Voting begins to open in an incredible way." Banderas highlighted the number of international films that had been cast in the nominations. “They are expanding because they want to turn the Oscars into world awards. That is happening faster than people think. ” Only 24 hours later Banderas warning materialized on the Oscar stage.

The three Spanish options (Pain and glory, by Pedro Almodóvar for best international film; Antonio Banderas to lead actor for the same film and Klaus, Sergio Pablos, for best animated film) ran out of prize.

Shock at the Dolby Theater

When director Bong went up to pick up the award for the best international film, the ovation at the Dolby Theater overcame the sound of the broadcast and made it clear which movie is the most surprised to Hollywood. It was the second Oscar in history for South Korea. The first had been the best original script. The third was the best direction. The fourth, best movie.

Bong Joon-ho was visibly excited on stage when they gave the award to the best director. "After the prize for the best international film, I thought I had finished the night and was about to relax," he said. He then gave the exact measure of the relevance of what had just happened. "When I was at school I studied Martin Scorsese's films," he said, pointing to the director of the Irish, who was sitting in front of him. Scorsese is the live director with the most nominations, nine. The other contestants were Quentin Tarantino, Todd Phillips and Sam Mendes. "I'm going to drink until tomorrow," Bong said. Eight of the 10 awarded to the best director in this decade that closes are not Americans.

The hopes that Parasites Surprise, not from the night, but from the decade, they began touring the Dolby theater very soon. The fourth and fifth prizes were both script. A commotion toured the Dolby theater when Parasites he won the original script award beating Story of a marriage, 1917, Once upon a time in ... Hollywood Y Daggers in the back (Knives out). A few minutes later, Taika Waititi climbed to pick up the first prize of her career for the script adapted from Jojo Rabbit. I had won The Irish, Joker, Little Women Y The two potatoes.

If there are some categories that usually carry the weight of glamor and emotion in these awards are the interpretation. However, the same four names have been repeated in all Hollywood awards galas in the last month. The amazing transformations of Joaquin Phoenix in Joker and Renée Zellwegger in Judy the main awards were taken. Brad Pitt and Laura Dern, two of the most beloved actors in Hollywood and who had never received an Oscar, were awarded by Once upon a time in ... Hollywood and Story of a marriage.

Of the four, only Phoenix felt compelled to make a great political speech in which he mixed all the causes, from veganism to climate change, under the general concept of injustice. Dern and Zellwegger dedicated it to their heroes (in the case of Dern, his parents, both actors with nominations as well). Brad Pitt made the only political reference of the night: “I have 45 seconds. That is more than what the Senate has given John Bolton. ” Inside the press room, he was asked why something so specific. “You have to be very serious about this. You can't pass up. ”

In the technical sections, the production design was for Once upon a time in ... Hollywood and his recreation of Los Angeles in 1969, which functions as a time machine. Afterwards, the best costumes went to Little Women (The Academy is reputed to always reward large skirts). One hour of ceremony and zero tracks. The rest of the awards called technicians were distributed among 1917 Y Le Mans' 66. The most celebrated, the second Oscar de Roger Deakins, cinematographer of 1917 Nominated 15 times in his entire career. No other prize was so clear. In numbers, and only in numbers, 1917 He went ahead with the prize for the best visual effects. It was different there. There was not the favorite.

An elephant in the room

For a gala without a presenter, there were good presenters. From Diane Keaton and Keanu Reeves to Maya Rudolph and Kirsten Wiig, the Academy set up a Show agile and with fair laughs who also had some hard-to-justify musical number left over. Janelle Monáe, a black and gay woman, inaugurated the ceremony by dressing up the most classic character of this ceremony, Mr. Rogers of Tom Hanks. She did in initial musical number reviewing the year in movies. Afterwards, Dean Martin and Chris Rock had five minutes of comic presentation for themselves. "We've both presented the Oscars before, this is an incredible degradation," joked Martin.

As Chris Rock did at the 2016 Oscars, the comic number of both served to point out the elephants in the theater in this edition. For example, the practical absence of nominees of color among the 20 actors of the night. "In the first Oscars in 1928 there was no black nominee," Martin said. “And in 2020 we have one. Great progress, ”said Rock. "I think something is missing from the list of nominees" for best director, Martin said. "Vaginas?" Rock replied. There, problems solved. To enjoy.

The Academy had promised that this year there would be special musical performances within the gala. Music at the Oscars is usually centered around the five nominated songs. The reality is that it is a show that does not usually leave memorable performances to which you can return on YouTube, a virtue in which the Grammy awards are the masters.

This year's effort in the music section had its award at various times during the gala. The musical sensation of the year, Billie Eilish, performed Yesterday during the segment in memoriam. Eminem went out to perform live 8 mile, the song of the movie that starred in 2002 and for which he won the Oscar. Idina Menzel sang Into the Unkonwn, the song of Frozen II, along with the voices of Princess Elsa worldwide, a boast of Disney's global power. Elton John personally sang at the piano I'm going to love me again, from the biopic about his life Rocketman. Elton John and Bernie Taupin, who have been composing together for 53 years, took the stage to collect the prize for the best song. It was the second Oscar for John and the first for Taupin, who said: "Well, this has not been disgusting."