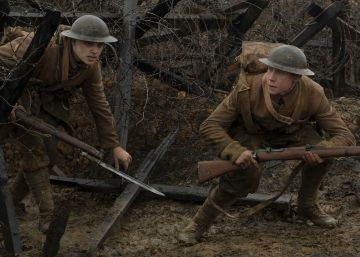 The First World War It was going to last a short time and became a long fight with about 18 million dead and consequences that marked the twentieth century. The reading that she offers 1917, from Sam Mendes, one of the strongest candidates to be made Sunday with the statuette for the best film at the Oscars, makes several mistakes that seemed overcome in recent cinema. And that inevitably causes the proposal to lose interest.

Among those failures there is a return to a Manichaeism overcome decades ago, when it seemed that we had already abandoned the evil and dumb Germans and good, smart and handsome allies. That lack of depth extends to the null reflection that history raises about the war itself. Nor do critics slip in command.

The alibi of the supposed perfect show has served many to exalt 1917 The mantra of "the film is very well done" is one of the most repeated, when the least that can be asked in 2020 for a film is that.

Also disturbing is the alteration of historical military reality. Mendes is shielded in that his grandfather did something similar to what appears in the film or told him something similar. However, the heads of unit did not walk in the front as it appears here in the figure of the stretched colonel interpreted by Benedict Cumberbatch. The unit commanders were in castles and villages away from the misery of the soldiers, and comfortably dispatched from there. Many of them slept in beds with clean sheets, but it seems that this detail does not interest Mendes. It was precisely in the wake of this war and to see how much of the officers did not step on the front when the concept of command changed. Since the Rif War and World War II, the officers went ahead, with the troops, and many fell.

The military aspect is not reflected on the screen, but is committed to an action closer to that experienced by a passive video game player. Most of the soldiers who went to the Great War were illiterate and quite young. The usual thing was that they defecate themselves in their uniforms for fear before entering combat. In 1917 that terror is not shown, but it is committed to take out a lot of rats and an army of "bad" Germans who can not call "Nazis" because they did not exist yet.

And Mendes does not tell what happened in the battle of the Somme, when within a few hours there were more than 8,000 Englishmen killed by British military incompetence, similar to that which occurred in Balaclava or Gallipoli.

In 1917 there is no narrative rhythm, as in Objective: Burma; there is no accurate portrait of different styles of command, as in Whiskey and glory; there is no sense of defeat or triumph, as in The bridge over the river Kwai. Comparison with Wings, by William A. Wellman, or with The best years of our lifetime, of William Wyler, leaves far behind 1917. About World War I they are much better Paths of Glory or No news at the front.

José Manuel Fernández López is colonel of the Army of Earth. Just edited With the boots on (Edaf) and is the author of Dictionary of war movies (T&B).