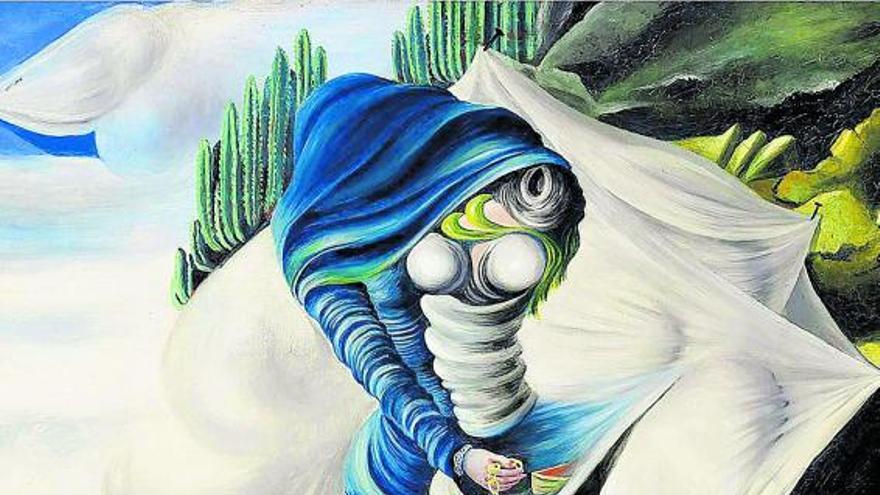 In 1933, the Canarian poet, writer and surrealist Domingo López Torres – imprisoned in Fyffes prison and later executed – announced with irrepressible emotion the appearance of a new artistic talent, whose daring compositions had surprised at the exhibition that had been held at the Círculo de Bellas Artes in Santa Cruz de Tenerife that year, organized by the art gazette. In 1928 he had exhibited in the same society together with the French painter Lily Guetta, but that was his first solo show, already fully surreal, although at that time he was not part of the group.

“Through the murky waters of the psyche, navigating between high sexual complexes –the door ajar to Freudian theory– comes Óscar Domínguez, a young surrealist painter and one of the most promising stars of this island”, López Torres praised the artist . And he highlighted from that exhibition how “he achieves unexpected shades and transparencies. From the darkest corners, the boldest shapes are prodigiously assembled. Secular forms deformed by an exuberant fantasy. Elongated figures; shady shapes ”. About the paintings of that young man, he pointed out; “They are silent, cold, like a leaf on the viewer’s chest”, as collected in the publication Óscar Domínguez Antológica, 1926-1957.

In 1933, Domínguez inaugurated his first solo exhibition in which he showed fifteen fully surrealist paintings of subjective and free inspiration, where the juxtaposition of dislocated, arbitrary and unexpected images presents this new way of understanding reality, seeking its most hidden and dreamlike meaning. . The Souvenir de Paris, The levels of desire or the study for Self-portrait stand out, in which a certain relationship with Dalinian work is perceived, but, as Westerdahl says in his chronicle, “Óscar departs from the perfect objective construction, of the forms real by Salvador Dalí. Dalí loves shapes. Oscar is more into the dream ”,

Painted just four years later, the painting titled Madamme illustrates the unique creative drive of Óscar Domínguez’s art at the height of his involvement in the Surrealist movement, showing the unique blend of association, dreams and mysterious images that characterized his work. Although in 1932 he had settled in Paris, since 1929 he had been working on his surrealist vein. But it would not be until 1934 when Domínguez personally met André Breton, the great theorist of surrealism, and with him the circle of artists, poets and writers that surrounded him, who, attracted by the inventiveness and enigmatic imagery of Domínguez, impregnated with memories, colors and shapes of his native Tenerife, embraced the arrival of that young island talent, incorporating several of his works in the first exhibitions hanging abroad. Thus, he quickly became a key player in the movement, as a member of an important new generation of artists that André Breton believed could help revitalize surrealism at a time when it was in danger of losing momentum.

Nicknamed le Dragonnier des Canaries (the dragon of the Canary Islands) by his new colleagues, Domínguez brought a powerful figure to the group, consolidated after the development of the automatic painting technique, known as decalcomanía. Surrealist colleagues welcomed this original technique, believing that it was capable of transferring the basic principles of automatic writing to the pictorial process, introducing the random and the unconscious in their compositions.

Óscar Domínguez, in turn, became fully involved with that movement, participating with fiery enthusiasm in its discussions and debates, and even organizing an exhibition of surrealist painting in his native land, on the island of Tenerife.

In Madamme, two female characters with amorphous lines intertwine in a mysterious dance, with their elegant statuary bodies appearing at once solid and liquid, stationary and fluid, mingling with each other as they merge into an embrace. Using the billowing stripes of fabric to emphasize the fluid materiality of her forms, Domínguez allows the deep blue colors worn by the woman on the left to bleed into the folds of the white fabric that wraps around the other figure’s waist, thus creating the impression that they are experiencing a process of physical fusion. Visually, these two central figures echo the artist’s designs for one of the female mannequins included in the 1938 InteRnatiOnale du Surréalisme (EROS) Exhibition, held at the Galérie Beaux-Arts in Paris, where a series of provocative mannequins, dressed as erotic objects by different artists of the group. In Domínguez’s version, the mannequin remained naked, save for a strange metallic headdress, a row of ringed bracelets, or a rope tightly wound along the length of an arm, plus a sheer cloth that sprouted from a siphon standing alongside to her.

In oil, the viscous and intermediate nature of the women’s forms becomes really strange. The white figure seems to be rooted as one more element of the landscape, with its small black nails fixed on the rocky surroundings; one of them even draws blood while piercing his body with the sharp end. In the sky, a cloud remains equally anchored, static, suggesting that different parts of the composition are in danger of dissolving before our eyes, rapidly sliding from the limits of the canvas into another realm.

The surrounding landscape, on the other hand, seems solid and exudes a monumental air: stratified rock formations, the singular nature of an endemism such as cardones and the ocean, open and undulating, reminiscent of the unique geography of the island of Tenerife. Although the dreamlike quality of the composition, and in particular the fluid bodies of the female characters, suggest the influence on the artist of the work of the great Salvador Dalí, it is in the changing sense of materiality and space that Madamme traps the Domínguez’s thought at that time, when he began to explore a new path that, the following year, would lead him to the development of a new stage: his cosmic landscapes.

The philologist and professor of Art History José Carlos Guerra Cabrera, author of the recently published monograph on the artist, entitled Óscar Domínguez: Work, Context and Tragedy, highlights those features of island dreams present in this small pictorial jewel. “In the image of an endemism like the euphorbia canariensis, the cardón, also in those blues of the sea and the clouds”. The scholar recalls that the work Madamme is dated 1937, when the artist had already lived in Paris for five years, after having left the Canary Islands, and after a brief stay in Barcelona. “The nostalgia for the landscapes of Tacoronte and those unforgettable sunsets on the beach of Guayonje are evident in this canvas”, which he considers wonderful. Óscar Domínguez does not hesitate to describe him as “the most universal Canarian painter”, being together with Manolo Millares one of the only ones who have work in two great temples of art, such as the MoMA and the Pompidou Center, and in the case of Tenerife, also with three pieces at The Getty Research Foundation, in Los Angeles (California). The historian claims that his figure “must be a permanent flag”, as well as the important collection housed in the TEA funds, “which must become a permanent collection.”

The TEA curator Isidro Hernández also stops to underline the importance and magnitude of this Madamme in the vital pulse of an artist of the stature of Óscar Domínguez. “It is not only important because it is one of the works that reflects the great influence of Canarian nature in his painting, but because it represents the transition towards gestural automatism”, points out the specialist, who warns of that spiral inertia “that goes to take it to the development of cosmic painting at the end of the 30s of the last century ”, he reflects.