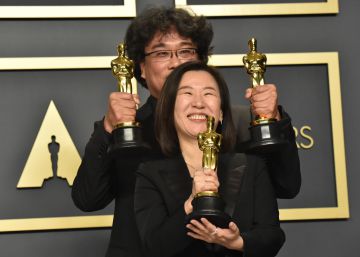 Neither Brad Pitt, nor Renée Zellweger, not even Elton John and Bernie Taupin. When South Korean director Bong Joon-ho He entered the press room of the Oscar ceremony, the journalists stood up to cheer him. In front of the microphone, with two statuettes in his hands, the man who has made history in Hollywood was about to speak win the top prize with a non-English speaking movie, Parasites. Bong, who has done his entire promotion in Hollywood speaking in Korean and accompanied by a translator, only said four words in English: “This is fucking crazy!" That's. A fucking madness.

Bong began by saying that he had done nothing special about his previous films. “We have done the usual with this movie. It seems all surreal. I think something is going to hit my head and I'm going to wake up from this dream. ” Bong usually gives answers that seem longer than his translator then says. Same as subtitles. If the posters have not been an impediment for more than 30 million Americans and more than 160 million worldwide have gone to the cinema to see Parasites, the translation did not detract from the interest of the entire world press (309 media) gathered in the 92 edition of the Oscars.

They asked him what the universal qualities this movie has. "My previous film was a South Korean and North American co-production, but this one is purely South Korean, which makes me think that perhaps the story gets bigger and connects better with the international audience the deeper I get into my surroundings," he said. Bong

Before the press, Bong repeated the tribute to Martin Scorsese he had done on the stage of the Dolby Theater by winning the Oscar for his childhood Oscar for best director. Scorsese is the live director with the most nominations, nine, and has only won one. “I have seen Scorsese lose this award many times. He didn't know me then, but I was very frustrated. I remember the emotion when he won by Infiltrates. Being nominated with him was a huge honor. It's hard to believe".

These Oscars will mark a before and after in the acceptance of films with subtitles in the North American market, which is as powerful and productive as it is closed to the cinema that is not shot in English. Bong's speech at the Golden Globes was very celebrated. There he said that the Americans had to "overcome subtitles, which are a one-inch high barrier" to discover much more cinema. In the Oscars he delved into his analysis of that phenomenon. “When I said about the one inch barrier it was already late. People is overcoming these barriers thanks to services streaming, YouTube and social networks. I think we live an environment in which we are all connected. So there will come a day when it will not be so important if a movie is in a foreign language or not. Hopefully at some point stop being a subject [relevante]"

Parasites It is produced by a woman, Kwak Sin-ae, and is the first South Korean film nominated for an Oscar. With the statuette in hand, Kwak said that "just winning a prize would have been a great party, but having won four out of six I can't imagine how the atmosphere is right now in South Korea." Winning the prize for the best production of the year over all of Hollywood "means that this film has been voted by the members of the Academy, and I realize that that means the beginning of a change in international cinema, not only for South Korea. ”