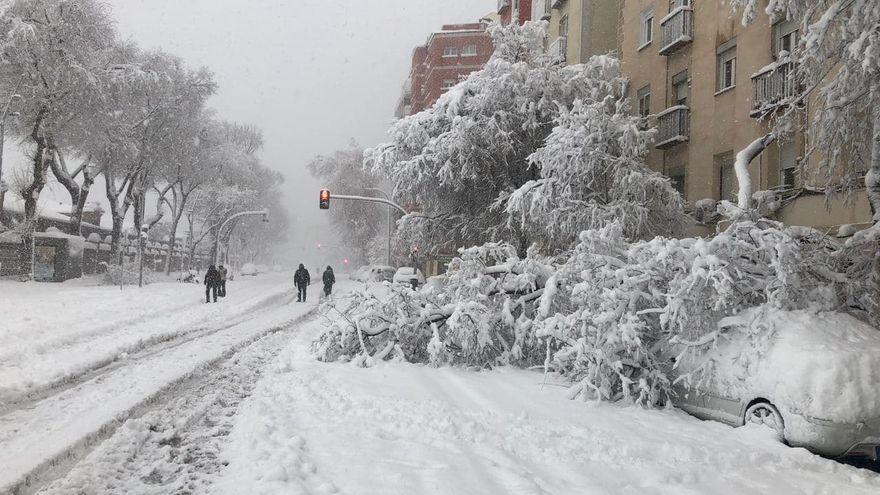 The non-governmental organizations Acción en Red, AIRES, Granito a Granito, Solidarios para el Desarrollo, Plaza Solidaria, Proyecto Encuentro Acoge, SCI Madrid, Hogar Sí, Asociación Moradas and Asociación Bokatas, with the support of the Madrid Network to fight poverty and social exclusion, they have issued a statement denouncing the lack of coordination of the Madrid institutions to attend to the homeless in Madrid in the days before and during the storm.

In the letter they point out “the reluctance of the Administration to have our help and support from the first moment” and underline “the lack of foresight regarding a situation that, although it exceeded forecasts, was announced in sufficient time to look for more accommodation alternatives. dignified and safe than the Madrid metro facilities ”, where the City Council decided to house the homeless.

“Filomena was not an earthquake or a nuclear catastrophe, both unforeseeable. It was a clearly announced and predicted storm ”, denounces Enrique Cuesta, spokesperson for Acción en Red, in conversation with elDiario.es. “The lack of foresight has been clear, it is not justifiable and requires an explanation from the Madrid authorities,” says Ania Pérez, from the AIRES association, which works with women. “They must give an explanation for political responsibility and respect for the homeless and the entities that work with them,” he adds.

No reinforcement of personnel

“There has been incoordination, improvisation and a terrible final lesson. Let me explain: during the previous week it was known that extraordinary places would be set up to house homeless people, but neither the personnel nor the equipment was reinforced, nor was the logistics nor the transportation of the people evaluated, ”says Jesús Sandín, from Solidarity for Development. “When Filomena arrived, although there were places, people could not move to them unless they did it by their own means, because they did not have professionals or mobile units for it,” he adds.

Several entities that usually work in the care of homeless people indicate that they offered the Madrid City Council their collaboration in the week before the storm, but that they did not obtain more than generalities in response. “We sent volunteers to look for people to inform them where they could go, to make sure they had the means of subsistence, because there was no municipal team to do that work. We were not asked to do it from the City Council, it was up to us to do it and offer it, despite the fact that we had already raised it before, ”says Santín.

“It was known that it was going to happen and the only answer was to wait and see if it happened,” laments Enrique Cuesta, the spokesperson for Acción en Red, from where it is criticized that the City Council only offered four subway stations for the homeless in full storm.

“In 2003 the subway was no longer used as an accommodation space for the homeless, returning to that is a step back and even more so when there are hotels, hostels and pensions that are not in use due to COVID-19. Needs were not taken into account and the lives of these people were not considered as a priority ”, he adds.

“We offered our collaboration previously, we were told that we would already be informed, that we would see how it would be resolved. In practice, when they counted on us it was because we had already left of our own accord, “they point out from Solidarios para el Desarrollo. “What the City Council did was to add the initiatives that came from the entities, instead of being productive and leading the process. That lack of leadership is worrying. ”

“On the Saturday of the heavy snow we offered the City Council our collaboration to bring blankets, drinks and clothes to homeless people who could have reached the indicated metro stations. They told us no. After a while they changed their minds and said yes. At 9:00 p.m. we entered the Ópera metro station and there was only one volunteer from the City Council, with good will but without training or knowledge of what is going to happen. There was also no one from Samur Social and the subway workers were not informed that they had to let the homeless people who arrived. The improvisation was total, ”he continues.

In the statement, the ten signatory entities, with the support of the Madrid Network for the Fight Against Poverty and Social Exclusion, indicate that the lack of foresight and lack of coordination on the part of the Administration were not accidental, “but that it responds to an order priorities that have become clear, and the historical deficiencies of the emergency care model in Madrid ”.

“Requesting that the volunteers respond as they did, coming with their own means long before nightfall to the stations, and that the arrangement provided was clearly insufficient, requires clear explanations and political responsibilities. This will make it possible to take real measures for the real improvement of the assistance model, and to guarantee the means available to the technical bodies, which ensure adequate and dignified attention to people whose vulnerability in any emergency of this type is much greater than that of the rest ”, they point out in the writing.

They also recall that the ultimate goal should be that no one sleeps on the street, and that for this, active and preventive policies are needed, “not unworthy patches”. “This situation would not have happened if homeless people had what they need: a home. And having empty houses, as is available in Madrid, we demand, once again, that the necessary means be put in place to eradicate the homelessness. We cannot leave anyone behind ”, they finish.

“In these days we have been in contact with all entities, sharing information and asking ourselves for the response of the City Council. We have shared frustration with this response, which has not really been an answer ”, they point out from the AIRES association. “We work for people who usually do not have a loudspeaker to tell what happens and we understand that sometimes it is our obligation to tell it”, underlines its spokesperson, Ania Pérez, who adds:

“We must not forget that the street kills. It kills with cold but also with heat, or with rain. Sometimes it seems that it is perceived as a problem only in winter, but it is a scourge that can only be solved through the House” .

“Our disposition is to collaborate with the City Council and with social services as far as possible, to continue doing so, but that does not imply not telling what we saw,” they indicate from several signatory entities. All of them emphasize their willingness to underline the good work done by the Samur Social staff who, despite not having sufficient resources, “have tried to do everything they could.”