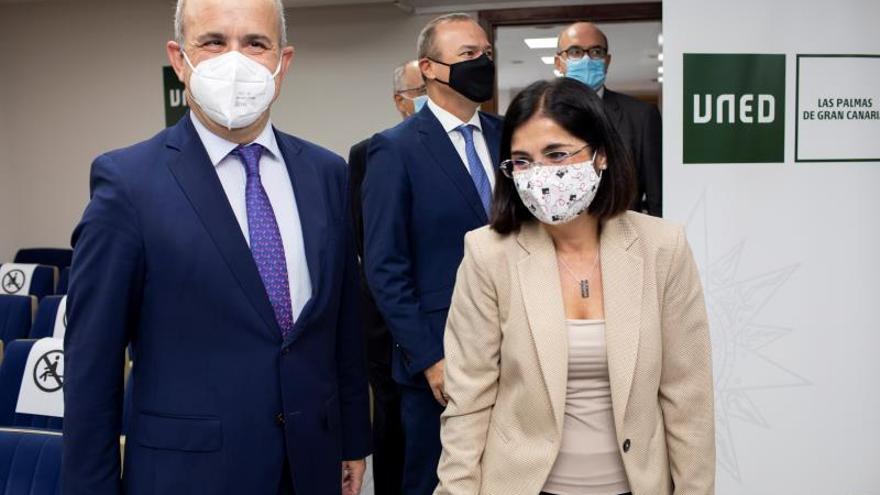 The Minister of Territorial Policy and Public Function, Carolina Darias, presented this Saturday the Decentralization Plan for Selective Processes in the General State Administration, which makes it possible for the same opposition can be held in different parts of the country through the UNED centers, thus avoiding the displacements of the opponents.

The minister highlighted the importance of facilitating access to institutions and, specifically, to the General State Administration, with innovative measures, driving digital administration and making its transformation and modernization a lever policy for the country’s development plans.

“Never until now has the Administration been a lever policy. Now we are and with a special motivation because this Government of progress wants equal opportunities for all,” said Darias during the presentation, which was held from the Associated Center to the UNED of Las Palmas de Gran Canaria.

The minister has stressed that for the first time in the history of this country the entrance exams to the AGE can be carried out from any city through the centers of the UNED. He has also assured that by equalizing opportunities “we improve the lives of citizens, we ensure the lives of the people and the access to the public is to give people opportunities “. “Today politics is reunited with good politics and comforts politics that think of people and give people opportunities,” added Carolina Darias.

The event was also attended by the rector of the UNED, Ricardo Mairal Usón; the mayor of Las Palmas de Gran Canaria, Augusto Hidalgo; the Secretary of State for Territorial Policy and Public Function, Francisco Hernández Spínola; the Government delegate in the Autonomous Community, Anselmo Pestana, and the director of the Center Associated with the UNED in Las Palmas de Gran Canaria, Juan José Rodríguez Guerra.

With the experience of this Saturday, decentralized selection processes have been launched in the General Administration of the State (AGE) with the exams for the Superior Body of Civil Administrators of the State from 23 centers distributed throughout the national territory.

As the minister herself recalled, this initiative arose three months ago, through the agreement signed between the Ministry of Territorial Policy and Public Function and the UNED on July 2.

Along the same lines, the minister stressed that the measure is “an initiative resulting from alliances”, in line with the Sustainable Development Goals (SDG) of the 2030 Agenda, as well as the collaboration of the UNED and the Government of Spain.

“We are convinced that together we go further, that by establishing alliances we can do more things for citizens,” said Darias, who also recalled that this agreement means that people who want to oppose the AGE in Spain, will no longer have It is compulsory to go to Madrid, thus avoiding travel expenses, living expenses and overnight stays.

Bringing the Administration closer to the citizens

This initiative, Carolina Darias recalled, was one of her objectives for the legislature: advancing in territorial cohesion and social cohesion means bringing the Administration closer to the territories.

However, it has continued, the pandemic caused by COVID-19 has accelerated the implementation of this measure, through legal instruments. Specifically, the resolution of the Secretary of State and the resolution of the Secretary General of Public Function of July 30, to carry out this selective process, enabling the corresponding court, establishing the form, the procedure, the use of telematic means, encryption and ensuring confidentiality. “We do it by looking at who does it well, the UNED”, added Darias.

Today between 900 and 1,000 opponents have appeared, of which 35% have been examined in their respective territories, which implies “a clear commitment to decentralization and relocation,” as stressed by the minister, who also recalled that The measure responds to the objective set by the Prime Minister of “bringing the Administration closer to the territories.”

“The Government of Spain is determined to facilitate access to public employment from anywhere in the country” and “to attract talent to the public sector, because the value of the public is always important, but more so in this time when it has become essential “, emphasized Carolina Darias