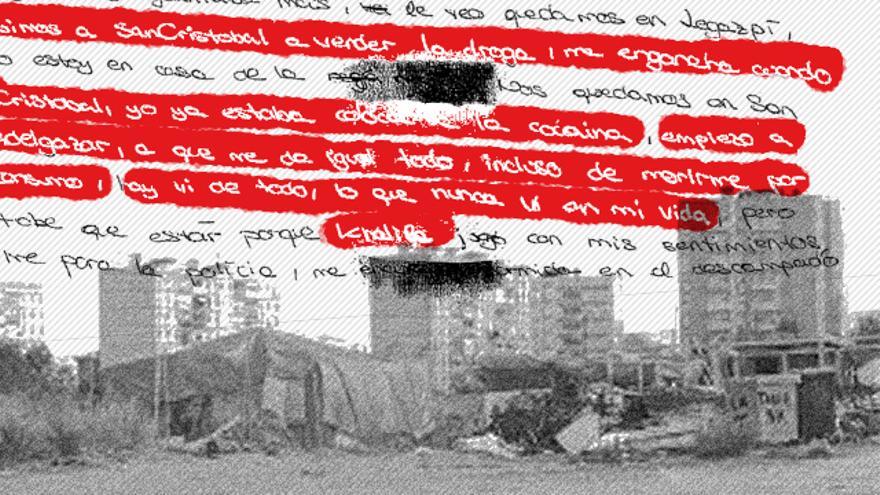 The Avenida de Andalucía is an option to travel the first section towards the happiness of the people of Madrid who go by car to the beaches of Cádiz. Before leaving the city, they leave, to the right and left, the districts where it is most difficult to live and where one dies first. From the traffic lights that plague the urban artery, it is difficult to distinguish the stories that support these official statistics. And yet, they are there, a few meters from the side of the road.

A few stops from Puerta del Sol, a direct metro line, the five scenes reported below took place and to which the judge, the prosecutor and the policemen of Operation Sana confer the necessary credit so that some of their alleged perpetrators remain in pretrial detention. Warning: in all of them appears the small body of a teenager, of six girls in total, subjected to a hell of sexual assaults and addictions. Police are investigating four other cases..

When the Police found H, on June 23, a few days ago he had turned fifteen. They found her in a shack in the town built, demolished and rebuilt in San Cristóbal de Los Ángeles, the neighborhood that divides Avenida de Andalucía in two. With her there were two adults and one of them had had sexual relations with the girl. Probably in exchange for drugs. The shack is used by junkies in the area to smoke base, a substance that is cheaper than cocaine and that causes a stronger and shorter high. When H does not consume, he has pain throughout his body. The agents were looking for her due to a complaint from a relative.

H's parents separated and left the girl with an aunt and her cousins ​​when she was 4 years old. Although their relationship was not good, it was always better than the seasons with his father. He is an addict who lives in a occupied house in Vallecas. He taught the girl to consume, to steal... and he prostituted her. H calls the slum where it happened "the little house". He and his father needed 70 euros a day, 35 each, and H brought them. One day the Police stopped the minor and in her backpack she did not have books or pajamas to sleep at the home of a friend from the 'insti'. Inside was lubricating gel, wipes, underwear. Relatives say that H has a soft spot for his father.

The teenager had to reside in a center for minors in the Community of Madrid, but the regime is open and she continually escaped. The workers denounced him. It was of little use. One of them told the Police that H always seeks "the affection of adults and that they do what they want with her." Especially her father, who "sold" her to a certain Kalifa, of Dominican origin, in exchange for two bags of cocaine, according to what she herself said. The parent stopped prostituting her so that someone else would continue to do so.

Kalifa also took drugs with her, they slept together and distributed her as sexual merchandise to whoever in the village wanted to pass the base high by having sex with a minor. H told things to the policemen. He spared no details. There was a Romanian man in his fifties who "disgusted" him, but he needed the money for drugs. She also talked about other girls, minors like her.

The summary includes a report from the director of the Aranjuez juvenile center. Concerned about the situation, they manage to contact the mother. She tells the social worker that she thinks H is with her father and that they are using drugs together. "The information is confusing, when asked why he does not contact the residence or the Police when this happens, or why he does not go looking for his daughter, he shows indifference. There is no perceived anguish or nervousness before the situation," the report reads. With this indifference, the mother recounts an encounter with H. The girl told her: "I've fucked two for 20 euros and a half gram." According to the mother, he then left to give his father the 10 euros that corresponded to him.

In March, H returned to the juvenile center. Despite being 14 years old, he was aware of what was happening to him, of how his addiction was growing, of the risk he was running on the street. And he wanted out of it. She returned to school and asked her new classmates not to incite her to make trouble. He told the workers at the center that he was "happy." He lasted ten days before running away again. It took time for the doctors to detect that he had scabies. She was found again in the company of her father, covered in bruises, very thin… In her backpack she had condoms, a razor and a hotel card. He fled again in less than 24 hours.

On the afternoon of August 31, the day before Madrid returned to normality in September, a girl burst into the middle of the street in the Usera neighborhood asking for help. C told the tobacconist that she had been kidnapped for three days on the ground floor of a building, watched over by an "old gypsy" and repeatedly raped by "a Dominican" from whom she had escaped while she slept. She did not want to file a complaint, but asked to be taken to a doctor. On the Twelfth of October, the doctors verified that he was bleeding from the anus.

Finally, it was the director of the Paracuellos del Jarama juvenile center, where he lived, who went to the Civil Guard. The girl said that she has a Dominican boyfriend, different from the one who had abused her, whom everyone calls Kalifa. When the information was transferred between police forces, the agents of Group XXII of the Judicial Police Brigade knew immediately that H's was not an isolated case.

The police had already heard a protected witness statement about another of Kalifa's girlfriends, also a minor, who was "deadly in love" with him. It was about the girl raped for three days. In addition, H had also talked about a house where cocaine was smoked and which belonged to an older gypsy woman. C had spent three days without eating or being able to go to the bathroom. He had urinated on himself. He is 14 years old.

Three months later, on November 22, the Police arrested the Kalifa, Ronaldo Antonio M. C, 25 years old. The night before he had beaten up C, whom he had continued to prostitute since the August episode. In the morning, she fled after waking up and seeing him on top of her with an ashtray in his hand, about to hit her. "Son of a bitch, bitch, go away and don't come back," the Kalifa said before C managed to reach the street.

The investigation, at times, has had to go backwards. Searching similar cases, the agents found the statement of a woman who in February 2020 had gone to the police station desperate because her daughter was running away with Dominican gang members to consume drugs. She says she is hooked. She knows that A and his pimps move around Villaverde because they have no problem photographing themselves in the area and posting it on Instagram. The woman points to the shacks of San Cristóbal. On one occasion he went to pick up his daughter and found her almost unconscious. The woman talks about a certain Ismael Rafael DM, a guy with an eight-year prison sentence.

When Operation Sana starts, the police obtain the testimony of a minor who speaks of A. She is about fourteen years old and the Dominican her mother was referring to is known as Chuky. "She's very hooked. She likes Dominicans and goes with them in exchange for drugs. It was Chuky who met the girl on Instagram, he started giving her joints until she slept with him," says a witness, who assures that A has a mental disability.

L told the police that she did not take drugs, that the others did. That the only bad thing he had done was transport packages for the "Dominicans", but when he realized that they were carrying drugs, he left him. A month before that statement, last September, there is evidence of an arrest for drug trafficking with two men. The police believe that she also practiced prostitution.

D has escaped on many occasions from the juvenile center. It is evident because those responsible have always denounced it. In his statement, he told the police that he had seen older and underage women in the shacks of San Cristóbal having sexual relations with "Dominicans, Moroccans and Spaniards" in exchange for "a kind of white stones wrapped in transparent plastic bags." . What she did not mention is that she was also used for drug trafficking.

L and D were born in Morocco 17 years ago. On September 21, the Municipal Police found them entering a car in the Marconi estate, the scene of street prostitution in the south of Madrid. They were next to a 59-year-old man. He said that he saw them unprotected and that he agreed to take them to the center. L was quick to say that they are not prostitutes, that she and her friend only go to Marconi to smoke base and that the guy in the car was going to take them to Madrid in exchange for 5 euros.

When the policemen made the checks, a dozen people have been approaching and greeting "warmly and friendly" the two minors, according to the police record. "I already have yours!", one of those people shouts at the girls despite the fact that the police are in front. In the backpack, L carries perfume and 50 euros. He says that the money was given to him by his grandmother. The man and she go free. D is transferred to the police station because she is aware of a claim from the Guadalajara juvenile center.

In that same polygon M appeared after a day disappeared. Another patrol was checking the area when they spotted M lying in front of a shack. It was five o'clock in the morning. She is Venezuelan and is 15 years old. The researchers believe that she was also prostituted by the Kalifa and his entourage. H had told the police: "He is going through and suffering the same as me."