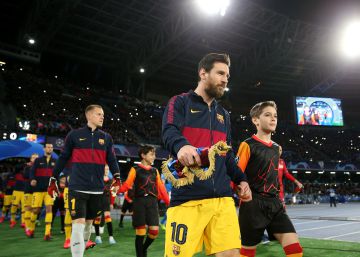 Although in the last hours the idea that it is actually a strategic movement that seeks the immediate resignation of the president of Barcelona, ​​Josep María Bartomeu, the burofax sent this Tuesday by Lionel Messi to the Barça club requesting the application of the One-sided termination clause in his contract unleashed a wave of reactions. One of the most relevant was that of Carles Puyol, captain during the best years of the entity and a man of marked institutional character, little given to controversy. “Respect and admiration, Leo. All my support, friend ”, expressed through his social networks the former player of the Spanish team. His words were immediately applauded by Luis Suárez, one of Messi’s trusted men in the dressing room and whose dismissal, communicated by phone by the new coach, Ronald Koeman, after becoming the Uruguayan this season the third highest scorer in history of the club, with 198 goals spread over six years, has been one of the last drops that has filled a glass that had been filling for years.

Whatever the final resolution of the conflict, it is clear that something has been definitively broken between Messi and Barcelona, ​​and although the majority of the fans for now are in favor of the continuity of the Argentine, there is no lack of voices that speak of what it is about an opportunity to close a stage and start from scratch. They do not see it that way from the club, whose only official reaction so far has been to demand through their technical secretary, Óscar Planes, that everything continue as it has been until now: “We are going to fight for the marriage between Barça and Messi to continue. We want to build a new winning cycle with him”, Said Planes in the presentation of the young Barça pearl Francisco Trincao.

Experts in business, negotiation and management teams are clear: at this point, it is best to open the door. “Good leaders leave when the company is at the top, not when everything is in crisis. But leaving when all is well is really difficult. There is a moment when inertia takes you, ”explains Carlos Alemany, who has lived through these processes countless times as a partner at Alemany & Partners. For him, the ideal moment for Messi to leave was a couple of years ago, when he still had the love and respect of the fans intact despite the fact that the team no longer worked as in its best days. Eugenio Hernández, from Seeliger y Conde, agrees with him: “The moment to leave comes when the leader no longer feels illusion, when he no longer transmits passion. Lacking that, everything else will always be missing ”.

To prevent these types of exits from being so traumatic, experts agree on a key factor: articulating a succession plan. “Choosing a good candidate to succeed a leader who has been important avoids many problems,” explains Valentin Bote, director of Randstad Research.

The EAE Business School human resources professor Santiago Ávila, however, understands that Messi is not a true leader. “He’s a technically fantastic player, but he doesn’t have the mentality to lead, to pull the rest of the team through tough times,” he says. In any case, the problem of Barça is not fixed in the dressing room, insists the expert, who points out that what is truly worrying is the lack of leadership of the club’s management. “They have been looking to the crowd for years to act. True leadership is not doing what everyone wants, but what is due”, He insists. He talks about the lack of support that recent coaches have received, whose authority was seriously undermined. An issue that is repeated in the business world when bosses are bypassed and that responds to a lack of trust. “When you delegate, you have to let the other person work, even if they make decisions that you don’t like,” he concludes.

The lack of communication is what has ended up causing the situation to explode, according to Carlos Royo, a professor at Esade. The method chosen to communicate the low evidence of this situation, although the expert does not only blame the player, since he defends that the company must leave space for the workers to correctly express what they expect of them and, from there, engage in real negotiation. Now it is too late for this because Messi has not left any door open. “When we talk about formal contracts, we are talking about courts, and there the commitment has already gone out the window”, illustrates the teacher. Likewise, he takes advantage of the occasion to warn companies: “Difficult times are coming, and it will be vital that middle managers are very close to the emotional needs of the workers.”