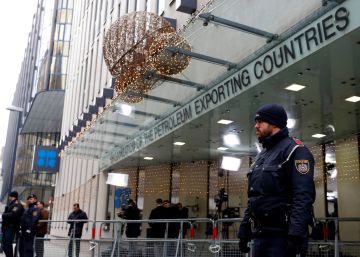 More production cuts to try to avoid that, the imbalance between supply and demand, lowers the price of crude. The Organization of Petroleum Exporting Countries (OPEC) and a dozen external partners, including Russia, have agreed this Friday in Vienna (Austria) to redouble the cuts in the pumps started in 2017. The decision, which arrives in full exit to the stock exchange of the Saudi state-owned Aramco – it will debut next week in the local market – it implies a reduction of half a million barrels per day (0.5% of global production) in the supply of crude oil for the first quarter of 2020. Oil has been responding to the news, anticipated since the beginning of the week – detail of figures on the margin – with strong increases: in the last three days, Brent barrel, the reference in Europe, has rebounded a little more than 3% in three sessions. "Era", has justified the Russian Minister of Energy, Alexander Novak, "necessary to balance the market".

The increase in US and Canadian production explains much of the recent imbalance in the global energy market. Both North American countries, uploaded respectively to the carriage of hydraulic fracturing and oil sands, have doubled their pumping in the last decade. An irruption through the big door in the world oil Olympus with which it has not stopped scratching market share to OPEC countries, which have seen their influence eroded – today they barely add up to 40% of world production – and have gone redirecting its operations to Asia, an area of ​​low production. The news that September was the first month in four decades in which the United States was a net exporter crude oil says a lot about a sector that has turned around in a few years. Being a net oil exporter means that, with the oil it produces, it could supply its entire internal market and there would still be room to sell to third countries. In practice, however, exchanges continue.

For both OPEC members and the 10 external partners that have joined the pact (the so-called OPEC +), the cut in the offer is not free. Being, as they are, economies highly dependent on the export of crude oil and derivatives, a reduction in pumping is also a reduction in both growth and public revenues. The first tensions in the club have already begun to have consequences: Ecuador, which he returned to the cartel in 2007 after 15 years out, has recently announced its departure from January 1. Its objective: to deal with some more slack with its particular fiscal crisis and try to revitalize its GDP, which this year will be noted a zero expansion (of 0%).

In search of rebalancing

In 2018, the world produced a million more barrels than it consumed – 100.3 versus 99.3 -, according to data from the BP statistical yearbook, a year in which the global economy has not stopped losing bellows dragged by trade tensions between the US and China. A gap that is equivalent to the current production of two traditionally oil nations such as Libya or Algeria. The International Energy Agency (IEA, for its acronym in English) expects the market to begin to rebalance this year, a path that should follow in 2020, with demand exceeding supply and forcing full inventories after a long run of low prices.

Many specialists link the OPEC decision with an attempt by Saudi Arabia to try to push up prices to ensure an initial quotation of its state oil company, Aramco, as calm as possible: at higher selling prices, they argue, the higher their profits will be. Others, such as Gonzalo Escribano, of Royal Elcano Institute, they don't see such a direct relationship. "The more the price goes up, the more the company will have to pay to the Saudi State," he says. "In the range of between 60 and 80 dollars everyone is happy." In those there is the poster: the new pact can be enough to support the price, but not to shoot its price in the medium and long term.

The AVE already eats the plane without prohibiting routes